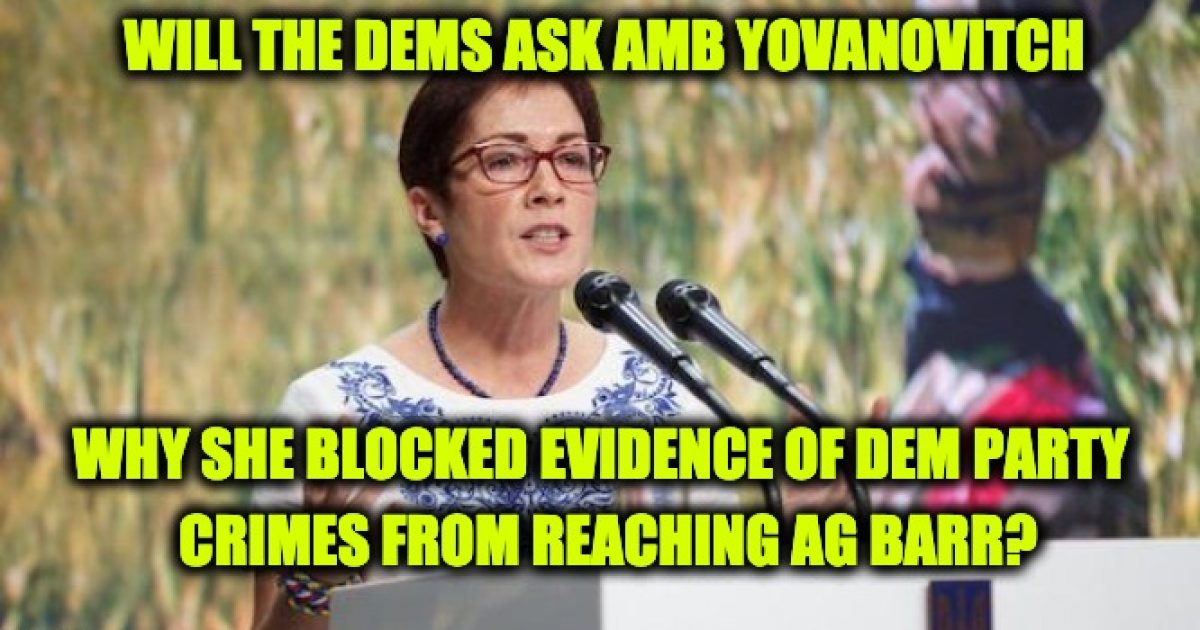 Today, Friday, October 11 former US Ambassador to Ukraine, Marie Yovanovitch will testify to Adam Schiff’s Democratic Party hit squad about Rudy Giuliani’s attempts to get evidence of Ukraine Interference with the 2016 election and the Hunter Biden scandal. As Shiff’s team doesn’t care about the truth, it is doubtful they will ask her about the Senior Ukrainian prosecutor’s charge that  Ambassador Yovanovitch prevented him from presenting evidence of Democratic Party and Hunter Biden wrongdoing to AG Barr.

Ambassador Yovanovitch is a career diplomat (since 1986) who was appointed by former President Obama to be the US representative to Ukraine in August 2016 and was removed by the present administration fired in late May of 2019.

Kostiantyn Kulyk deputy director of Ukraine’s Prosecutor General’s International Legal Cooperation Dept. told John Solomon in April that for a year he’s been blocked from getting visas for himself and a team of senior law enforcement officials to go to the U.S. to deliver evidence of Democratic party wrongdoing during the 2016 election to the DOJ.  The senior prosecutor said he never was able to make the trip because the visas were blocked by the U.S. Ambassador.

We were supposed to share this information during a working trip to the United States,” Kulyk told me in a wide-ranging interview. “However, the [U.S.] ambassador blocked us from obtaining a visa. She didn’t explicitly deny our visa, but also didn’t give it to us.”

One focus of Ukrainian investigators, Kulyk said, has been money spirited unlawfully out of Ukraine and moved to the United States by businessmen friendly to the prior, pro-Russia regime of Viktor Yanukovych.

Ukrainian businessmen “authorized payments for lobbying efforts directed at the U.S. government,” he told me. “In addition, these payments were made from funds that were acquired during the money-laundering operation. We have information that a U.S. company was involved in these payments.” That company is tied to one or more prominent Democrats, Ukrainian officials insist.

In another instance, he said, Ukrainian authorities gathered evidence that money paid to an American Democrat allegedly was hidden by Ukraine’s National Anti-Corruption Bureau (NABU) during the 2016 election under pressure from U.S. officials. “In the course of this investigation, we found that there was a situation during which influence was exerted on the NABU, so that the name of [the American] would not be mentioned,” he said.

As we reported in late March, the former Ukranian Government is known for being very corrupt, and that includes the head of the  NABU  Artem Sytnyk. A prosecutor other than Kulyk is investigating Sytnyk for trying to help Hillary to win the 2016 election, which was initially reported two years ago by Politico.  Because of the suspected involvement by NABU, which had a close relationship with the U.S. Ambassador and the FBI agents in Ukraine Kostiantyn Kulyk wanted to personally deliver the evidence to the DOJ rather than giving it to the American officials in his country.

What is hard to understand is there have been reports of senior Ukraine officials trying to help Hillary win the election for two years, why hasn’t the U.S. Ambassador granted the prosecutor a visa. Is Ambassador Yovanovitch part of the deep state part of the plot to overturn the 2016 election? It seems like it.