What Every Gentile And Secular Jew Needs To Know: A Yom Kippur Primer 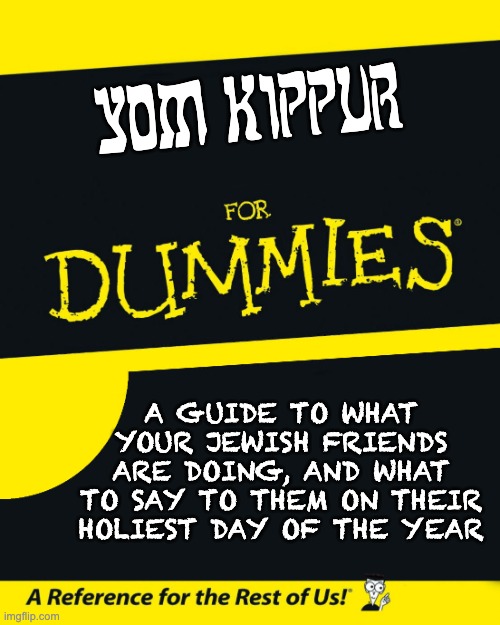 Wednesday night (10/15/21) at sundown begins the holy fast day of Yom Kippur. To my Friends in the Gentile community (we call you Goyim, which is not derogatory, it means nations), In biblical times, we believed that there were seventy nations. During the next holiday (Sukkot), seventy bulls were sacrificed, one for each of the seventy nations. Yom Kippur primer

I’m sure you have heard of Yom Kippur and loosely know it’s a fast day, but do you know what’s really happening behind the walls of your friendly neighborhood Synagogue or in your Jewish neighbor’s house?  The below tries to explain Yom Kippur to you in a way you might enjoy…at least it won’t be too Jewish, which is something that Gentiles and secular Jews will appreciate.

Yom Kippur is one of only two 25-hour fasts on the Jewish calendar (the other is Tisha B’av).  Tisha B’av is a sad fact as we memorialize all the bad things that happened to the Jewish people on that day, and there were many. The two most serious were the destruction of the first and second Holy Temples to God atop Mount Moriah in Jerusalem. But there is a long list of other things, including the Jews being tossed out of Spain in 1492 or Barack Obama making the keynote speech at the 2004 DNC that positioned him to become the 2008 candidate.

Yom Kippur is a happy fast. Jews are working hard to get close to God, which is the greatest joy possible.  In Biblical times it was the one day a year that the high priest was allowed to enter the “holy of holies,” the most sacred part of the temple. Note; High Preist (Kohen Gadol) is a job title. It isn’t about an intoxication level.   The first Kohan Gadol was Moses’ brother Aaron, and the ones that followed were Aaron’s descendants.

On Yom Kippur, the holiest day of the year, the holiest person, the High Priest,  entered the holiest place on earth, the Holy of Holies chamber in the Temple sanctuary, where he would pray on behalf of all his Jewish brethren and secure their atonement. During the first temple period, the Ark of the Covenant, containing, among other things, the stones of the ten commandments Moses brought down from Mt. Sinai, was in that holy chamber.

Only the Kohan Gadol was allowed in the holy of holies and only on Yom Kippur. We are told that when the Kohan Gadol entered the Holy of Holies, a rope was tied to his ankle so that if he died while in, there would be a way to get his body out. If he was impure when going into that sacred sanctuary, he would not survive. In other words, God took the atonement thing seriously. Keep in mind there is no record of any Kohan Gadol dying during the Yom Kippur ceremony.

As there hasn’t been a Kohan Gadol since the destruction of the second Temple, on Yom Kippur us regular Jews fast. Fasting on Yom Kippur means giving up much more than food. We give up nourishment, sex, washing, applying lotions or creams, and leather footwear. But let’s face it, after giving up food and sex, do the other three really matter?

Sandy Koufax made national headlines when he refused to pitch in the first game of the 1965 World Series because it fell on Yom Kippur. When Koufax’s replacement Don Drysdale was pulled from the game for poor performance (giving up seven runs in less 3 innings) he said to Los Angeles Dodgers’ manager Walter Alston, “I bet you wish I was Jewish, too.”

While it’s is called the day of atonement, atonement is not the reason for the fast. Fasting is not meant as a sign of our atonement. We do not deny ourselves ice cream, suffer caffeine withdrawal headaches,  and forgoing connubial relations as some sort of sacrifice to God. The Rabbis say we are fasting because we are concentrating so hard on getting as close as possible to the Lord that we don’t have time for the other stuff. That’s why it is a happy fast because we believe there is no greater joy than getting closer to God.

If you live in a state where COVID restrictions haven’t banned people from attending religious ceremonies, and you happen to see one of your Jewish friends walking to shul (synagogue) on Yom Kippur, there is no need to hide. Thankfully the caffeine withdrawal headaches or the hunger pangs Jews get on Yom Kippur are not contagious.  Guide To Yom Kippur

Should you want to know what to say to your Jewish friends. allow me to suggest you avoid, “Hey, you hungry yet?”  Two good things to say are, “have an easy fast” or “Gmar Chatimah Tova,” which means may God seal you in the book of life.

No, we don’t really believe the creator of the universe spends Yom Kippur sitting on a heavenly throne writing people’s names in a book (if he did, I am sure he would have a powerful iPad-like machine with tons of RAM). The book of life is just a metaphor and not meant to be taken literally. If there was a book of life, just try and imagine the size of the bookshelf where it would be held.

Note to my Gentile friends if you see a Jew walking to on Synagogue on Wednesday night, ” Hey wanna come over for a beer after temple,” is NOT a proper greeting either (neither is the term Temple. There were only two Temples in Jewish history they were atop Mount Moriah in Jerusalem. The last one was destroyed by the Romans in the year 70 CE).

The mental image of God with the book of life is a theme throughout the ten days of awe, beginning with Rosh Hashanah and ending with Yom Kippur. On Rosh Hashanah, we say may God put you in the book…. and then on Yom Kippur, we assume we were put in the book, so we change it to may God seal you in the book, possibly with the assumption that God closes the book at the end of the fast. But in the Jewish faith, there are always opportunities to return to the right path. We believe that God welcomes atonement at any time (but it is easier to do it on Yom Kippur because we have the support and encouragement of the community ).

Judaism emphasizes community. That’s why the Jewish people are called Am Yisrael,”  the nation of Israel, instead of “Dat Yisrael,” the religion of Israel. Think of a fireplace. Take one ember out of the fire; it quickly dies, but leave it with the rest of the fire. It continues to burn. The faith of a Jew who remains as part of the community continues to burn in his heart.

The Yom Kippur fast will end an hour and ten minutes after sundown on Thursday night. For most Americans, this will be a very unusual year. Usually, using a computer or television is taboo on the holiday.  But for the second straight year, because of CoronaVirus, many American Jews will be attending services via Zoom or a similar program.

Gentiles Please Note: If you live in a community where there are live, in-person Yom Kippur services, I strongly recommend you stay out of the way of the throng of Jews leaving the Shul and heading for nourishment at the end of the holiday. It is more dangerous than getting between Senator Chuck Schumer and a TV camera or Rep. Eric Swalwell and the Chinese Spy Fang Fang.

You will be able to tell the mob is coming because Yom Kippur ends with a loud blowing of the Shofar (it has nothing to do with a man driving a car, it’s a ram’s horn converted into a very loud musical horn).

To help Jews remember the day they spent in fervent prayers, many synagogues (including mine) give the children plastic Shofars as the kids leave shul at the end of the holiday. The toy shofars are louder than the real ones. These plastic noisemakers incite even more prayer. Each and every time one of those dear children blows that obnoxious sounding toy, their parents can be heard groaning, “Oh God!”

It is a tradition that after Yom Kippur is over, Jews go to the homes of friends and/or family and consume large quantities of whitefish, bagels, and/or blintzes. There are three reasons for this:

First of all, we can play the time-honored game who suffered the most:

“You think yours was bad? Heh! Not only do I have the Yom Kippur a headache, but my Rabbi’s sermon was six hours long, and he copied it from the Democratic Party position papers.  It was so bad few congregants killed themselves so they wouldn’t have to hear him speak anymore.

The final reason is that we shouldn’t go near non-Jews after the holiday (NO, this is not some sort of Hebraic bigotry, nor is it a commandment). We are trying to do you Gentiles a favor. Along with the activities I mentioned above, during the 25 hours of the fast, we are not allowed to wash, bathe, or put on any lotion or scent. We haven’t brushed our teeth or used mouthwash either. After almost a full day of hanging out with other Jews in what always seems to be a hot Synagogue, the Jews cease being “God’s chosen people.” Instead, we become “God’s Rather Pungent People.” Therefore after the fast, we tend to hang amongst ourselves because no one else would be able to take the noxious aroma.

Before I end this Yom Kippur primer, allow me to take this opportunity to warn you that another Jewish Holiday, Sukkot starts the evening of September 20th  at sundown, which means that Friday the day after Yom Kippur, and continuing on Sunday and until sundown on Monday is the most dangerous time in the Jewish calendar. The source of the danger is that we build these little huts called Sukkahs. For most American Jewish men, it is the only time each year that we use tools. Believe me–that is a danger. There are times when building my Sukkah you may hear me curse in tongues I didn’t know I knew. More on that after Yom Kippur.

Until then, from the bottom of my heart, I would like to wish all my Jewish friends an easy and meaningful fast. And to all my friends, both Jewish and Goyish:

Gmar Chatimah Tova
May you be sealed in the book (or iPod) of life for a happy and healthy New Year.