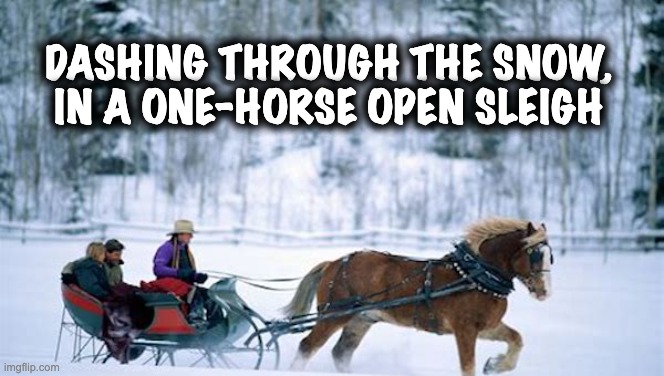 The school’s concern about “Jingle Bells” was partially linked to a 2017 article written by Kyna Hamill, the director of Boston University’s College of Arts & Sciences Core Curriculum, according to the Beacon. Hamill’s article explored how the song originated, which included its existence as “a product of the minstrel stage in Boston” during the mid-1800s.

Right now, we’re talking about one school district, but keep in mind woke stupidity spreads faster than the omicron variant.

While it’s true that some minstrel songs are racist, but not all are racist, and some have had racist lyrics removed.

Another minstrel song Steven Foster was Swanee River.  It’s the state song of Florida, whose real name is Old Folks At Home.  Does that mean in the 1850s, retired Jews moved to Florida like they do today?  That is why the state is known as God’s waiting room.

This is the song that begins,   “Way down upon de Swanee Ribber, Far, far away.” That song also had a racist phase that was changed as it also used darkies.

Florida got enlightened in 1978; we substituted “brothers” for “darkies”. There were subsequent revisions. At Jeb Bush’s second inauguration as governor in 2003, a young black woman gave a moving, nondialect rendition of “Old Folks at Home”, except “still longing for the old plantation” came out “still longing for my old connection”

Other minstrel songs written with racist lyrics that are now acceptable because the lyrics were re-written include Yellow Rose Of Texas, Shoo Fly, Don’t Bother Me, and the former state song of Virginia, “Carry Me Back to Old Virginny.”

Concern also stemmed from possible interpretations of the song’s lyrics that could include slave imagery, according to Allison Rioux, the assistant superintendent for curriculum and instruction at Brighton Central Schools.

Rioux told the Beacon that some people “suggest that the use of collars on slaves with bells to send an alert that they were running away is connected to the origin of the song ‘Jingle Bells.'” Rioux added that the school was “not taking a stance” about the lyric’s meanings, but “we do feel strongly that this line of thinking is not in agreement with our district beliefs to value all cultures and experiences of our students.”

OH PULEEZE!  One person believes the song may have a connection to slavery, but there’s no proof.  And has never been used as a racist song.

Will these woke crazies go after Frosty The Snowman, which angers the green new deal people because Frosty has “two eyes made out of coal.” The most racist Christmas song is White Christmas.  The white comes from the color of snow.  But the crazies will demand the lyrics be changed to bi-racial Christmas.  To be honest, I won’t have a problem with the change if they can get Irving Berlin’s approval.  Of course, Irving’s been dead since 1989, so they are out of luck.  They might demand a change in Chestnuts Roasting On An Open Fire because the line “folks dressed up like Eskimos” is “cultural appropriation.”  Santa Claus is Coming to Town encourages children to become peeping Toms.  “He sees you when you’re sleeping.  The only way for Santa to know that is to look through a kid’s window.  Speaking of Santa, he doesn’t go to Jewish homes.  He might be an anti-Semite.

The above is ridiculous—most of the cancel culture wokism is ridiculous.  Jingle Bells was never racist.  That claim was invented.  Let the woke crazies pick the songs they want to sing without bothering our children.

Although there is one song, I would demand that the woke crazies learn.  Kind of like a song mandate.  A song that sends the woke crazies a message from the Americans who are sick and tired of wokeism.  The song embedded below is called Shaddap You Face.