Woke Breastfeeding Group Goes with ‘Chestfeeding’ Because ‘Breast’ is too Feminine 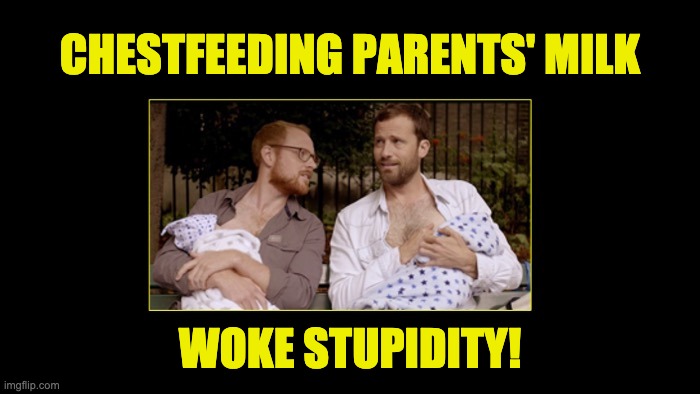 Every time one thinks that wokeism has hit rock bottom, someone pushes the stupidity even lower. woke breastfeeding

The Academy of Breastfeeding Medicine has gone woke and will now use the term “chestfeeding”  instead of “breastfeeding” because saying “breast” is too feminine. Once again, we see an organization that claims to be based on medicine and science pushing woke nonsense and bending to left-wing politics instead of abiding by science.

The organization made its woke announcement in a lengthy statement published last week that encourages employees to use absurd terms such as “chestfeeding,” “human milk feeding,” and “parent’s milk” to promote what it calls “gender-inclusive language.”

My wife er, chest fed both of our kids. My wife is a human—therefore, what she was doing could be classified as human milk feeding, although it’s hard to understand why anyone would use that extended language. However, if my kids had to survive on both “parents’ milk’ instead of mother’s milk, they would have been starving babies. There has never been any nourishment coming out of my moobs (man boobs).

The statement on “infant feeding and lactation-related language and gender,” co-authored by eight doctors and the academy, says “the use of de-sexed or gender-inclusive language is appropriate in many settings.”

Gee, I can only think of one setting where it would be appropriate.  It would be apropos where wokeness has gained so much acceptance where people start talking like idiots, and the men start wearing BROssieres.

“ABM recognizes that not all people who give birth and lactate identify as female and that some of these individuals identify as neither female nor male,” the group exclaimed.

If self-identifying works, how come when I tell people I self-identify as a male with a full head of hair and six-pack abs, people around me laugh.

When will women get tired of the left erasing them?