Was FDR A Victim Of The “Deep State”? 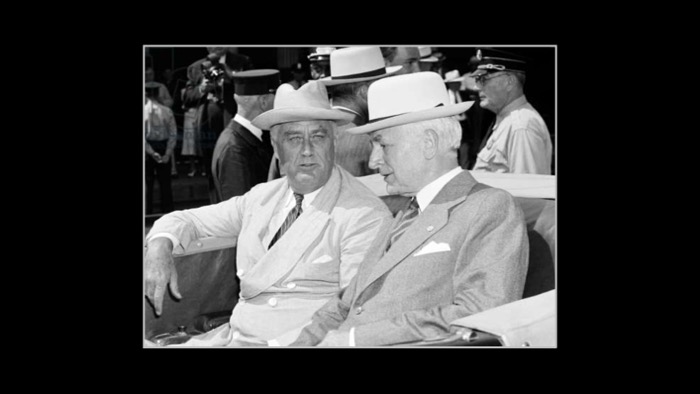 Some supporters of former President Donald Trump believe that a group of entrenched bureaucrats, called the “Deep State,” prevented Trump from carrying out many of his policy initiatives.

Filmmaker Ken Burns is a strong critic of Trump, yet Burns seems to have embraced a version of the Deep State idea in his forthcoming documentary about America’s response to the Holocaust. According to Burns’s narrative, President Franklin Roosevelt wanted to help the Jews in Europe but was obstructed and undermined by his own State Department.

In other words, the “Deep State Department.”

Burns recounts how State Department officials went out of their way to block Jewish refugees from entering the country. In eleven of FDR’s twelve years in office, immigration from Nazi Germany and other countries was kept far below what the existing quotas would have permitted.

What Burns does not explain is that the State Department was implementing FDR’s policy, not sneaking around behind the president’s back. In one 1935  letter to New York Gov. Herbert Lehman, Roosevelt bluntly noted that “nearly all immigration quotas have been considerably under-issued during the past four years.” And that’s how he wanted it.

Assistant Secretary of State Breckinridge Long, who was in charge of the department’s visa division, wrote in his diary—never intended for publication—that he briefed the president on the tactics that he and his colleagues were using to restrict immigration. In one diary entry from 1940, Long wrote that in a discussion at the White House on ways to curtail immigration, he “found that [FDR] was 100% in accord with my ideas” and “expressed himself as in entire accord” and “wholeheartedly in support” of what Long and other State Department officials were doing.

Moreover, it was President Roosevelt himself who falsely claimed, at a June 5, 1940 press conference, that some refugees, “especially Jewish refugees,” had agreed to spy for the Nazis out of fear that their relatives back in Germany “would be taken out and shot.” That became a stock excuse for shutting America’s doors even tighter.

Burns’s film describes how American rescue activist Varian Fry saved more than 2,000 refugees in Vichy France from1940-1941, until the Nazis and their Vichyite collaborators complained to Washington, at which point Secretary of State Cordell Hull forced Fry to leave France.

Here, too, President Roosevelt is mysteriously absent from Burns’s story. It’s as if Secretary Hull was making up his own foreign policy. In reality, it was FDR’s policy to maintain friendly relations with Nazi Germany and Vichy France during the years prior to America’s entry into World War II. Hull’s action against Fry was part and parcel of the State Department implementing Roosevelt’s policy of appeasing Vichy.

Shortly after Hull acted against Fry, the Roosevelt administration publicly condemned De Gaulle’s Free French forces for liberating two islands off Nova Scotia that had been occupied by the Vichyites. And when the Allies liberated North Africa from the Nazis and Vichyites in 1942, it was FDR who decided to leave the Vichy Admiral Francois Darlan in power in the region. That was Roosevelt’s policy, which the State Department and War Department carried out.

Of course, Hull and Long were in the State Department in the first place was because President Roosevelt appointed them to those positions. FDR initially chose Long as U.S. ambassador to Italy, but Long had to leave that post after causing controversy by praising Mussolini (including the punctuality of his trains). Instead of getting rid of Long, Roosevelt promoted him to assistant secretary of state, putting him in charge of 23 of the State Department’s 42 divisions.

The president could have fired Hull or Long at any time if they were defying his policies. FDR repeatedly demonstrated that he was entirely capable of dismissing government officials who fell out of his favor for one reason or another—including his first two vice presidents.

President Roosevelt is often described as strong and decisive in leading America out of the Great Depression and against the Axis powers in World War II. How plausible is it to suggest that officials of the State Department, operating in broad daylight, would have been able to defy and undermine such a president?

The answer is that there was no “Deep State Department” working against President Roosevelt. FDR was indeed a strong and decisive president, and his subordinates implemented h  policies, including those concerning Jewish refugees, with his knowledge and approval—for better or for worse.