Analysis: The Biden Regime Has Declared War on Trump Supporters

Every American Should Tell Their Representatives In Congress To Stand Up To The Biden DOJ Abuses Of Power. 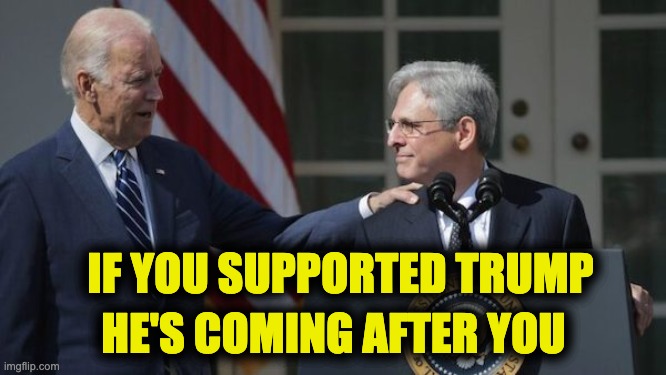 Since the Jan. 6 breach of the U.S. Capitol, the Biden administration’s Department of Justice has engaged in what appears to be a pattern of civil rights abuses against anyone who doesn’t accept the woke agenda or is a Trump supporter. Most recently, the FBI raided the home of former Mayor and Trump advisor Rudy Giuliani. In an exclusive interview with Fox News, Giuliani said the government is trying to frame him.

Giuliani said the agents showed him a search warrant that “sought the electronics in my apartment and purported to be about an alleged violation of the Foreign Agents Registration Act, FARA, for failure to file as a foreign agent on behalf of an unnamed Ukrainian official.”

Giuliani added, “They are trying to find something they can make into a crime, some technical violation, some mistake I made. They’ll take anything.”

Giuliani also accused the feds of illegally leaking information about the probe and described the FBI raid on his Manhattan apartment last week as “out of control.”

“Usually a person who has been a former assistant U.S. attorney, a U.S. attorney, a mayor, the associate attorney general, usually they receive a subpoena — not have their home raided,” Giuliani said. “The only lawyers they raid are lawyers for Donald Trump. I can’t think of another lawyer that has been raided other than lawyers for Trump.”

In an amateurish but potentially dangerous raid on an Alaska homeowner, the FBI conducted a no-knock warrant at the home of a woman who had attended President Trump’s peaceful Jan. 6 rally near the White House.

According to the Alaska Watchman:

Paul and Marilyn Hueper, owners of Homer Inn & Spa, woke with a start at 9 a.m. April 28 when a dozen armed FBI agents kicked down their front door in an investigation associated with Rep. Nancy Pelosi’s stolen laptop, which was taken during the Jan. 6 siege of the nation’s Capitol.

Speaking April 29 to Kenai-based radio host Bob Bird of the Bird’s Eye View, Paul recalled that he was alarmed and shocked to come out of his bedroom with seven guns pointing at him and his wife.

“It was a little alarming when I turned around the corner,” Paul said. “The first thing they did was start barking out commandments.”

Ultimately, the couple was handcuffed and interrogated for the better part of three hours before being released. In the end, it was a case of mistaken identity.

Tragedy was only averted by the victims of the FBI intrusion not grabbing guns to defend their home.

Americans for Limited Government condemned the Jan. 6 Capitol breach urging Trump supporters to reject violence. ALG President Rick Manning predicted that “any aggressive actions will be utilized by the radical left which will soon control the White House as an excuse to engage in draconian measures and to curtail liberties.” And that is exactly what is happening today.

We are seeing emboldened, weaponized Departments of Justice and Homeland Security based on the false narrative the left is pushing about what happened at the Capitol on Jan. 6. They have created what appears to be a national dragnet that seeks to ensnare Trump supporters, both high profile ones and everyday, average American citizens.

This abuse of government power cannot be tolerated.

America is worth fighting for. Our basic constitutional liberties, including the Fourth and Fifth Amendments, have been eviscerated by the administrative state at the DoJ that has been put on steroids by President Joe Biden and Attorney General Merrick Garland. Citizens of the United States have a right to the presumption of innocence, a right protecting them from the government engaging in malicious prosecutions against political opponents, and to be free from the surveillance state snooping into personal business with no probable cause.

In light of recent actions by the Biden administration, including the Alaska couple, which fortunately did not end up in gunfire and death as happened with Breonna Taylor, it’s time that Congress wake up regardless of party and stand against executive branch abuses of power and the ongoing politicization of federal law enforcement agencies.

To send a message to your representatives in Congress to stand up to Biden’s DoJ abuses, click here.

ALG has launched a site where anyone can go to send a message quickly and easily to their representatives in Congress to stand up against Biden’s civil rights abuses. If the executive branch becomes a hit squad to go after the president’s political opponents, then there will be no more liberty. After all, the Bill of Rights and subsequent amendments prescribe that the federal government should protect individual liberties from any government encroachment. When it comes to individual rights, there can be no compromise.