If Republicans Want To Win In 2024, They Must Reject Trump 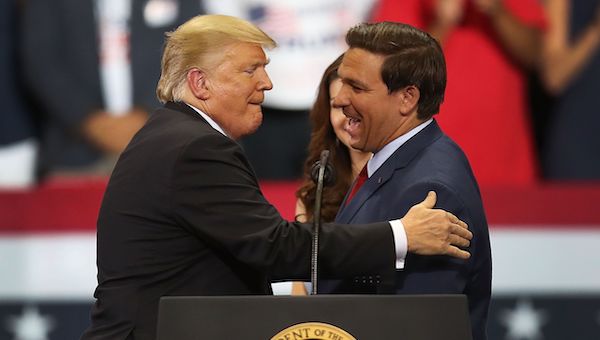 Donald J. Trump wants to be the Republican presidential nominee for a third consecutive election. It’s interesting timing since Trump has never been weaker or more unhinged. This is partly because he’s bored, but more recently because his favored candidates — for House, Senate, and governor — lost last week.

dd
Well, except J.D. Vance running for Senate in a red state and finishing an astounding 18 points behind the incumbent Republican governor. Vance was saved only by Leader Mitch McConnell when Trump refused to spend his own money.

Even during the constant drama of his lone term in office, Trump never showed his current desperation or “hit” others first. Now, he’s launching churlish attacks on Ron DeSantis and Glenn Youngkin — two successful governors who’ve never lost a race and wisely ignore the narcissist — because they present a superior alternative to him.

Before his conspiracy theories and aforementioned unprovoked slander, Trump’s first comments on election night were to celebrate Republican Joe O’Dea’s loss in Colorado; that unusual move is because Trump prefers that a Republican lose a Senate seat if that Republican isn’t a sycophant. His allegiance is to himself.

Trump is the Republican establishment now. He’s the default, the Man, the swamp. And he’s a loser. Republican voters must respond to last night’s profoundly disappointing midterm-election result by telling the new establishment to pound sand. https://t.co/NAY4YaFANl

Yes, there’s been just criticism of Democrats’ hypocrisy in pushing substandard MAGA candidates in the 2022 primaries. And the hypocrisy on the left will grow if they support Trump over GOP challengers, presuming he’s a losing bet in general.

Yet these risible candidates got nominated only because Trump handpicked them and his MAGA base supported them, despite their dubious electability.

One hopes the lesson has finally been learned that the 76-year-old is not the answer since he’s shown no proclivity to learn from his mistakes.

“Selecting a different presidential nominee would be in the interests of the country and party,” Ramesh Ponnuru argued in a Tuesday editorial seeking positives from last week’s disappointments. “Someone else would have a better chance of winning in 2024, a stronger likelihood of governing effectively and with regard for the party’s fortunes, and eligibility to run again in 2028.”
ttt

Recall that Trump didn’t win a majority in either of his presidential elections, and his average job approval rating during his presidency never approached 50%.

Trump won in 2016, courtesy of the unpopular Hillary Clinton and the Electoral College. Ultimately, he’s a plurality candidate with the advantage of running in races against the execrable Clinton and a feeble Joe Biden. And he still took only 46% of the vote both times.

What happens next? Some courage, humility, and honesty would be great.

Those serving at high levels of Trump’s administration, the most pro-Trump voices in Washington and his media apparatus, seldom share their true feelings about him in public. These are not brave people. If you’re a money-hungry cable news hack or an ambitious bootlicker in a safe congressional district, it’s easier to fecklessly bash party leadership.

Sadly, Trump has odious grifters who won’t leave, making his political obituary premature until Republican voters reject his brand. Now would be a perfect time to start.
v