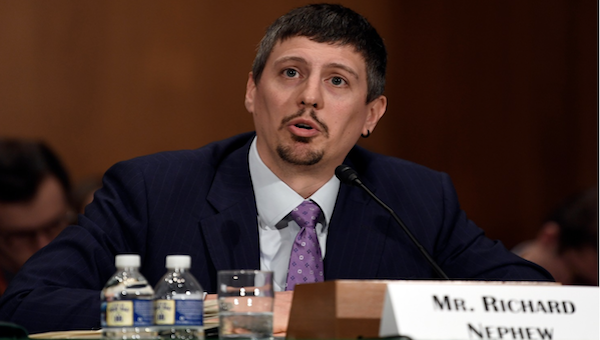 Facebook Twitter Flipboard
By A.J. Kaufman
Richard Nephew, deputy leader of the American delegation negotiating the fatally-flawed Iran Nuclear Deal (JCPOA), has resigned — and this is not a good thing. That’s because he correctly has a difference of opinion with the top envoy, the anti-Semitic, pro-terrorism, Iran-appeasing Robert Malley.

The Wall Street Journal reports that Nephew has long sought a tougher posture in negotiations, and not one conducted solely through European allies.

Nephew was a welcome voice on the global stage. One Iranian lawmaker said Nephew showed “Americans’ hatred of Iran is not limited to Republicans or Democrats.”

Malley, whose father was a close friend of Yassir Arafat, will never take a clear-eyed and strong stance against Iran as Nephew, yet sadly and tellingly, Malley won.

Unfortunately, with all the current chaos in Europe, this proves the Biden administration remains unwilling to increase pressure on Tehran.

Some disagreements between Nephew and Malley included enforcement of existing sanctions on Iran, which work as long as they’re fully implemented.

Nephew was instrumental in the years of sanctions that pressured Iran to come to the negotiating table — in 2013 under former President Barack Obama and 2021 under Biden, but after the Trump administration’s “maximum pressure” campaign.

One sanction in dispute, interestingly enough, is toward China since Beijing imports Iranian oil.

Nephew and his allies debated Malley about whether America should simply walk away from negotiations after the Iranian delegation ceased the continuation of futile talks in May 2021. Iran incredulously wanted to begin anew — while simultaneously announcing its plan to enrich uranium underground with advanced centrifuges.

Hapless Secretary of State Antony Blinken, who is also an Iran apologist, and other Western diplomats, now claim there are “only a few weeks left” to negotiate a return to the JCPOA. Return to what? Empty promises? Capitulation?

I suppose it’s good that time is fading since we needed to end this waste of time, energy, and money long ago.

Meanwhile, the public relations battle is seemingly what matters most to Team Biden. They will happily broadcast their generosity of giving Iran more time, so the American president can boast to his far-left base that he’s still trying to revive the ignoble deal.
A.J. Kaufman is a columnist for Alpha News, P.J. Media, and here at The Lid
Facebook Twitter Flipboard