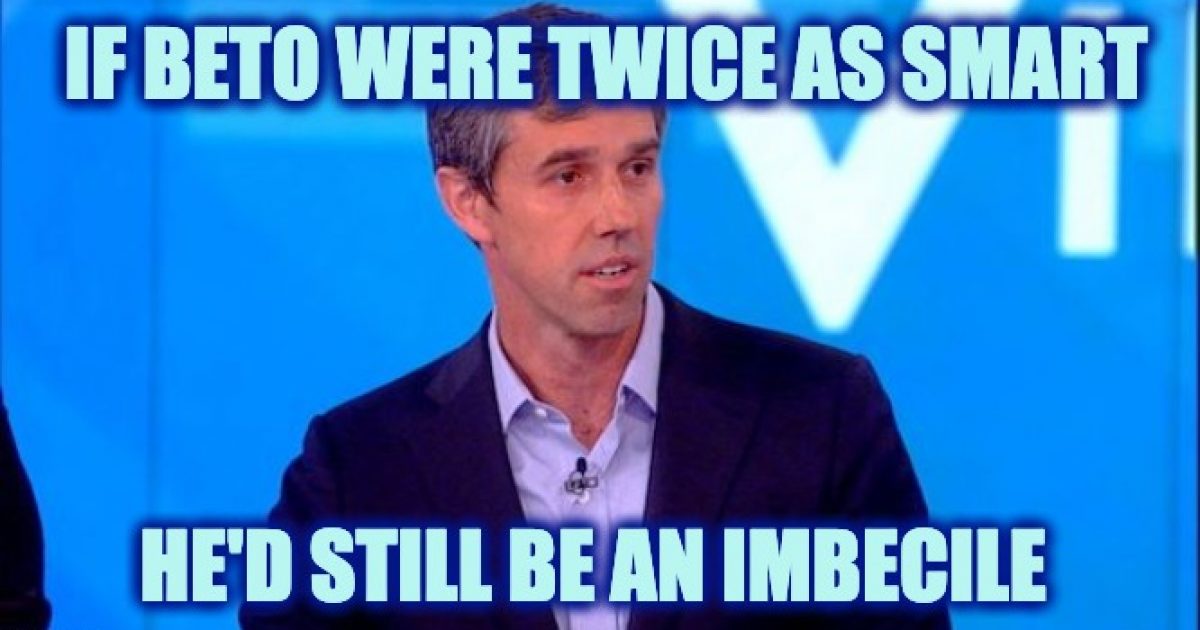 If had a dollar for every smart thing Beto O’Rourke says, I wouldn’t have any money.  Beto O’Rourke, trying desperately to get votes, dropped an expletive-laced response on CNN to a mass shooting near Odessa, Texas, and is now raising funds off the Odessa Texas dead. I understand that in America, everyone has the right to be stupid, but it seems that Beto is abusing the privilege.

O’Rourke dropped an f-bomb when giving details of the Odessa shooting to a crowd in Fairfax Station, Virginia. Details which he readily admitted he didn’t have, though that wasn’t about to stop him from politicizing the shooting.

We don't know how many have been killed. We don't know the motivation. But here's what we do know: This is fucked up. pic.twitter.com/NRvyPfUjiM

The response was so great that Beto decided to drop the line again for his base on CNN while simultaneously mocking people who send ‘thoughts and prayers’ during such a horrific event.

“The rhetoric that we’ve used, the ‘thoughts and prayers’ that you just referred to, it has done nothing to stop the epidemic of gun violence, to protect our kids, our families, our fellow Americans in public places,” said O’Rourke.

Beto O'Rourke on CNN: "100 killed daily in the United States of America, we're averaging 300 mass shootings a year, no other country comes close, so, yes, this is fucked up" pic.twitter.com/sQkQJVMupS

Perhaps even more misguided than the idea that Beto’s followers are going to respond to his edgy use of expletives is the fact that he’s trying to fundraise off of his words, and effectively raise money off the backs of shooting victims.

New in the store…

100% of the proceeds will benefit @MomsDemand and @AMarch4OurLives.

This is fucked up. We can change it. https://t.co/PFRWFCypAl pic.twitter.com/Us1V4mz1cf

Funds raised for the $30 t-shirt are promoted as going to Mom’s Demand Action and March for Our Lives, two organizations that consistently manipulate numbers about ‘gun violence’ for the media.

Robert Francis went on to promote his plan to force Americans to sell their guns to the government should he be elected President.

“I want to be clear: That’s exactly what we’re going to do. Americans who own AR-15s and AK-47s will have to sell their assault weapons. All of them.”

Fortunately, what’s clear is that Beto is merely desperate for attention and has no clear way to an election. But selling the shirts with the “f” word and raising money off the tragic victims of the Odessa shooting proves that vulgar Beto O’Rourke is like school in the summertime – no class.