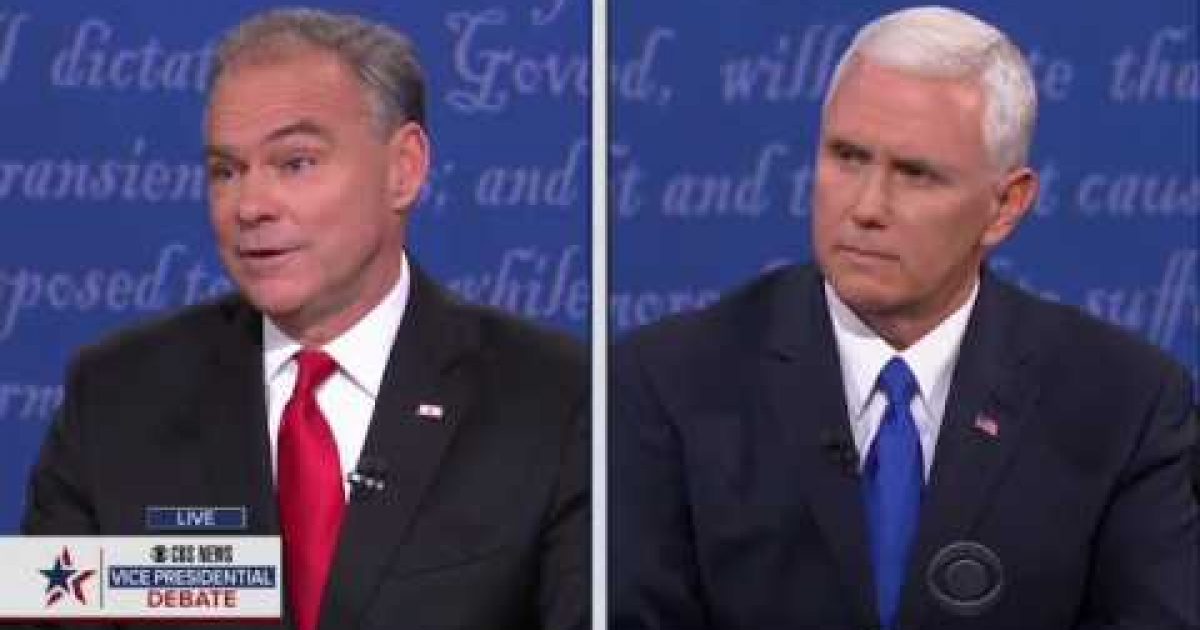 There has never been a Vice Presidential debate that has effected the presidential race. This year’s version of the undercard debate will be no different. Although Republican Mike Pence was the clear winner, it doesn’t really matter because voters cast their ballots based on the presidential candidates not the VPs.

The VP Debate reminded me of a joke my kids used to tell me when they were in elementary school:

In the VP debate Tim Kaine played the role of interrupting cow.  His strategy was not to let Mike Pence finish a sentence. The Democrat was so obnoxious at times viewers must have been begging for someone to run on stage and use some duct tape on the mouth of the Virginia Senator.

Kaine’s strategy hurt him according to reports by Dan Merica of CNN and Abby Phillip of the Washington Post:

Undecided voter in Ohio says, “Kaine came off like a jerk” tonight. Adds that he “reinforced” some of the negatives about Clinton.

On the other hand, Pence, the Indiana governor delivered a smooth performance lobbing attacks at Hillary Clinton while refusing to be baited by Kaine’s interruptions and insults, perhaps making his opponent look even worse when compared to his calm demeanor.

Nothing seemed to bother the unflappable Pence even though the moderator seemed to be helping Kaine (even according to the NY Times):

Elaine Quijano, the moderator, helped Mr. Kaine along, opening one question with a recitation of Mr. Trump’s statements.

“Do you want a you’re hired president in Hillary Clinton or a you’re fired president in Donald Trump?” Kaine asked.“Well, first, let me say I appreciated the ‘You’re hired,’ ‘You’re fired’ thing,” Pence said wryly after chuckling silently. “You used that a lot and I think your running mate used a lot of pre-done lines.”

James Hohmann of the Washington Post commented on this one:

Kaine meant that as a zinger, and it fell flat: “You are Donald Trump’s Apprentice.”

As did Emily Schultheis of CBS news:

Canned debate zingers do not seem to be going over so well. (“You’re hired/fired”) #VPDebate

And my friend Kerry Picket of the Daily Caller:

After another Kaine attack Pence answered with,” Did you work on that one a long time? Because that had a lot of really creative lines in it.”

Perhaps my favorite Pence counter was:

.@mike_pence to @timkaine: “Senator, that was even beneath you and Hillary Clinton, and that’s pretty low.” pic.twitter.com/cPiTPGjvcX

Kaine wasn’t all bad.  In fact, at one point he delivered some surprising but happy news, we can all relax now–terrorism is decreasing. Perhaps he is right. After all so far in 2016 there has been only 1,837 acts of terrorism in the world, resulting in the deaths of over 15 thousand innocents, and injuring another 18 thousand plus.


Maybe Kaine believes that terrorism is decreasing because there have been only six attacks in the US so far this year, and only 49 people died and another 97 were injured. Whether or not those numbers are lower than the first nine months of 2015 the American people certainly don’t feel as if terrorism is decreasing.

Perhaps the biggest loser in the VP debate was moderator Elaine Quijano. It would be wrong to say Ms Quijano lost control of the debate, she never had control. From the very beginning she failed to stop the candidates when they were simply talking over one another. And there were times when the candidates where seemingly in the middle of a good discussion, but she insisted they move onto the next topic.

In the end it was Mike Pence’s night by a large margin, but sadly this VP debate, like all the ones before it will have no effect on the final outcome.