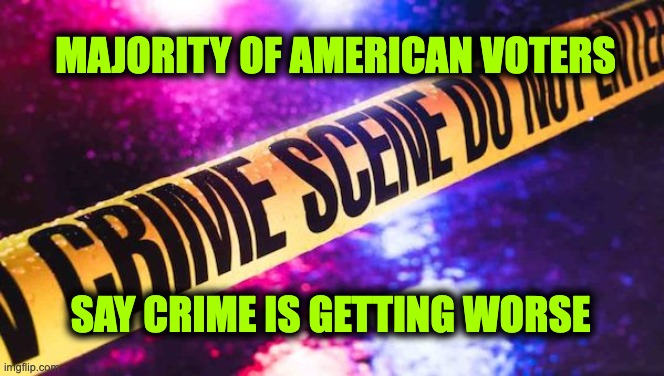 An alarming new Rasmussen survey says an “overwhelming majority of voters” believe the problem of violent crime is getting worse in the U.S., and a plurality trusts Republicans more than Democrats to “deal with the problem.”

Rasmussen conducted the survey of 1,000 likely voters Dec. 13-14 with a margin of sampling error of +/- 3 percentage points and a 95 percent level of confidence.

Since Joe Biden took office, violent crime has gotten worse, and murder numbers are climbing in several major U.S. cities. As reported earlier, many people believe Biden and his party is soft on crime and hard on law-abiding gun owners. Increasing numbers of citizens are buying guns and obtaining carry permits and licenses, and in 20 states, no license is required to legally carry a firearm for personal protection.

A look at the number of murders in Chicago, Baltimore, and other major cities underscores the problem. Homicides are up, and the administration seems unable or unwilling to take action other than propose new gun control laws that penalize honest gun owners but don’t prevent crime.

Much of the problem boils down to political philosophy, as noted by Rasmussen.

That could translate to even more trouble for Democrats heading into the 2022 midterm election cycle. There are already strong signals that the GOP could re-take Congress, thus rendering Biden to the position of lame-duck for his final two years in office. Other factors are at play, including runaway inflation caused by high energy costs.

With crime out of hand, Rasmussen also revealed, “Fifty-five percent (55%) of voters believe America needs to spend more on police, while just 14% favor spending less on police. Another 25% of voters think the current spending on police is about right.

“However,” the survey noted, “only 38% of Democratic voters think America needs to spend more police, compared to 74% of Republicans and 55% of unaffiliated voters.”

It’s those Independent voters Democrats are losing that will swing the 2022 elections, and right now, they do not appear to be a happy constituency.