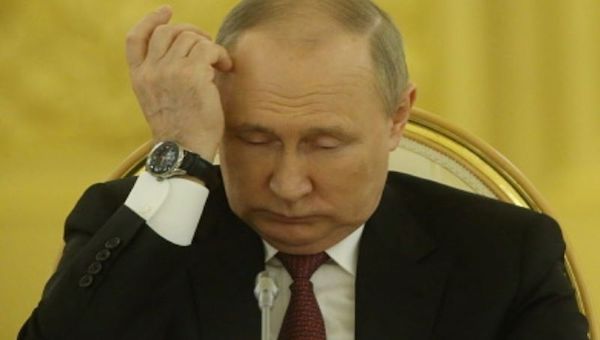 Since it was first reported at the beginning of April the rumors that Russian despot Putin had cancer were growing. Most of th reports originated from Ukrainian Intelligence. Now howver they’ve been confirmed by US intellegence.

As we keep a keen eye on the way in which the Kremlin attempts to justify their invasion of Ukraine, some things have become fairly obvious.

First, of course, is the realization that the Russian army just isn’t as good as we’ve been led to believe.  This has forced their troops to take ever-more-dire actions, with now over 15,000 war crimes having been cataloged by observers.  This, in turn, means that the Kremlin bears an unusually high burden of proving their righteousness.  This “denazification” schtick has already been dismissed by the international community, and the Kremlin really hasn’t tried to replace it.

That leaves us with a startling revelation:  Vladimir Putin really doesn’t care if there is a way out of this thing for him.  He’s not concerned with Russia having a seat at the global table, and he has been utterly flippant about the threats that the rest of the world has ushered in his direction, even sending back a few nuclear prods himself.

And all of this could very well be because he’s dying of cancer and simply doesn’t care how it all turns out.

Vladimir Putin’s health is a subject of intense conversation inside the Biden administration after the intelligence community produced its fourth comprehensive assessment at the end of May. The classified U.S. report says Putin seems to have re-emerged after undergoing treatment in April for advanced cancer, three U.S. intelligence leaders who have read the reports tell Newsweek.

The assessments also confirm that there was an assassination attempt on Putin’s life in March, the officials say.

The high-ranking officials, who represent three separate intelligence agencies, are concerned that Putin is increasingly paranoid about his hold on power, a status that makes for a rocky and unpredictable course in Ukraine. But it is one, they say, that also makes the prospects of nuclear war less likely.

Putin’s cancer has been reported before even on this site, but this is one of the first times that the US intelligence community has been so nonchalant about releasing that information.