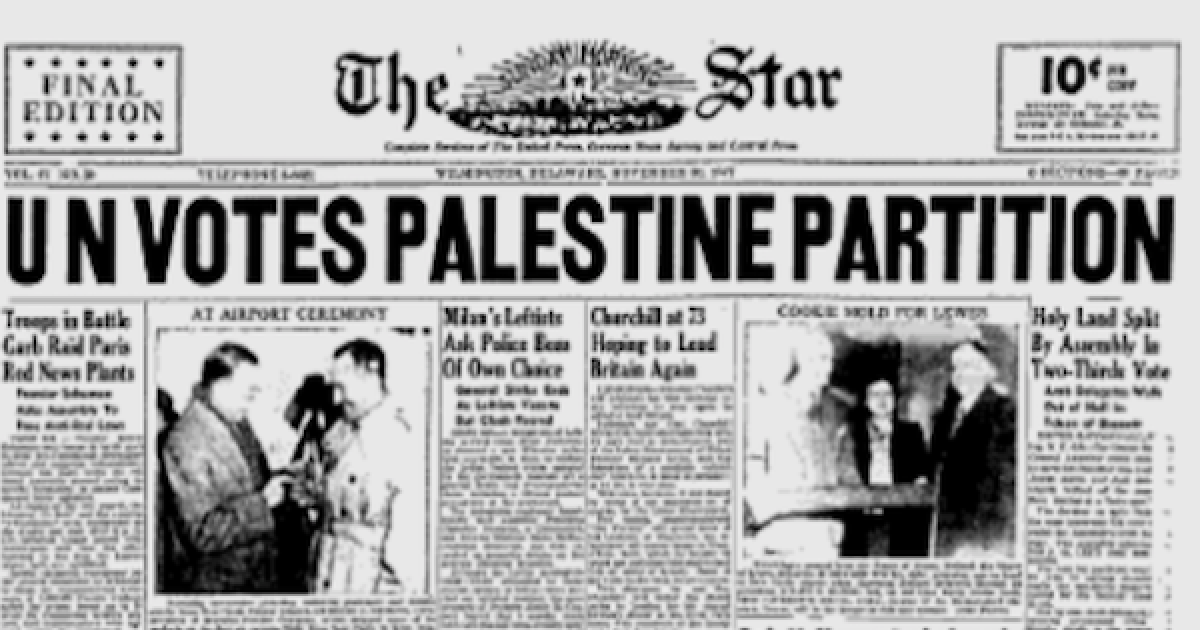 Seventy years ago the United Nations passed Resolution 181  (embedded below) which called for the partition of the British-ruled Palestine into a Jewish state and an Arab state (back then Jews living in the Holy Land were called Palestinians).  It was approved on November 29, 1947, with 33 votes in favor, 13 against, 10 abstentions and one absent (see the end of the post for who voted what). The original partition resolution passed by the UN in November 1947, did not call for the establishment of a state of Israel. UN Resolution 181 called for dividing Palestine into Independent Arab and Jewish, States.

On that very same day, November 29th, 1947 the Arab world declared war on the nascent Jewish State. The CIA at the time predicted the Jews would hold out for maybe two years before they would be overrun. Seventy years later most of the Arab league still refuse to acknowledge that Jewish State’s existence, nor do they allow her citizens to raise their children in peace:

Despite being the treated as the scapegoat for all the world’s problems, Israel has spent much of the past 70 years as the Middle East version of Reagan’s shining city upon the hill, that may be one of the reasons she is hated so much.

In fact, the Jewish State has not only aided the United States, Israel has made contributions to the entire world:

In the last 60 years, the UN’s partition decision has been overwhelmingly vindicated. In a region plagued with religious extremism, tyranny and economic stagnation, Israel stands as a model of democratic pluralism, economic growth and human progress. The Jewish state has contributed to the global community in myriad ways, including an entrepreneurial social sector and a cutting-edge high-tech economy. It has also generously offered its assistance to all countries in need.

Yet Israel’s right to exist is still under attack, often by the same forces that rejected the two-state solution six decades ago. …..In an Orwellian twist contrived by Arab countries, the UN in 1977 declared Nov. 29 a “Day of Solidarity with the Palestinian People.” This distorted the original UN decision beyond recognition – using it to undermine, rather than promote, the cause of peace. Last year’s “Day of Solidarity” UN event, for example, featured a large map of “Palestine” on which Israel did not appear. The official explanation was that it was simply that the map predated Israeli independence – but the implication of a Palestine without Israel was clear.

Diane Steinman wrote the words above nine-years-ago on the 60th anniversary of the partition plan. When she said,  “it’s time for UN member states to reclaim the moral high ground and to once again allow the United Nations to become a relevant player in the quest for peace,” she was only partially right.

Unfortunately, Amos Oz’ dad was wrong. Israel and Jews all over the world are bullied and just because we are Jewish. Much of the Democratic Party, most Muslim countries, and the United Nations whose vote gave birth to the Jewish State are doing their best to lead the rest of the world to make Mr. Oz a liar.

For eight years it was  immoral the way President  Obama has taken every opportunity possible to  throw Israel under the bus,  the way he tries to force Israel to agree to Abbas’ terms without making Abbas and his government agree to stop calling for his people to attack Israelis, stop teaching anti-Jewish hate to its children,  stop celebrating terrorists murderers, stop making payments to the families of terrorists (in some cases with American money), or even agree to Israel’s simplest demand, recognize her as a Jewish state.

Thankfully under the leadership of President Trump, the U.S. has regained the high ground against terrorism, he has even helped the Saudi Government join the fight. As far as Israel goes after 70 years she still has no partner to make peace with. Palestinian President Abbas who leads an organization Fatah that is still trying to destroy Israel through terror still refuses to recognize Israel as a Jewish State and still refuses to recognize any of the Jewish holy sites as Jewish or any Christian sites as Christian. Mr. Trump has also changed his predecessors anti-Israel and anti-Semitic policies.

At times Israel and the Jewish people, in general, have been their own worst enemies, accepting “peace partners” and voting for politicians who wish to see them destroyed. Ze’ev Jabotinsky was correct when he wrote in “The Iron Wall:”

Here are a few things about Israel that the UN, the EU, Arab League or even the United States doesn’t understand.  Jews were first there in the time of Abraham, over 4,000 years ago. He even purchased land there in Hebron, to bury his beloved wife Sarah. Abraham’s grandson Jacob (Israel) purchased land at Shechem.  Though the numbers have varied Jews have lived in the Holy Land since Joshua crossed the Jordan River 3,500 years ago (by the way the Jordan River is more like a creek). The top of the Temple Mount was purchased from Araunah the Jebusite, by King David for the precise purpose of building Jewish Temples about 3,000 years ago.

From the year 70 CE when the Roman’s conquered Jerusalem through 1948 there was never a local government in the holy land. And never an Arab Palestinian state.   After the Bar Kochba revolt in 135 CE, the Romans punished the Judeans (Jews) for revolting the second time in sixty years. They changed the name of their country from Judea to Syria Palaestina (after the ancient enemy of the Jews, the Philistines who were destroyed a thousand years earlier). They made most of the Jews leave the land. But there was never a time where there wasn’t a sizable population of Jews in the holy land. After the fall of the Roman Empire, the holy land was ruled by the Byzantine Empire, the Ottoman Empire, and finally after World War One the British mandate. The first self-government in the areal was 1948 when the Jewish Palestinians declared a state per the UN Partition Plan.

Despite the partition vote, the UN didn’t give the Jews the right to live in the holy land, neither did any country or the land purchases by biblical heroes. The landlord was never the Arabs, and there was never a state of Palestine. Jews have lived in the Holy Land continuously for the past 3,500 years because of an unbreakable contract with the real landlord, God.  We may have been punished at times with exile but God always promised our return.  The UN may have voted for partition, but they were simply acting as the agent of God, and if they didn’t pass that resolution, he would have found another way. As Israel’s first prime minister David Ben Gurion once told CBS News

About 2,600 years ago the prophet Jeremiah was sitting in prison as the Armies of Nebuchadnezzar were about to invade the Kingdom of Judea.  His cousin Hanamel visited him and asked the prophet to buy his land in the field in his hometown of Anathoth. Needless to say, property values were not great since Jerusalem was being besieged by what was then the most powerful army in the world. It didn’t seem as if it would be a good investment. But God told Jeremiah to buy the land, not because the prophet would ever get to enjoy it, but as a symbol, that one day the Jews would return to the land.

Somewhere buried under the ground in the biblical city of Anathoth the bill of sale is buried, as an everlasting symbol to the Jewish people’s eternal covenant with God, a covenant that was recognized by the UN 70 years ago via General Assembly Resolution 181.

Below is UN Resolution 181

GA181 by Jeff Dunetz on Scribd