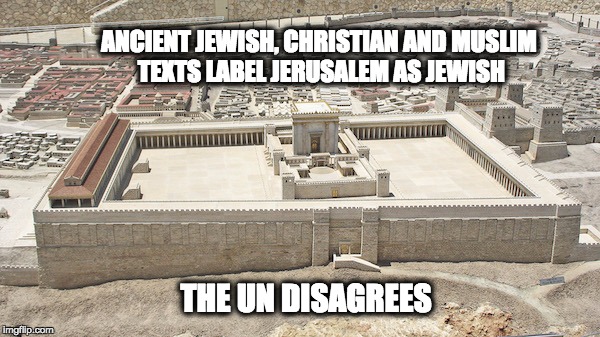 On Tuesday, UNESCO (United Nations Educational, Scientific and Cultural Organization) passed a Palestinian-initiated resolution that accused Israel of actions that have “altered, or purport to alter the character and status of the Holy City” (or as the Arab States call it Judiacized as if the city never had a Jewish identity and there was never Holy Temples atop the Temple mount). It also declared that the city is “occupied” and Israel’s rule over the Holiest place in all of Israel is “null and void.”

“Once again, the United States rejects the adoption of these anti-Israel resolutions at Unesco,” a spokesperson from the US mission to the UN told the Times of Israel.

“Like other parts of the UN system, Unesco is too often used as a vehicle by member states inclined to deride and delegitimise the state of Israel.”

This  UNESCO vote echoes the propaganda of Palestinian Chairman Abbas, and Muslims across the Middle East. The propaganda ignores that the ancient Greeks, Romans, Christians, and even the ancient Muslims, reported Jerusalem and the Temple Mount were the property of the Jewish people.

There was never a Muslim nation of Palestine. After the Bar Kochba revolt in 135 CE, the Romans punished the Judeans (Jews) for revolting for the second time in sixty years by changing the name of their country from Judea to Syria Palaestina (after the ancient enemy of the Jews, the Philistines who were destroyed a thousand years earlier). At the same time, they changed the name of the holy city from Jerusalem to Aelia Capitolina (literally Capitoline Hill of the House of Aelius).

For the ancient Muslim, Greek and Roman pagan authors, Jerusalem was a Jewish city. Their text indicates the unanimous agreement that Jerusalem was Jewish by virtue of the fact that its inhabitants were Jews, it was founded by Jews, and the Temple located in Jerusalem, was the center of the Jewish religion.

These ancient texts, disprove recent attempts by Muslims and others to deny the historic connection of the Jewish people to Jerusalem and the location of the Temple in Jerusalem through fabrications and lies. Below are just some of the examples from Greek and Roman times originally published in a November 2008 Report issued by the JCPA:

The Palestinians point to the fact that there is little archeological evidence that either Temple existed, which ignores the very convenient fact that there is no digging allowed on the Temple Mount in respect of its holiness to the Muslims. But when the Muslims dug up part of the Temple Mount to add to their Mosque, they dumped the tons of dirt with artifacts outside the holy city. Before Thursday’s UNESCO vote Israel prepared a brochure about some of the Temple Mount archaeological finds (which is embedded at the end of this post).

Archeologists have been sifting through the dirt for years (the project’s called the Temple Mount Sifting Project) , and have found artifacts from the Holy Temples. For example in 2005 an archaeologist found what is now known as the Gaalyahu Seal which in Hebrew says belonging to Gaalyahu son of Imer.  The house of Imer was a well-known priestly family at the end of the First Temple period, roughly from around the 7th – 6th Centuries BCE.

UNESCO is also ignoring references to the Jewish Temple in texts the Muslims consider sacred.

And let’s not forget that the Jewish Temple is mentioned in the Christian Gospels which pre-date Islam. For example, in Mark 12:40 and Luke 20:47 Jesus accused the Temple authorities of thieving and this time names poor widows as their victims, going on to provide evidence of this in Mark 12:42 and Luke 21:2. Dove sellers were selling doves that were sacrificed by the poor who could not afford grander sacrifices and specifically by women. According to Mark 11:16, Jesus then put an embargo on people carrying any merchandise through the Temple—a sanction that would have disrupted all commerce. In in the Gospel of John 2:15-16 Jesus refers to the Jerusalem Temple as “my Father’s house”, thus, making a claim to being the Son of God.

What does this all mean?  Ancient text, Muslim text, and Christian text all agree with the Jewish text that there was a holy temple on top Mount Moriah in Jerusalem.  So it’s well past time for the American and other world Governments to stop denying Muslim, Christian, and Jewish history, press the BS button on UNESCO and point out the truth.

No amount of lies, not from UNESCO, not from the Palestinians, not from any UN committee or any world leader–no one except the Lord God himself, can take the Temple Mount away from the Jewish people.