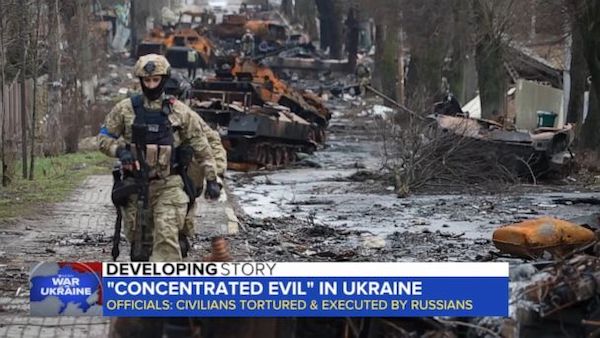 Congress recently passed a bipartisan bill to assist Ukraine’s perseverance in its life-and-death war against Russian aggressors. The new legislation mirrors the “Lend-Lease” program that helped the British and Soviets deter Nazi evil around the time President Joe Biden was born.

The humanitarian aid and arms sailed through the U.S. House with only 10 unserious Republicans opposing.

While Rep. Tom Massie, a libertarian who seems averse to liberty, dislikes any involvement in any foreign conflicts, zany Reps. Matt Gaetz and Marjorie Taylor Greene voted no, mainly for social media attention and future cable news appearances. Of course, these grandstanding congressmen are on the proverbial wrong side of history.

Populists, left and right, crusade against “elites” supporting Ukraine, but it’s the preponderance of everyday Americans who do. Only perhaps the 1991 Gulf War or initial Afghanistan invasion two decades ago found such unanimous support as stopping Russia’s ongoing ignominious efforts. And in this case, no U.S. troops are in harm’s way.

“Is it really American First if China and Russia are shaping the world in their own image?” Rep. Dan Crenshaw asked last week on his podcast, then added, “Chaos spreads and undermines our ability to have a stable and prosperous life….You don’t get the prosperity and freedom you currently enjoy in a world run by China.”

A majority of Americans, in fact, want Biden to be tougher with sanctions on our second most prominent adversary, and three in five want to send more weapons to Ukraine. A few weeks ago, the Washington Post found that just one in seven believe the U.S. is doing “too much” to help Ukraine. Nations that should be most fearful of Moscow plan to join NATO.

What do they need and how can we help get it to them? https://t.co/NWuZkjoUp9

Pew discovered more Americans than ever believe that Washington is finally responding to Russia’s invasion of Ukraine with proper urgency. And the number of Republican voters who approve of a Democrat president’s response has increased. If only the Democrats of 2002-2008 could have been sensible toward then-President George W. Bush, a far more honest and intelligent man than Biden.

Isolationist Republicans of the era disliked the idea. As famed Ohio Sen. Robert Taft said, “Lending war equipment is a good deal like lending chewing gum. You don’t want it back.”

This false choice is heard often on Newsmax or Twitter, even from intelligent senators. And I am sure hypocritical socialists like Bernie Sanders and Elizabeth Warren, silent for months on the matter, would offer the same non-sequitur if a Republican occupied the White House. No one buys the left’s sudden jingoism.

Support for Ukraine’s independence and securing the U.S.-Mexico border are not mutually exclusive. The world’s superpower can do all of the above, and Vance, like Putin apologists Tulsi Gabbard and Mollie Hemingway, is too intellectually lazy to explain why it cannot.

To the bewilderment of a shrinking fringe, Americans across the political spectrum are invested in Ukraine’s intrepid fight against Russia, even as the crisis fades from the headlines.

What political advantage do these fringe detractors — with positions wildly out of step with the country — seek in their pursuit of faux rapprochement and unrelenting apathy toward the atrocities we’ve seen the last three months?