Ukraine Has Evidence Their Govt. Colluded With Clinton Campaign 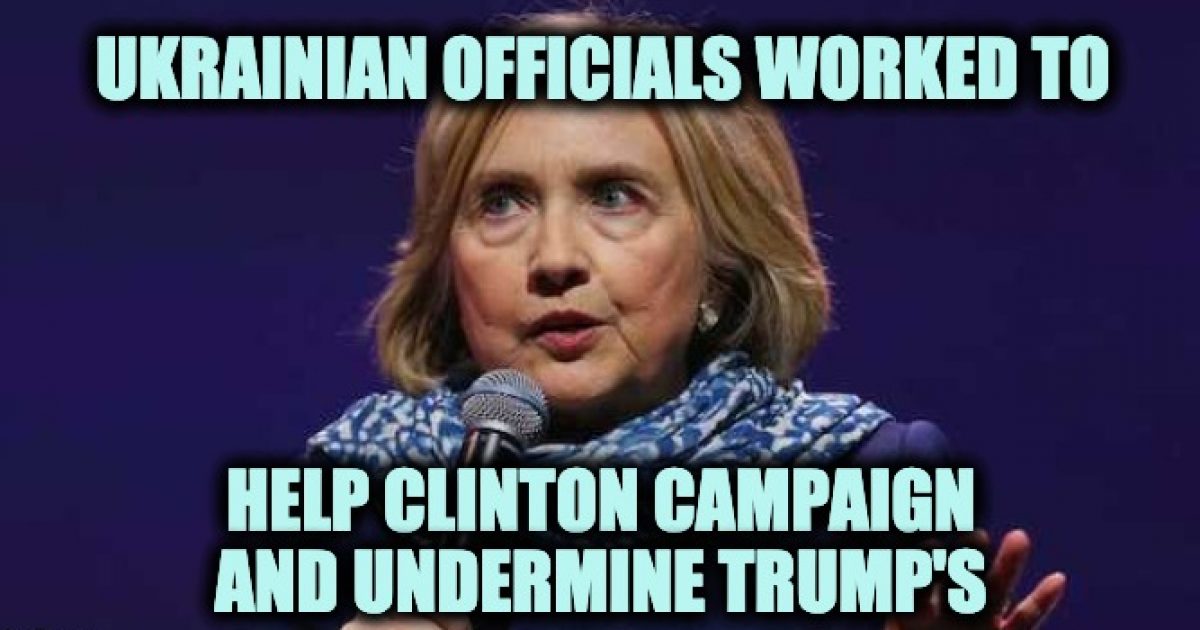 While the Democrats and the lapdog media has been spending their time making up Trump Administration scandals, they’ve been ignoring the real political scandals coming out of Ukraine. Along with the Hunter/Joe Biden scandal that’s dominating this news cycle, the MSM and the Democrats are ignoring the Hillary Clinton campaign’s collusion with the government of Ukraine to destroy Trump’s candidacy which ended up costing then-campaign manager Paul Manafort his job.

Remember the “scandal” about Paul Manafort’s ties to Ukraine that got him fired from Team Trump? Guess how that got to the Press?

The Ukrainian efforts had an impact in the race, helping to force Manafort’s resignation and advancing the narrative that Trump’s campaign was deeply connected to Ukraine’s foe to the east, Russia. But they were far less concerted or centrally directed than Russia’s alleged hacking and dissemination of Democratic emails.

The Politico report identified  Ukrainian-American political operative Alexandra Chalupa, who was consulting for the Democratic National Committee as the contact to the Ukrainian officials.  Oksana Shulyar, one of Ukrainian Ambassador to the U.S. Valeriy Chaly’s top aides, was the point person on the foreign agent side.

Over and above the Manafort sabotage, Ukrainian government personnel “tried to help Hillary Clinton and undermine Trump by publicly questioning his fitness for office” and  “disseminated documents implicating a top Trump aide in corruption and suggested they were investigating the matter, only to back away after the election.” The also helped with the traditional Clinton opposition slanders by aiding friends of Hillary research damaging information on Trump and his advisers.

“Andrii Telizhenko, who worked as a political officer in the Ukrainian Embassy under Shulyar, said she instructed him to help Chalupa research connections between Trump, Manafort and Russia, Oksana said that if I had any information, or knew other people who did, then I should contact Chalupa,’ recalled Telizhenko, who is now a political consultant in Kiev. ‘They were coordinating an investigation with the Hillary team on Paul Manafort with Alexandra Chalupa,’ he said.”

John Solomon reported in The Hill:

Yurii Lutsenko, who was Ukraine Prosecutor-General until last August 2019. But in March of 2019 he opened a probe of members of the Ukranian Parliament who aided the 2016 Clinton effort:

The inquiry was prompted by a Ukrainian parliamentarian’s release of a tape recording purporting to quote a top law enforcement official as saying his agency leaked the Manafort financial records to help Clinton’s campaign.

The parliamentarian also secured a court ruling that the leak amounted to “an illegal intrusion into the American election campaign,” Lutsenko told me. Lutsenko said the tape recording is a serious enough allegation to warrant opening a probe, and one of his concerns is that the Ukrainian law enforcement agency involved had frequent contact with the Obama administration’s U.S. Embassy in Kiev at the time.

A video of the Solomon/Lutsenko interview can be seen here.

In the thirty-three, months since Hillary’s collusion with Ukraine was first reported in Politico, no one in the mainstream media picked up the story, and no congressional investigation has been initiated.  Even after John Solomon corroborated the story with additional evidence, the HRC collusion story has been ignored. This proves once again that the liberals do not really believe it when they no one is above the law.

Instead of investigation this real case of collusion, Adam Schiff and the lapdog media will probably claim that President Trump gave a foreign government some of America’s greatest secrets such as the ingredients to Colonel Sanders secret fried chicken recipe Coca-Cola’s long-guarded “secret formula” known as  “Merchandise 7X,” which is locked inside an Atlanta vault,  or maybe even the missing egg salad recipe from the movie “What’s Up Tiger Lilly?