Despite The Claims Of Some, Journalists ARE NOT Exaggerating The Suffering Of Ukrainians To Provoke An "Emotional Response" From The American Public. 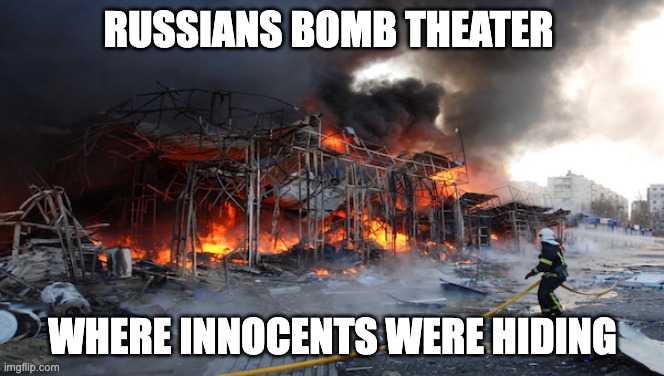 A prominent television talk show host has claimed that journalists exaggerate the suffering of Ukrainians to provoke an “emotional response” from the American public. Sadly, we’ve heard those kinds of conspiracy theories before—including during the Holocaust.

The latest controversy began when Greg Gutfeld, one of Fox’s highest-rated talk-show hosts, asserted on March 8 that stories showing the suffering of Ukrainian civilians “have sped up and are accumulating to create a narrative — and they only go in one direction…an image is taken and then played over and over and over again to create some kind of emotional response out of you because that makes a profit for news companies.”

Gutfeld then went a step further and suggested that the news media’s motive for this alleged conspiracy is not merely profit-seeking but also to unfairly paint Russia as a bully. “The humanitarian crisis could have been prevented” if the media were not presenting the conflict as “a David and Goliath narrative,” which could “lead to more suffering,” he said.

Gutfeld made his comments during a segment of the Fox daily panel discussion show “The Five,” of which he is co-host. He also hosts “Gutfeld!,” the highest-rated late-night television talk show. Ironically, Gutfeld’s mother-in-law is one of the 1.3-million Ukrainians who have fled to neighboring Poland.

Moments after Gutfeld made his remark, Fox News war correspondent Benjamin Hall, reporting from Kyiv, refuted Gutfeld’s conspiracy theory. Hall said, “Speaking as someone on the ground, I want to say that this is not the media trying to drum up some emotional response… [Ukrainian cities] are being absolutely flattened. It is an absolute catastrophe, and the people caught in the middle are the ones who are really suffering.”

Gutfeld responded by accusing Hall of launching a “cheap attack” on him. But it was neither cheap nor an attack—it was a simple statement of fact.

During the Nazi era, too, those who raised the alarm about Hitler’s atrocities were sometimes accused of exaggerating. Two months after the Nazis rose to power, and despite ample evidence of Hitler’s abuses of Jews, Secretary of State Cordell Hull claimed that anti-Jewish violence in Germany had “virtually terminated.” That assertion persuaded a prominent Catholic leader to cancel his plan to speak at a mass Jewish protest rally in New York City.

Later that year, the American ambassador in Berlin, William Dodd, told a prominent American Jewish leader, Rabbi Stephen S. Wise, “things are improving” for Germany’s Jews. Wise told colleagues he was “shocked and perplexed by that because just about that very time…things were almost at their worst.” Rabbi Wise offered to travel to Berlin to speak with the ambassador about the situation. Dodd did not respond.

It wasn’t only the secretary of state and the U.S. ambassador in Germany who claimed that Jewish complaints were overblown. In October 1936, President Franklin D. Roosevelt dismissed reports of anti-Jewish atrocities in Germany because two American tourists who had visited Berlin told him “that the synagogues are crowded and apparently there is nothing very wrong in the situation [of Germany’s Jews] at present.” When refugee advocate James G. McDonald complained to FDR in 1940 about the suffering of European Jews who were trying to escape from the Nazis, the president dismissed it as “sob stuff.”

Officials of the State Department and the British Foreign Office shared that perspective. In 1940, a British official informed his colleagues that “Jews are inclined to magnify their persecutions.” He recalled the “exaggerated stories of Jewish pogroms” in eastern Europe after World War I, which, he alleged, “when fully examined, were found to have little substance.” (In fact, an estimated 100,000 Jews were slaughtered in those pogroms.)

Even after the ongoing mass murder of the Jews in Europe was confirmed in 1942, many Allied officials continued to see the reports as part of a sinister conspiracy. Undersecretary of State Sumner Welles claimed in 1943 that the Jewish calls for rescue were actually sponsored by “the German propaganda machine,” which was “using the misery” of the refugees to “create confusion and doubt within the United Nations [as the Allies were then known].”

In July 1943, a Foreign Office official said Jews were trying to “stoke us up” to get the Allies to “waste a disproportionate amount of…time in dealing with wailing Jews.” One senior State Department official in 1943 derided Jewish rescue advocates as “emotionalists” (a term similar to the language Greg Gutfeld recently used). As late as 1945, a British official wrote that “one notable tendency in Jewish reports on this problem is to exaggerate the numbers of deportations and deaths.”

The war in Ukraine is not comparable to the Holocaust. Russia’s unprovoked military aggression does not meet the definition criteria of genocide. But atrocities do not have to reach the level of genocide for the international community to feel outrage and compassion for the victims. The images we are seeing are not part of some conspiracy to manufacture “an emotional response,” they reflect a tiny fraction of what Ukrainians are really suffering, every day, at the hands of Vladimir Putin’s brutal military forces.