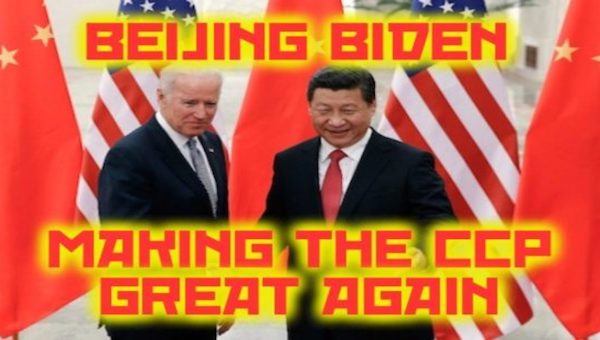 The “Big Guy” is helping out his buddy Xi by removing Trump-imposed tariffs on billions of dollars worth of products made in China. U.S. tariffs on Chinese goods

In a knee-jerk reaction to eliminate anything attached to his predecessor, the Biden-Harris administration has ditched tariffs on over 350 products made in China — everything from breast pumps to X-ray tables and even some food products.

For decades, the U.S. pursued free trade at all costs. The cost was pretty high, with approximately 3.7 million jobs lost between 2001 and 2018 alone and cheap and often poorly made products flooded the U.S. market.

The Obama-Biden plan was to be soft on China, and boy did the CCP use that to their advantage.

In an attempt to course-correct, President Trump had imposed Section 301 tariffs in 2018 on over $60 billion worth of Chinese goods.

While imposing tariffs is somewhat controversial since they can hit the consumer in the wallet, the dual goals of the Trump-imposed tariffs were to (a) give a boost to U.S. manufacturing; and (b) kickstart negotiations on better trade deals.

There was also the whole Uyghur slave labor and human rights abuses of other minorities, intellectual property theft, and heavy government subsidies for businesses.

Well, the consensus free trade view is back, baby!

A group of 140 House Republicans and Democrats have been lobbying to cut the U.S. tariffs on the “Made In China” products, and the administration has given them what they’ve asked for.

Biden’s U.S. Trade Representative Katherine Tai announced late last week that after an extensive review of nearly 550 China-made products subject to Section 301 tariffs under Trump, 352 will be removed from the list.

Zach Mottl, chairman of the Coalition for a Prosperous America (CPA), didn’t conceal his disappointment in the decision.

“Once again, multinational importers and their army of Washington lobbyists have protected their ability to import cheap Chinese goods over sourcing from American manufacturers,” said Mottl.

We are disappointed that the Biden administration granted exclusions to the 301 tariffs on many Chinese products that have alternatives that are made or could be made right here in America, or are made outside of China. [Emphasis added]

As China supports and enables Russia’s aggression against Ukraine, we should be decoupling rather than providing their companies revenue from U.S. consumers. We will continue to fight against those in Congress who want to use taxpayer dollars to refund importers that profit off of cheap Chinese goods, as well as efforts to weaken the 301 tariffs despite China’s continued IP theft, rampant government subsidization, use of forced labor, and violation of the Phase One trade deal. [Emphasis added]
Source: Breitbart News

Nah, that’s probably not it.

It’s more likely the Democrat hatred of all things American.

This decision to drop the tariffs on China now that they’re cozying up to Russia seems like awful timing.

While Biden said that there was going to be a “new world order” when he was in Europe, he might not be wrong about that — it just might not be the new Green Utopia that Western democracies influenced by the World Economic Forum imagine it will be.

The China-Russia Axis has arrived.

China has muscled in on global influence for the past several years. The Belt and Road initiative has exerted tremendous pressure on “developing economies” in places like the Caribbean and Africa.

As Western nations continue to isolate and impose sanctions on Russia over the invasion of Ukraine — that just pushes them closer toward China. This could mean a new big player in the global influence game. Since 2009, the countries of Brazil, Russia, India, China, and South Africa (BRICS) have been working together for “mutual goals” both regionally and internationally. These 5 countries are believed to be the future dominant suppliers of manufactured goods, services, and raw materials by 2050.

While the West continues to shoot itself in the foot in a desperate attempt to make the angry Swedish girl that skipped school smile, other countries that realize we can’t go back to the Bronze Age recognize that the world still runs on things that are made with raw materials. You need fossil fuel to make those things.

Now that China and Russia have joined forces, Clueless Joe is removing tariffs on America’s most significant competitor after they gifted the world with the Wuhan Virus that has kicked pretty much every economy’s ass for the past two years so they can continue to prop up Putin’s invasion of Ukraine.

We Know for Sure: The Media, the Democrats, and Joe Biden LIED About EVERYTHING Concerning Hunter
The Lid