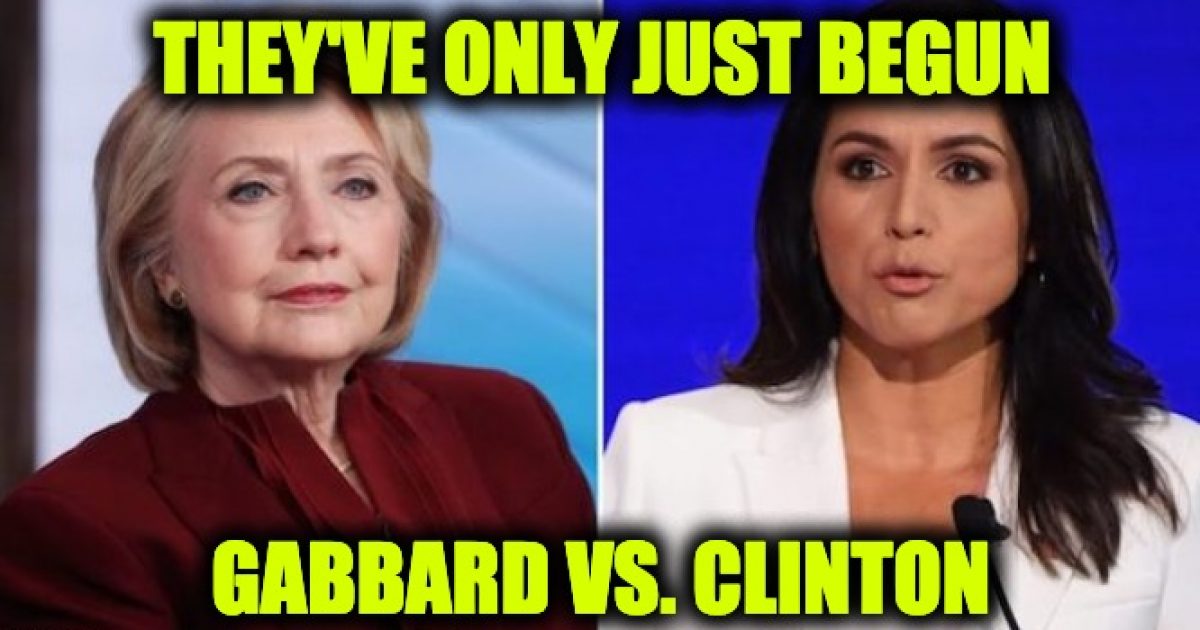 This is a war that I want both sides to lose. Rep. Tulsi Gabbard (D-HI), the former vice-chair of the DNC has responded to Hillary Clinton’s insults by throwing down her gauntlet declaring war.

“People warned me in 2016 that my endorsement of Bernie Sanders would be the end of my ‘political career.’ They said, ‘Clinton will never forget,’ that ‘she and her rich and powerful friends, her allies in politics and the media, will make sure that you are destroyed.’”

It started with Hillary Clinton accusing Gabbard of being a Russian asset. Although HRC didn’t mention her by name, Clinton spokesman Nick Merrill was asked whether crooked Hillary was referring to Tulsi Gabbard,  he replied, “if the nesting doll fits.”

Gabbard issued a stinging response to the two-time presidential loser.

… powerful allies in the corporate media and war machine, afraid of the threat I pose.

It’s now clear that this primary is between you and me. Don’t cowardly hide behind your proxies. Join the race directly.

Gabbard is not my political cup of tea, actually, after eight years of Obama, it’s hard to imagine ever voting for a candidate from Hawaii. But Tulsi Gabbard should be respected.  She’s is a decorated combat veteran who fought in the Iraq war. The closest Hillary ever came to being in combat was her false claim that when arriving in Bosnia in 1996 she had to dodge sniper fire. The only thing she had to dodge was the flowers she was given on the tarmac.

Hillary’s charge about Gabbard being a Russian asset was a complete lie just like her Bosnia story.

Rep. Gabbard responded to crooked Hillary with a stinging video that reminded people that in 2016 she resined form vice-chair or the DNC in protest of the way the party worked against the Bernie Sanders campaign. Then she endorsed Bernie.

“People warned me in 2016 that my endorsement of Bernie Sanders would be the end of my quote, unquote ‘political career,’” she said in a Twitter video viewed over 2.1 million times. “They said Clinton will never forget, that she and her rich and powerful friends, her allies in politics and the media will make sure that you are destroyed. Well, there have been countless hit pieces full of smears against me from day one of this campaign. They’ve tried to destroy my reputation and my lifetime or service because I stood up to them.”

Hillary & her gang of rich, powerful elite are going after me to send a msg to YOU: “Shut up, toe the line, or be destroyed.” But we, the people, will NOT be silenced. Join me in taking our Democratic Party back & leading a govt of, by & for the people! https://t.co/TOcAOPrxye pic.twitter.com/TahfE2XOek

Tulsi Gabbard has put her life on the line to defend this country. People can disagree on issues, but it is outrageous for anyone to suggest that Tulsi is a foreign asset.

If you need any more evidence that Gabbard is correct and Hillary is just being an idiot is that Joy Behar agrees with the former secretary of state. “She hasn’t denied it,” Behar said. “She’s just going after Hillary. I just think that she could be a useful idiot the way that Trump is a useful idiot to the Russians.”

Folks the Iowa caucuses is in four months and this war is going to last at least that long, so grab the big popcorn, a case of beer and fasten your seatbelts, this Gabbard-Clinton war is going to be a fun ride.