U.S. Courts Have Ruled That Political “Rhetorical Hyperbole” Is Constitutionally Protected Speech. But We Can Always Hope. 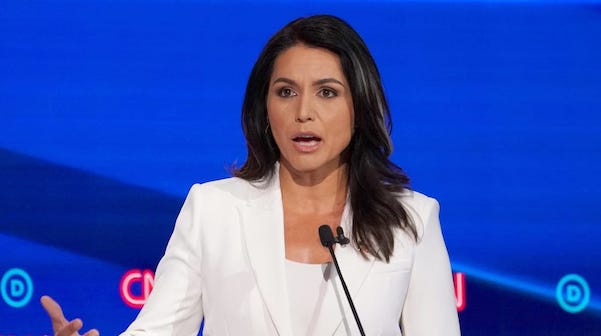 Before she started attacking Bernie Sanders, a two-time presidential loser, the entitled Hillary Clinton went after Tulsi Gabbard (D-HI), characterizing the Democratic presidential hopeful as a Russian asset. Because of that slander, Gabbard has filed a defamation lawsuit against Hillary Clinton seeking $50 million in damages,

In an October podcast by former Obama campaign manager David Plouffe, Clinton said she thought Republicans were “grooming” a Democratic presidential candidate for a third-party bid. She also described the candidate as a favorite of the Russians.

“They’re also going to do third-party. I’m not making any predictions, but I think they’ve got their eye on somebody who’s currently in the Democratic primary and are grooming her to be the third-party candidate,” v

“She’s the favorite of the Russians, they have a bunch of sites and bots and other ways of supporting her so far, and that’s assuming Jill Stein will give it up, which she might not, because she’s also a Russian asset. Yeah, she’s a Russian asset, I mean totally. They know they can’t win without a third-party candidate,”

People assumed she was talking about Gabbard and when Clinton spokesman Nick Merrill was asked whether crooked Hillary was referring to Tulsi Gabbard,  he replied, “if the nesting doll fits.”

Gabbard issued a stinging response to the two-time presidential loser.

… powerful allies in the corporate media and war machine, afraid of the threat I pose.

It’s now clear that this primary is between you and me. Don’t cowardly hide behind your proxies. Join the race directly.

The Russian asset was very personal for Gabbard, who is a decorated war hero who served in a field medical unit of the Hawaii Army National Guard in a combat zone in Iraq from 2004 to 2005 and was deployed to Kuwait from 2008 to 2009.’

The opening of the lawsuit complaint (embedded below) seems designed to zing Hillary:

Plaintiffs Tulsi Gabbard and Tulsi Now, Inc. (collectively, “Tulsi”) bring this lawsuit against Defendant Hillary Rodham Clinton (“Clinton”) for defamation. Tulsi Gabbard is running for President of the United States, a position Clinton has long coveted, but has not been able to attain. In October 2019—whether out of personal animus, political enmity, or fear of real change within a political party Clinton and her allies have long dominated—Clinton lied about her perceived rival Tulsi Gabbard. She did so publicly, unambiguously, and with obvious malicious intent. Tulsi has been harmed by Clinton’s lies—and American democracy has suffered as well. With this action, Tulsi seeks to hold Clinton, and the political elites who enable her, accountable for distorting the truth in the middle of a critical Presidential election.

Later on, it says that Hillary Clinton is a cutthroat politician by any account. A very true statement. It aslo states that the Hillary attacks were a response for the 2016 primary season when she quit her position as vice-chair of the DNC so she could endorse and campaign for Bernie Sanders. She was the most high-profile member of Congress to support Sanders.

Gabbard suspects, and the complaint lays out that the Hillary attacks were revenge for the 2016 primary season when she quit her position as vice-chair of the DNC so she could endorse and campaign for Bernie Sanders. She was the most high-profile member of Congress to support Sanders.

The lawsuit also reveals Tulsi Gabbard asked Hillary to retract her falsehood, but she refused.

Gabbard is not my political cup of tea by a long shot.  Beyond that, after eight years of Obama, it’s hard to imagine ever voting for a candidate from Hawaii. But this lawsuit is going to be interesting to follow. Hillary has been the Teflon Democrat. She has been accused of so much and managed to slither away each time, and she will probably slide away this time.

Lawsuits about political speech rarely end in favor of the plaintiff. Firstly she is a public figure, so Gabbard has to prove that Clinton acted with malice, not just making an opinion.  Additionally, U.S. courts have ruled that political “rhetorical hyperbole” is constitutionally protected speech. But we can always hope.

Embedded below is the legal complaint filed by Gabbard’s attorneys.