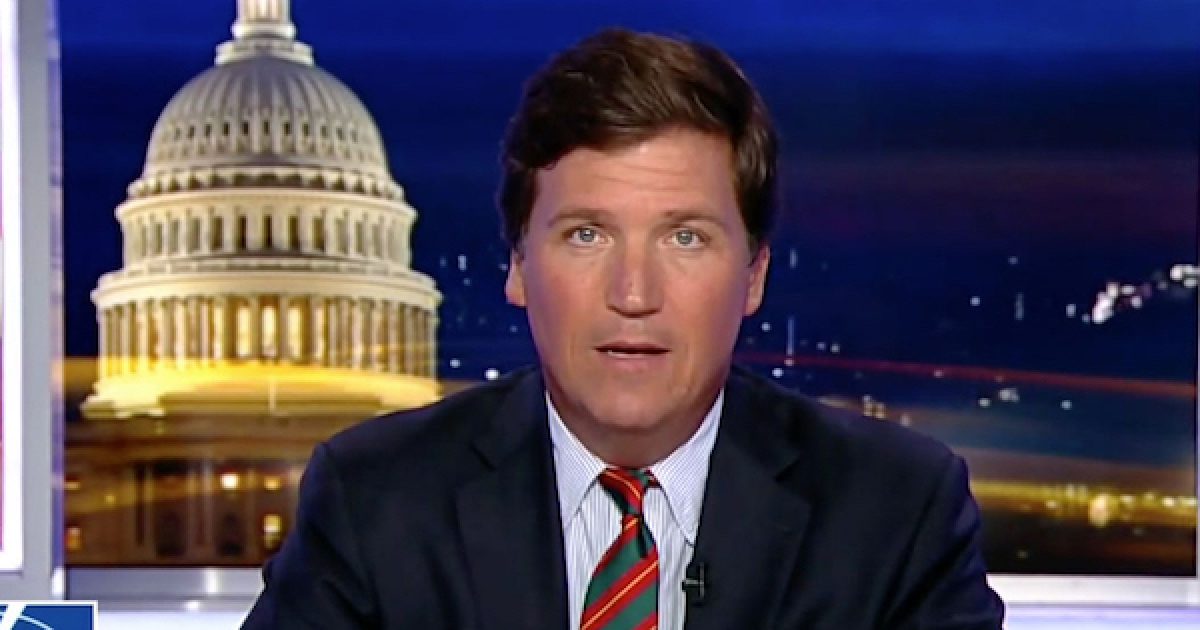 “Tucker Carlson, we will fight. We know where you sleep at night.”DISGUSTING! On Wednesday night, a group of leftwing protestors tied to Antifa gathered outside of Tucker Carlson‘s home, chanting threats a and intimidating Tuckers family. The group “Smash Racism DC”  who was also behind the restaurant ambush of Ted Cruz, shared a video of protestors ringing the doorbell and getting no response and one of them used a megaphone to shame the Fox News host and ordered him to “leave town.”

Tucker Carlson is a co-founder of The Daily Caller and host of  FNC’s “Tucker Carlson Tonight,” was taping at the Fox News studio when Antifa showed up. One of the protesters went all the way up to Carlson’s front door and left a sign with his family’s home address written on it and rang his doorbell The group posted a picture of the sign with the Carlson family’s address on it to Twitter, thus doxing the Carlson family. Video of the group posted to Twitter (later removed) shows one of the mob’s ringleaders leading the crowd in chants of “Racist scumbag, leave town!”

The“Smash Racism DC” creeps posted news of their protest at Carlson’s house on Twitter who pulled their account. But Jack Crowe of National Review recapped the tweets that were taken down:

The first video posted to Twitter, one protester can be seen ringing Carlson’s doorbell before running away.

Every night you spread fear into our homes—fear of the other, fear of us, and fear of them. Each night you tell us we are not safe. Tonight you’re reminded that we have a voice. Tonight, we remind you that you are not safe either.#KnockKnockTuckerpic.twitter.com/QlNVKS4oxN

One tweet posted a few minutes after 7p.m. — less than an hour before the beginning of “Tucker Carson Tonight” — accuses the host of hiding because he didn’t answer his door.

Tucker Carlson has been spewing nonstop hate and lies about he migrant caravan. He also has close ties to white supremacists: https://t.co/jMbQJk3o6D

One of the group’s tweets, which included Carlson’s address, was removed by Twitter soon after it was posted.

And later on, the entire account was suspended which was the correct move but it makes one wonder of Twitter thought they were a conservative group as their practice is to suspend conservatives whether deserved or not.

” was not home at the time. He said his wife, Susie, was home alone and heard the commotion from the kitchen. She called the police and locked herself into a pantry, he said. His brother — who lives close by — arrived about the same time as law enforcement. The host said activists rang his doorbell, broke his oak door and one protester was apparently caught on security video mentioning a pipe bomb.”

Carlson said he was at the Fox News office in Washington working on his opening monologue when neighbors texted him about the commotion outside his home. His wife of 22 years did not contact him because she didn’t want to distract him before he went on air, he said.

The group eventually scattered. It was unclear if there were any arrests. Carlson said the group posted online the home addresses of his brother and his former college roommate, Neil Patel, who co-founded the Daily Caller with Carlson.

Carlson said he is used to being confronted in public and has no interest in playing the role of victim, but he said his wife and his four children should not have to be exposed to the aggression while at home.”

This doxing is just an extension of the divisiveness and hatred the Democratic Party has spewed since Donald Trump won the 2016 election. Make no mistake about it, this disgusting act was incited by the two years of statements by Chuck Schumer, Nasty Pelosi, Maxine Waters, Hillary Clinton, Barack Obama and their zombie-like followers such as Senator Stolen Valor Blumenthal, Rep Adam Schiff-head, and Senator Spartacus.