Will Donald Trump Launch His Own Social Media Platform? Will He Buy One? 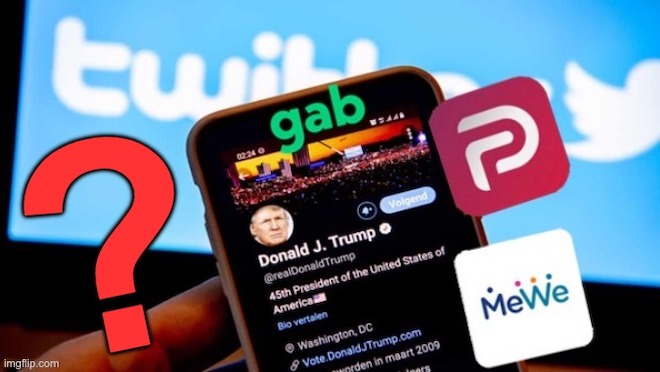 It is only a matter of time. President Trump is going to find a way to directly “talk” to his supporters. His plain talk to his supporters is part of his appeal, and it helps him avoid the roadblocks placed by the mainstream media that refused to accurately cover him. But how will Trump do it? Launch his own TV channel? How about forming his own social media platform, where free speech is openly encouraged? Trump launch own platform

If it comes to fruition, it will be a much needed (and welcomed) addition to the social media sphere and will put a serious dent into the U.S. business segments of Twitter and/or Facebook.

Here’s the deal, via Breitbart:

Jason Miller, a senior adviser to former President Donald Trump, revealed on Saturday that the former president is considering launching his own social media platform in the not-too-distant future.

(…) Miller said, “I would expect that we will see the president reemerge on social media. Whether that’s joining an existing platform or creating his new platform, there are a number of different options and a number of different meetings that they’ve been having on that front. Nothing is imminent on that.”

(…) Miller added, “All options are on the table. A number of things are being discussed. Stay tuned there because you know he’s going to be back on social media. We’re just kind of figuring out which avenue makes the most sense.”

After he was tossed by Twitter, there was talk that the President was going to move to Parler, whose membership was skyrocketing because it didn’t discriminate against conservatives like Twitter and Facebook.  But if he was going to join, we will never know because within days, the Parler app was blocked by Apple and Google, and Amazon stopped hosting the site on its server. Despite promises that it would be up again soon, Parler remains down and is still looking for a replacement for Amazon.

The President has been talking about creating a new platform for a while even tweeted it out over the @potus account after his own Twitter account was banned. The tweets stayed up for a few minutes before Twitter took it down and locked the @potus until handing over the keys to Biden.

“I long predicted this would happen,” Trump wrote in regards to the ban. “We have been negotiating with various other sites, and will have a big announcement soon, while we also look at the possibilities of building out our own platform in the near future. We will not be SILENCED!”

PC Mag took a screenshot of the tweets before Twitter took it down. 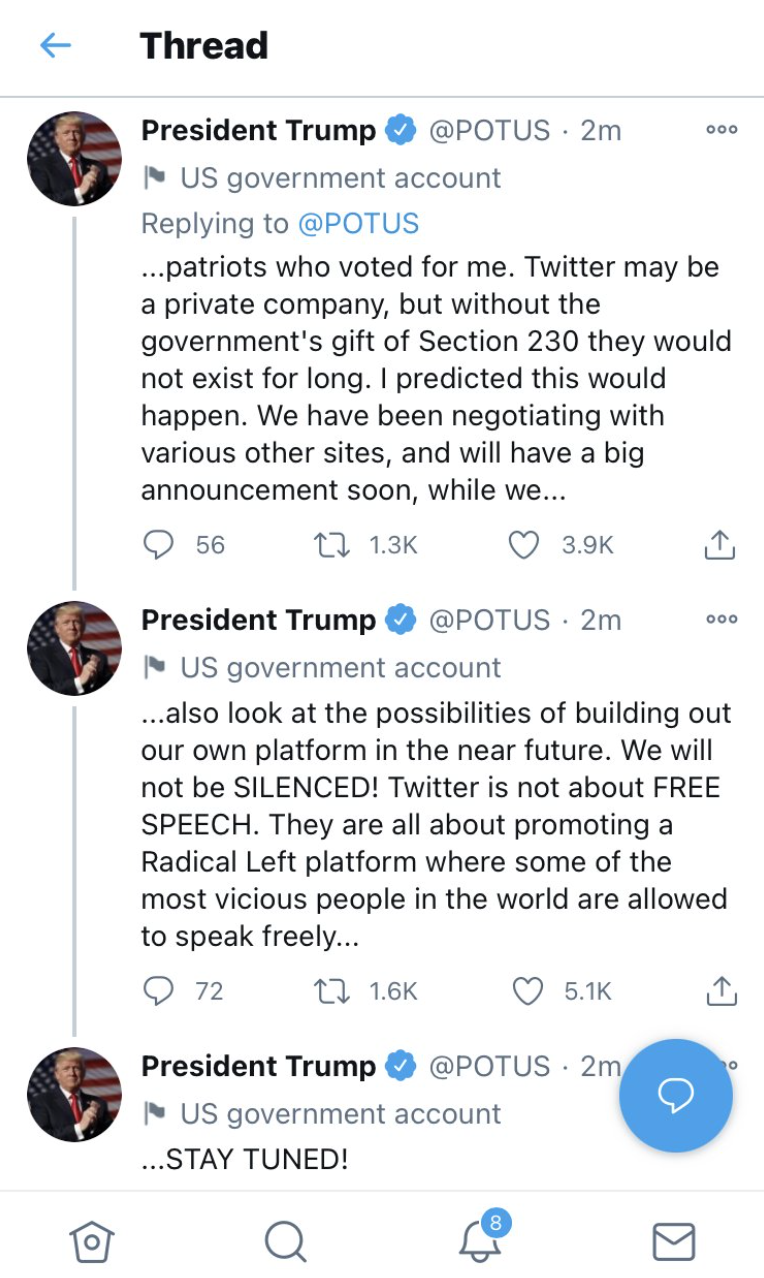 Buzzfeed reported that the  Trump Organization negotiated on behalf of then-president Donald Trump to make Parler his primary social network in exchange for a 40% ownership stake in return for joining. Per the report, members of Trump’s campaign and Parler began to discuss Trump’s potential involvement last summer and were revisited by the Trump Organization after the 2020 election.

(…) Parler offered a 40% stake in the company, according to a December document seen by BuzzFeed News and two people with direct knowledge of the proposed deal. Upon completion of that deal, half of that stake would have been given immediately to the Trump Organization, while the other half would have been doled out in tranches over the 24-month period of the agreement.

Before a deal could be consummated, Trump’s White House counsel’s office put a stop to the negotiations by ruling that such a deal, while Trump was still in office, would violate ethics rules.

There is an account at Gab using the same name that the former President used on Twitter, @realdonaldtrump. According to Gab CEO Andrew Torba, Trump has nothing to do with the account, and the reason Trump isn’t on Gab is that his son-in-law won’t allow him to.

@realdonaldtrump is and always has been a mirror archive of POTUS’ tweets and statements that we’ve run for years. We’ve always been transparent about this and would obviously let people know if the President starts using it. The only reason he’s not using it right now to contact his base is because dopey advisers like Jared Kushner, who lost him the election, are blocking him from using it.

A fake news story was started by random British newspapers that didn’t even bother calling us to fact check or for comment. We will be writing a blog post to expose this fake news shortly.

Despite Mr. Torba’s protestations, it seems a bit hard to believe that a man known for decisiveness and doing the right thing without caring who will complain, will stay off a social media site because his son-in-law tells him not to join.

During his four years in the White House, Donald Trump proved to be a person who, when faced with a roadblock, finds a unique way to get around it. That’s how he was able to negotiate the Abraham Accords.

Whether joining an existing site he’s not using today, helping Parler return, or creating his own, one can assume that Donal Trump will be back communicating with his supporters on social media soon.