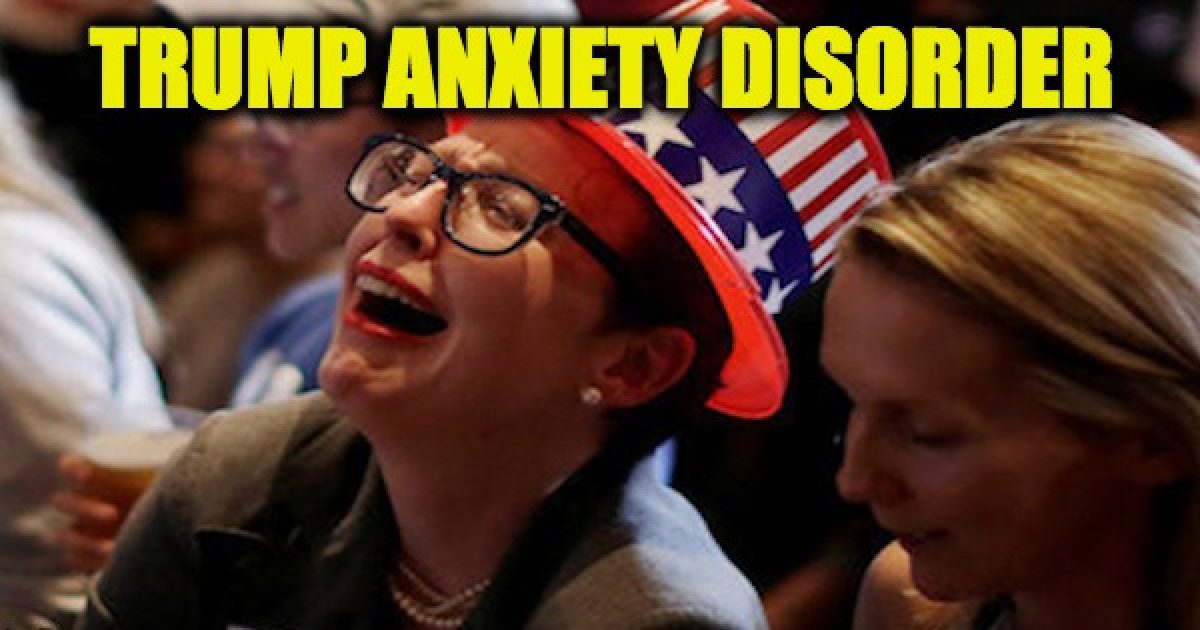 It’s Real! Apparently, the number of cases treated by therapists is rapidly growing for what  they call “Trump Anxiety Disorder.” We call it, “Trump Derangement Syndrome.” The symptoms (according to the shrinks) include gloom, despair and misery, deep dark depression and agony”  The main symptom is a feeling of hopelessness and that the world is going to end.

The hysteria being propagated by the liberal left in the Trump Era has been quite the national embarrassment here in the United States, as we watch droves of delusional democrats raging against the elected president.

We have, of course, been bombarded with stories of something called “Trump Derangement Syndrome” – a condition in which the political and celebrity classes turn to wild and unrepentant anger to disparage their fellow countrymen regarding the President of these United States.  The syndrome has caused behavioral abnormalities that are downright disturbing, including Kathy Griffin’s infamous beheading stunt and some instance of Democrats merely shouting in anger at the sky, as if to blame the cosmos themselves for Donald Trump’s election.

Now, in addition to all of the previous concerns regarding the mental health of our compatriots, doctors are now concerned about an apocalyptic, Donald-centric doom that has been manifesting itself in the radical left.

It started with  a 2017 essay for a book co-edited by psychiatrists from Harvard Medical School and the Yale School of Medicine, clinical psychologist Jennifer Panning of Evanston, Ill., called the condition “Trump Anxiety Disorder,” distinguishing it from a generalized anxiety disorder because “symptoms were specific to the election of Trump and the resultant unpredictable sociopolitical climate.”

(…)A correspondent with the Canadian Broadcasting Corporation (CBC) based in Washington, DC, ferreted out a counselor who is treating people for a “collective anxiety” caused by President Donald Trump “volatility.”

“There is a fear of the world ending,” Elisabeth LaMotte, founder of D.C. Counseling and Psychotherapy Center, told CBC. “It’s very disorienting and constantly unsettling.”

“[LaMotte] refers to it as a “collective anxiety” among patients who feel on edge about how potentially dire the president’s decisions could be.

“What’s been called “Trump Anxiety Disorder” has been on the rise in the months following the election, according to mental-health professionals from across the country who report unusually high levels of politics-related stress in their practices. And it’s maybe not surprising given the relentlessly negative headlines and politically divisive climate.”

Trump supporters also have a new malady, its the pain of “feeling socially or familially isolated” for supporting the president’s agenda, “even if they don’t support his tactics.”

To be fair, and to put this into perspective, there have been plenty of times before in which a massive portion of the population believed that the world was going to end:  Jim Jones and the Heaven’s Gate cult both come to mind…and I don’t recall either of those groups gathering to shout at the sky first.

What this does prove is that truth is as strange as rhetoric.