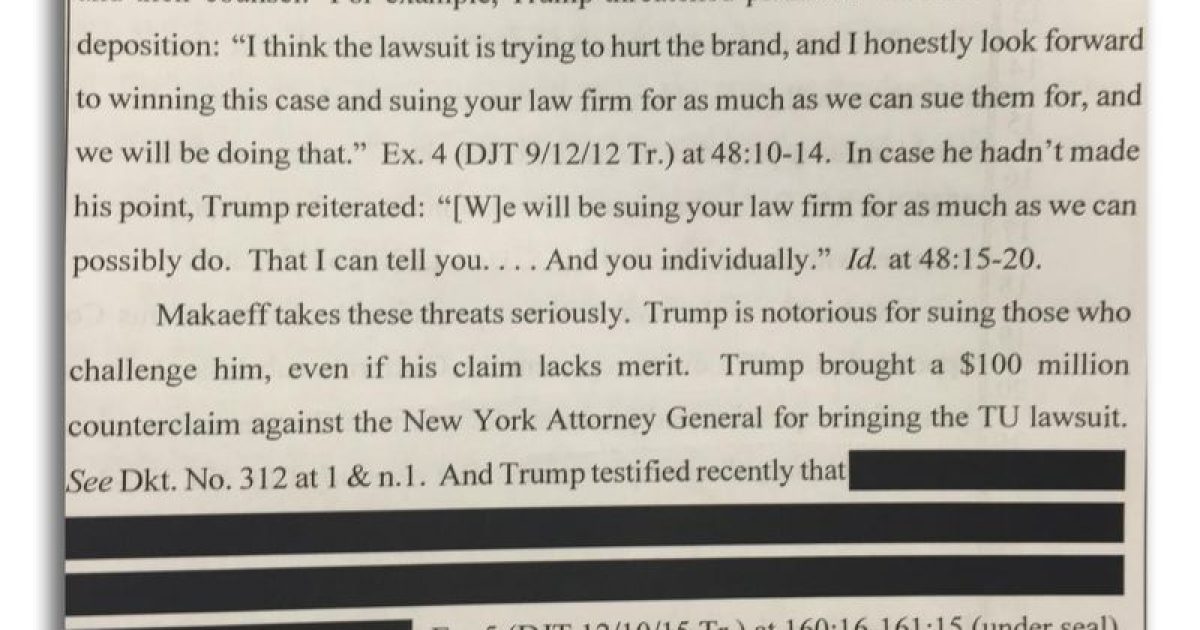 Court papers reveal that Donald Trump is accused of threatening to financially ruin a former student of Trump University who is suing the Billionaire Bloviator for fraud.

In 2005, Trump opened Trump University, a for-profit but non-accredited school where he would bestow his industry expertise upon the masses — aka anyone who forked over up to $60,000. That same year, he licensed his name to an affiliate program called the Trump Institute. Trump University wasn’t a real school, it was a series of real estate workshops in hotel ballrooms around the country.  In 2010, four students sued the “university” for “offering classes that amounted to extended ‘infomercials,’ ‘selling non-accredited products,’ and ‘taking advantage of these troubled economic times to prey on consumer’s fears.’” 2011 saw the enterprise go belly up and in 2013, the New York Attorney General Eric Schneiderman sued Trump and Trump University for allegedly defrauding students.

In three pending lawsuits, including one in which the New York attorney general is seeking $40 million in restitution, former students allege that the enterprise bilked them out of their money with misleading advertisements.

On December 1oth (the same day he announced that he wanted to keep Muslims out of the country) Trump gave a deposition in one of the Trump University law suits and according to the court papers that’s when he supposedly made the threat.

As reported in Yahoo News:

The accusation was made in a motion by the woman — Tarla Makaeff, a California yoga instructor — to withdraw as lead plaintiff, asserting she has been “put through the wringer” by Trump and his lawyers and forced to “suffer daily with the fear that she could be bankrupted by Trump.”

Exactly what Trump said in his December deposition is unclear. The transcript is sealed and the excerpt cited by Makaeff’s lawyers was blacked out in the copy of the filing obtained by Yahoo News. The motion in support of Makaeff’s effort to back out of the suit claims she needs protection “from further retaliation” by the billionaire, who is leading in the polls for the Republican nomination for president.

The underlying class action lawsuit, filed in 2010, charges that Makaeff and thousands of other students were “scammed” into maxing out their credit cards and paying up to $60,000 in fees for seminars in hotel ballrooms and “mentoring” by Trump’s “hand-picked” real estate experts. The lawsuit against the school, which is no longer in business, alleges the seminars turned into little more than an “infomercial” and the Trump mentors she was assigned offered “no practical advice” and “mostly disappeared.” New York Attorney General Eric Schneiderman filed a separate suit in 2013 alleging fraud on the part of the “university,” which was never an accredited institution and awarded no degrees.

(…) According to Makaeff’s suit, she enrolled in Trump University, which the reality show star launched in 2005 with a promotional YouTube video. Advertisements boasted, “I can turn anyone into a successful real estate investor, including you,” and lured students with lines like, “Are YOU my next apprentice?” and “Learn from my hand-picked experts how you can profit from the largest real estate liquidation in history.”

In her court filing this month, Makaeff’s lawyers say she has been “forced to endure a high stakes and very public battle with Trump … just for standing up to him.” The businessman’s “aggressive tactics,” they wrote, include subjecting her to four “grueling” depositions, “taunting” her in the media, threatening to sue her lawyers and countersuing her for defamation. That last case, a so-called SLAPP (strategic lawsuit against public participation) suit, was rejected by a judge who also ordered Trump to pay her $800,000 in legal bills — an order Trump is contesting. The filing says Makaeff’s health and job prospects have suffered and she now wishes to let the other plaintiffs in the case “carry this ball over the goal line.”

If one believes the deposition this is just one more example of how Trump handles everything, by bullying.  And thats just one more reason why he doesn’t have the right mindset to sit in the oval office.