The Republican Party is not a “Thing”– It’s a “People”

Remember those old vocabulary lessons? Nouns were defined as a person, place, or thing. Many of my fellow Republicans have forgotten that the Republican Party not a thing it’s a person (well it’s people). The most forgetful of that fact in my GOP family are the conservative Republicans (like me), who spent much of the past year fighting against the possibility of Donald Trump becoming the nominee. While I didn’t endorse until the NY Primary, I was first for [score]Marco Rubio[/score] and after that I was for [score]Ted Cruz[/score].

As some of you know, I have come to the excruciatingly painful decision that unless something radical happens (like someone resurrecting Ronald Reagan and nominating him), when November rolls around I will be voting for Donald Trump. My vote isn’t a result of party affiliation but the fact that there are only two things worse than President Donald Trump they are President Bernie Sanders, or the likelier President Hillary Clinton. Don’t talk to me about third parties, Gary Johnson, or not voting for President at all, they are all just a way of voting for Hillary but giving ones self emotional cover.

This controversy between Republicans reminds me of my last flight to Israel on El Al. After sleeping for much of the overnight trip to Tel Aviv, a stewardess woke me up and asked if I would like breakfast. I asked her what my choices were and she answered, “Yes or No.” Folks that about sums up your choices in November, it’s Trump or Clinton, or to some it’s Hillary Clinton “Yes or No.”

Political parties are no different. They start with a few people agreeing with one or two issues, perhaps who gets on the school board, or what is being done with the garbage dump around the block, or even how to torture the guy down the block who lets his dog run free to crap on your lawn.  From those hyper local groups parties grow to villages, counties, states, regions and the entire country.

The growth of families into countries is based on the same principles as the growth of the guys in the neighborhood taking a bat to the guy who won’t curb his dog grows into a national party. That is, how to best provide food and protection for one’s family. Everything comes down to that– domestic policy, foreign policy, etc.

Now this is where Donald Trump comes in to the picture. The reason he will be the nominee of the party has nothing to do with “the Thing” called the Republican Party.  Despite how it’s described by pundits and some of the candidates, there is no cabal of GOP leaders who have the final say in selecting the nominee.

On the Democratic side however, party leaders are more powerful, and in the likely event that Clinton is nominated much of the credit should to the DNC.  Here in the GOP there are no back room national power brokers who pick the candidates. Even those wealthy donors who try to skew the results by donating millions to the favorite candidate don’t really select a candidate.  While all that the money helps to get out a message that message has to be the right one. If you believe cash is the sole decider of who gets the nomination allow for me to suggest that you ask “President” Jeb Bush, or “President” Marco Rubio if they agree.

The way candidates are selected in the GOP is one group of people who have bonded together to torture their neighbor convinces a group of people protesting a garbage dump to unite and support the same candidate who they believe will solve both their problems. In classic social studies class-speak they form coalitions. In the end, the people who thought Trump was the best candidate convinced more groups to join with them, than the folks like me and other conservatives did in convincing people to support a candidate in our image.

And as the process whittled down from seventeen to one, not only were we unable to get our candidates to really understand the anger in the country like Trump did, but we were not willing to to push our favorite candidate to drop out and support our second favorite candidate fast enough to make a difference. The one exception to this was Chris Christie whose preferred role in Presidential politics isn’t to get the nomination but to screw things up for the GOP (Chris I was ready to forgive you for 2012 but now you are dead to me).

Ultimately if my fellow conservatives want to take the time to blame someone for the fact that Donald Trump is the Party’s nominee, I would suggest you look into the mirror (btw a mirror is a thing).  Because the reason Trump is the nominee is that you, me, and all of our fellow conservative-types did a really lousy job at convincing people to join or coalition.

And as for Reince Priebus he is Chairman of the GOP, not the dictator. He does not pick the winner. His job really starts once the coalition is built –he feeds it with research, ground game, and TV dollars to turn it in to a winning coalition. That’s it! He does not have a say in picking the candidate.

Now what happens when my conservative compatriots decide to rip up their GOP party card and throw out the secret GOP decoder ring they got free in a specially marked box of “Right Krispies.” Because the vast majority of conservatives in the GOP will stay where they are, those leaving the party become a powerless fish in a very small, powerless ocean, sort of like–well –like Gary Johnson for example.

The conservatives who stay in the party will find it much harder to build a majority conservative coalition of in the Republican Party. It’s not the GOP you will be killing; it is the conservative influence in the GOP and the chance to place conservatives in the federal government.

If my fellow conservatives really want to elect conservatives into national office the only way is to stay in the party and start convincing people that the conservative way is the best way to feed and protect their family.

This is not about Donald Trump, it’s about policy.  Take a look at what is happening on the other side of the aisle.  Unlike the GOP, the ruling class of the party holds the keys to the nomination, but the policy is being determined by the socialists who despite Clinton. The leftists have formed the coalitions necessary to drive the as close as possible to Karl Marx.

Conservatives need stay in the party, build coalitions and to drive policy, especially if Trump elected. We may not agree with him on many policies (and how to speak about people in public) but in the end it will be much easier for us to build coalitions under Republican Congress and a Republican President, than if we had to try outside the party, or even worse negotiating with a (God Forbid!) President Hillary Clinton. 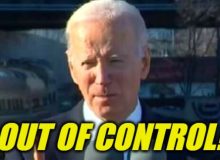