Trump And The Big Lie 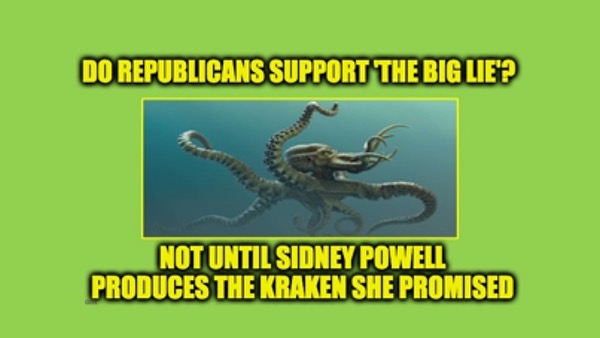 At first, I wondered what a “big lie” had to do with Biden’s weak defense budget. Then I began to wonder if he was implying that Trump said, “the check is in the mail,” and most Republicans believed him. After all, I was once watching Family Feud, and “the check is in the mail,” was the number one answer when people were asked to name the biggest lie. But I couldn’t figure out which check Jimmy was talking about.

Finally, the answer to what @JimRosy was talking about came to me.

Allow me to expand:

First of all, most Republicans I speak to do not believe that Donald Trump will be installed as president in August.

Sidney Powell might believe it true, but how can anyone believe an attorney who never produced the giant octopus known as the Kraken that she promised.  As for Mike Lindell, I love his pillows, but other than that, he seems kind of crazy.  Yesterday I suggested to a friend that Lindell was crazy enough to start claiming that Trump was the real winner of the Israeli prime minister election and should be installed as PM.

As for Trump, IMHO, the MSM is lying about the August claims as much as they lied about almost everything about Trump’s four years in the White House.  Does Trump believe the election was stolen from him—you bet he does. Is there anything he or any other person who believes in the U.S. Constitution can do about it? NO!

So what do the many Republicans I talk to believe?

Before I get to that, you should know that the Democrats never accepted the results of the 2016 Presidental election. Stacey Abrams still goes around saying she was robbed of the 2018 Georgia Governor Election. If you did a poll, too many Democrats would tell you that Al Gore won in 2000, but Florida was stolen, and John Kerry won in 2004, but Ohio was stolen. Maybe that’s why Kerry always walks around with the long face.

Calling Trump’s belief the election was stolen “the big lie” and accusing people of “selling their souls” to Trump is just a continuation of the anti-Trump hatred his supporters faced since he announced in 2015. Most Republicans I speak to believe that there was tons of funky stuff that happened during the election, but it wasn’t enough to change the results.

Many of them (including me) warned of the possibility of voter fraud before the election. In July 2020, I wrote a post that linked to around 1,300 examples of voter fraud. Three years earlier in 2017, I wondered why Democrats fought against Trump’s request to investigate the 2016 election, which he won. There were too many other posts to mention, but you can find them here.

While I supported Trump in both is presidential runs (but not in the 2016 primary) and think he was an excellent president, the mistake of people like Jimmy is believing this is a Donald Trump issue. And to be honest, if Trump was the nominee in 2024 I will vote for him. Many in the GOP wouldn’t vote for him or anyone who is a populist. The Biden/Harris administration is awful. It’s hard to see how any non-socialist would support their re-election.

That’s where the desires for investigations of 2020 come from, find out if anything bogus happened and if there was funky stuff to make sure it doesn’t happen again. The leaders of the Arizona audit that many people of both parties complain about have said that their investigation is not meant to, nor will it change the results. But if people want to call it “the big lie,” prove it. Allow investigations to prove there was nothing funky about the vote.  The Democrats didn’t allow an investigation of 2016 now they are calling people names because they want an investigation of 2020.

I accepted that Joe Biden was president and nothing can change that fact months ago. America survived eight years of the anti-Semitic leftist Barack Obama as president, dealing with four years of Dementia Joe will be easy in comparison. Joe Biden will be president until inauguration day in 2025 (unless the Democrats invoke the 25th amendment), but that is very doubtful.

Maintaining the integrity of American elections is also behind the voter ID laws the democrats fight against so hard. They will make the elections fairer.  Unless of course, the liberals are correct in their belief that minorities are too stupid to get a state ID or bring their own bottle of water.

One of the most sacred rights and responsibilities of American citizenship is voting. We are supposedly guaranteed that every person’s vote is worth as much as every other person’s vote. That guarantee has never been perfect. Blacks weren’t allowed to vote until the 15th amendment in 1870, and women were disenfranchised until 1920’s 19th Amendment, but the tradition of the United States has been to aspire toward honest elections.

The U.S. Constitution begins with “We the People of the United States, in Order to form a more perfect Union.” In other words, this country is not perfect, but we are working to become more perfect. One way is to do everything we can to ensure one person’s vote is equal to every other person’s vote. Implementing election security laws such as the one recently passed in Georgia is one way to ensure that result. Investigating how the past election was run is another—not to change the results, but to make sure that the next election is “more perfect” than the last.