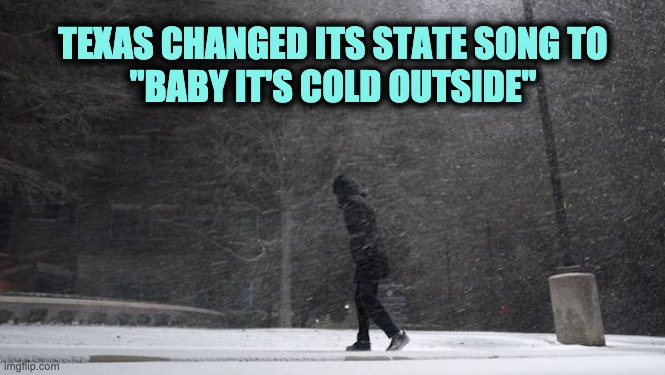 This is the result of reliance on unreliable “green energy.” Let’s hope that Texas has learned its lesson. Texas green energy fail

A massive winter storm has hit several states and has caused havoc in Southern states unaccustomed to ice and snow.

Temperatures in north Texas remained below zero as of Monday morning, with Amarillo reporting a temperature of minus seven degrees, according to WeatherWX.com. Dallas had reached 10 degrees by mid-morning, with Houston at 20 degrees.

Rotating power outages were initiated by the Electric Reliability Council of Texas, or ERCOT, early Monday morning, meaning thousands went without electricity for periods of time as temperatures fell into the teens near Dallas and 20s (about minus 5 degrees Celsius) around Houston.

Boy, this tweet below didn’t age well, did it?

February is expected to be warmer than average across much of the U.S. and that trend may continue into early spring: https://t.co/mnzRm67rGW pic.twitter.com/UNyCLEFwRL

Despite several states bearing the brunt of the storm, it’s Texas that is making the headlines.

It’s unbelievable that the state that produces oil and gas could be suffering from rolling blackouts like their leftwing, “green energy” friendly counterpart on the West coast, eh? It brings a whole new meaning to the “Don’t California My Texas” t-shirt slogan, doesn’t it?

But, if the Very Smart People in Texas don’t want California’s results, they’re going to need to make some changes. Maybe don’t implement the policies of California, for starters. Just a thought.

This is by no means downplaying the situation in Texas. This isn’t just a cold-snap that Northerners are accustomed to, and Southerners can’t handle — this is life and death.

The temperatures in Texas are record-breaking cold, with the wind chill dropping to double-digits below zero. This kind of cold can cause death from exposure. You need heat to survive, and some people are making some awful (and deadly) decisions on how to keep from freezing.

At least eleven deaths have been linked to a dangerous winter storm system that’s breaking records across the country. Some four million homes and business in Texas were without power early Tuesday as the electric system struggled to meet demand, according to poweroutage.us.

Among the dead were a woman and girl who were in an attached garage in Houston where a car was being run because the lack of power meant there was no heat in the home, reports the CBS affiliate there, KHOU-TV. Authorities said they suffered carbon monoxide poisoning. So did a man and boy from the same family, who were hospitalized. There was no word on their condition.

In Fort Worth, two people were in critical condition and one was in serious condition from what was believed to be carbon monoxide poisoning, reports CBS Dallas. A child was also among those overcome but was said to be in good condition.

Also in Texas, a 78-year-old man died after falling on his front lawn and being stuck in the cold for two hours…

…Abilene, Texas tweeted that it “shut off water as a result of power outages from both power sources at all three of (the city’s) water treatment plants.” It wasn’t known when service would be restored.
Source:

The storm hit, and the power went out just when there was an increased demand for electricity to heat homes.

So, What the heck happened to leave millions without power?

The Texas power grid, powered largely by wind and natural gas, is relatively well equipped to handle the state’s hot and humid summers when demand for power soars. But unlike blistering summers, the severe winter weather delivered a crippling blow to power production, cutting supplies as the falling temperatures increased demand.

The Electric Reliability Council of Texas, or ERCOT, which is responsible for scheduling power and ensuring the reliability of the electrical network, declared a statewide power generation shortfall emergency and asked electricity delivery companies to reduce load through controlled outages.

More than 4 million customers were without power in Texas, including 1.4 million in the Houston area, the worst power crisis in the state in a decade. The forced outages are expected to last at least through part of Tuesday, the state grid manager said.

Tucker Carlson discussed the situation in Texas on his show on Monday night.  Former Secretary of Energy and Texas Governor Rick Perry says that the reliance on unreliable “green” energy means that people will die.

Some of these climate zealots don’t give a damn.

There may come a point when green energy is reliable, but we’re just not there yet. Demanding that we abandon all fossil fuels before we have a viable and reliable alternative is just reckless and foolish, and it will cost lives as we see in Texas today. BTW there is no truth to the rumor that Texas will change their official song to “Baby It’s Cold Outside.”