A New Low For The Liberal Media? 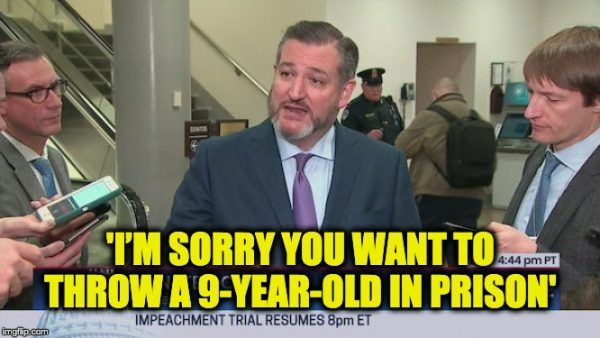 Ted Cruz eviscerated a reporter covering the impeachment trial for playing a “nasty game” after the latter suggested the senator’s kids should be in jail. Ted Cruz’s kids

The reporter clearly thought he was making a witty retort to Cruz’ insistence that Hunter Biden, son of former vice president Joe Biden, may be involved in corruption with a Ukrainian gas company.

The journalist dismissed Hunter’s involvement with the company and his father’s quid pro quo in demanding a prosecutor investigating them be fired under the threat of withholding aid.

“Hunter Biden got a job,” CNN’s said. “His dad was Vice President. If that’s a crime, shouldn’t half of your children be in prison?”

Cue the sad trombone. We’re sure when the reporter wrote it down, this hack thought he was delivering an epic rebuttal to Sen. Cruz. That’s until one realizes that Cruz’s children are 9 and 11-years-old.