Democrat Caught on Video Teaching Illegals How to Vote 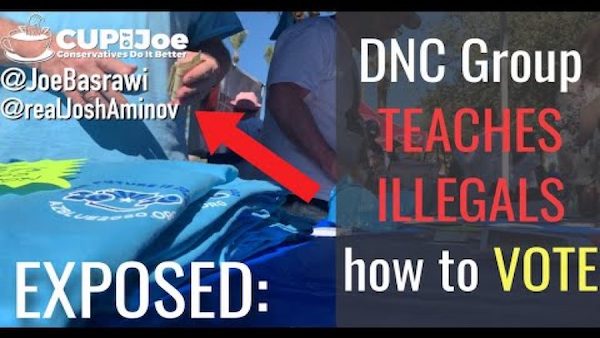 Is this how Democrats plan to swing the election in 2020? teaching illegals to vote

Americans are overwhelmingly for Trump’s reelection.

According to Patriot Productions, “UNDERCOVER HEROES. “One of our hosts, Joe Baswari, and our friend, Josh Aminov, approached a booth from AZ Act Blue 2020 at the Phoenix Women’s March on Sunday, 1/19/20, disguised as illegal immigrants seeking to vote.”

“After asking the organization’s co-founder, Richard Gooding, about how to vote as non-citizens, asking if they ‘support illegals,’ the staffer told an undercover journalist how they could sneak around voter laws and vote as non-citizens in federal elections!”

Watch what happens after the “camera turns off” below.

Is this how liberals will swing the election in their favor in 2020? This video is from the swing state of Arizona, which could decide the next election! Listen to Joe Basrawi’s thoughts about the video and it’s significance to the 2020 election below

The DO-NOTHING-#DEMOCRATS started this threat to our national security! pic.twitter.com/mQCJ3js7GU

You don’t have to be a rocket scientist to figure out why Democrats favor mass immigration and oppose Trump’s wall.

AZ Blue 2020, a Democratic action group, was caught by our undercover journalist @JoeBasrawi SHOWING ‘illegals’ how to vote!

THIS NEEDS TO BE SHARED AT ALL LEVELS OF MEDIA!

If you take out all of the dead and illegal voters, Donald Trump may have won by an absolute landslide in 2016.

In 2020 it looks like it will be a landslide even with the illegals and dead people voting.

Forget all of the fake news polls and watch the attendance at Trump Rallies.

Things can change, of course, but it is my contention that if you only count eligible voters, Trump might even win states that ALWAYS go to Democrats.

Unfortunately, we will have illegals and dead people voting again in 2020.

We will seek to keep exposing them to minimize their effect as much as possible.

You don’t have to be a rocket scientist to figure out why Democrats favor mass immigration and oppose Trump’s wall.