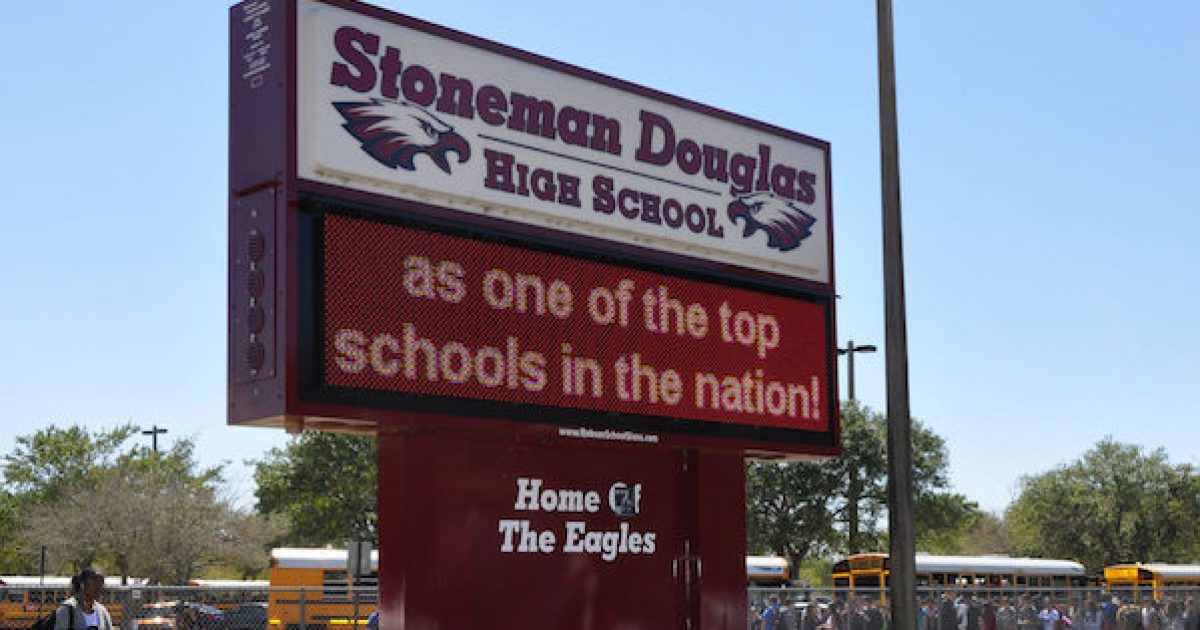 A bombshell draft report from the Marjory Stoneman Douglas Public Safety Commission which has been meeting since April to investigate the Feb. 14 mass shooting at a Florida high school amounts to a reality check for gun control advocates. That’s because one of the recommendations to improve security at schools is to arm teachers. The South Florida Sun Sentinel said a draft report from the panel identifies several failures “by Broward County agencies” which the recommendations would ostensibly correct:

The 407-page report, which is not final, found that deputies didn’t rush into the school to stop the carnage, and school staff committed numerous security breaches, including leaving doors unlocked and not calling a “Code Red” alarm quickly enough.

The panel also voted to include a controversial proposal allowing classroom teachers to carry guns in schools if they go through a selection process that would include background checks and training. Such a change would require the state Legislature’s approval.

Armed teachers, improved security and “better law enforcement” are high on the list, the newspaper said.

There was one stunning dissent, from the father of a student who was killed at Marjory Stoneman Douglas High School on Valentine’s Day. Max Schachter was quoted by the newspaper, saying he had heard from teachers who oppose the idea. He suggested putting “smoke cannons” in school hallways to confuse any school shooter, the newspaper said

Earlier this year, the Broward School Board opposed the idea of armed teachers, the Florida Sun Sentinel reported at the time.

The proposal may not sit well with David Hogg, the student who became the face of a teen gun control movement in the weeks after the shooting, which left 17 students and adults dead. It also is getting some opposition from Congressman Ted Deutch, a Florida Democrat, who contended that “Teachers want to teach, not be armed for combat in their classrooms. Law enforcement cannot push their responsibilities to make our communities safer on to civilians that should be focused on educating their students.”

But what if it saves just one life?

Earlier this year, Hogg appeared on ABC’s This Week with a teacher at the school, Ashley Kurth to press for gun restrictions.

But Polk County Sheriff Grady Judd, who sits on the panel, has a different view, the newspaper reported. In the ideal world, we shouldn’t need anyone on campus with a gun,” he reportedly stated, “but that’s not the world we live in today.”

He advocated having multiple people on campus “to protect the children.”

According to the newspaper, the draft report, “does not recommend new gun control policies.” That amounts to a refute of the activities by the gun prohibition lobbying groups that many rights activists believe co-opted the student movement for their own purposes.

What is wrong with allowing teachers to protect the kids (with specialized training first). You know if such a  policy is enacted liberals will go crazy because to them, guns are not weapons of self-defense. To liberals, guns are big, bad, scary inanimate objects with minds of their own that fire of their own accord. That’s why they want to ban guns. Besides if teachers were armed and prevented shootings it would upset the progressives because school shootings allow them to push their anti-gun agenda.