Taliban Has Six Planes With Some Americans Passengers ‘Hostage’ At Airport 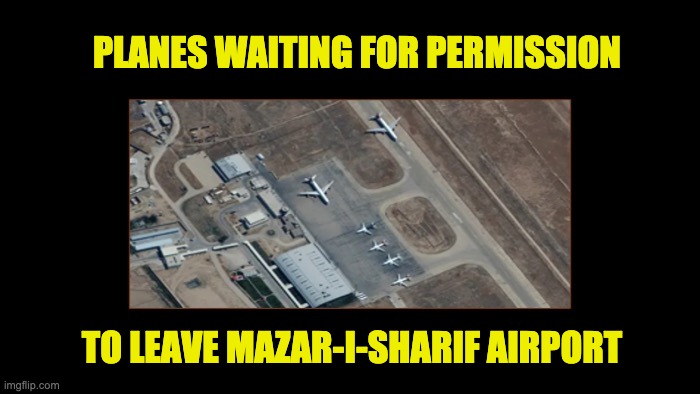 Taliban holding Americans hostage.
US President Joe Biden’s plan to speed up the US troop withdrawal from Afghanistan weeks ago is still threatening American lives and the lives of people who we promised to protect.

The latest trouble comes from an airport in northern Afghanistan. Americans, Afghan girls, and Afghan interpreters are attempting to flee but have been prevented from leaving the country by the Taliban. Rep. Michael McCaul (R-TX) said on Fox News Sunday that airplanes are stuck at the Mazar-i-Sharif International Airport with Americans on board. The planes are unable to take off because they had not received clearance from the Taliban.

Per McCaul, along with the Americans,  Afghan interpreters were also on the planes:

“We have six airplanes at Mazar-i-Sharif airport, six airplanes, with American citizens on them as I speak, also with these interpreters, and the Taliban is holding them hostage for demands right now,” he said on Fox News Sunday morning. “State has cleared these flights, and the Taliban will not let them leave the airport.”

McCaul added that the Taliban “are not clearing the airplanes to depart” and that the people trying to flee have “sat at the airport for the last couple of days,” in part because “the Taliban want something in exchange.”

WAIT FOR A SECOND! How can that be? Wasn’t the word from the Biden Administration that the Taliban were now nice guys who will let everyone leave? President Biden wouldn’t lie to America—just ask the mainstream media, they’ll tell you that.

A video of the McCaul interview is at the bottom of this post.

According to the Washington Examiner.

Ascend, a nonprofit organization dedicated to empowering Afghan teens and young women through mountaineering said it has people on planes forbidden to take off.

Marina LeGree, the founder and executive director of the program, told the Washington Examiner, “We’ve been stuck for 6 days. First, our own State Dept caused a delay and now it’s the Taliban and Kam Air in endless negotiations about price (or so we’re told).”

That makes sense because everything Biden’s far-left administration does is meant to extract a price—not a cash price but a political one. And the ignorant way they handle the evacuation was all to generate love from the progressive wing of his party who wanted it done differently than Trump planned it because “orange man bad.”

My group is mostly Hazara girls aged 16-23,”  “It isn’t safe for them to be held in the large group of anxious people, jostling for space. Gatekeepers are now letting in more and more people to the holding area for a price, and those people are trying to bribe their way onto the manifests. It isn’t at all clear who is in charge, or how this will end.“

The Taliban would love to have those young women to sell as wives and sex slaves.

CBS reporter Christina Ruffini backed up the story and even was allowed to read parts of a State Dept. memo,

“We understand the concern that many people are feeling as they try to facilitate further charter and other passage out of Afghanistan. However, we do not have personnel on the ground, we do not have air assets in the country, we do not control the airspace — whether over Afghanistan or elsewhere in the region,” a State Department spokesperson told CNN.

“Given these constraints, we also do not have a reliable means to confirm the basic details of charter flights, including who may be organizing them, the number of U.S. citizens and other priority groups on-board, the accuracy of the rest of the manifest, and where they plan to land, among many other issues,” the spokesperson said.

Ya think?  Is it that the spokesperson is too stupid to understand that Secretary of State Winkin and Blinken, and Nod helped make that decision along with a feeble-minded President, NSA Jake (not Ed) Sullivan, who lied to America about the recent Israel conflict with the terrorist Hamas,, and a Pentagon leadership more concerned about white rage than protecting our country and our troops.

Folks, I have to be honest. This particular white guy is raging. No, I’m not going to commit any violence. That is not the way anyone should handle things. But I am angry as all hell about the Afghan screw-up, be it Biden’s stubbornness to do it any but the way Trump laid it all out for him, the fact that we left weapons behind so the terrorist Taliban is better armed than many of our allies, and that no one in this administration seems to give a flying freak about the promises we broke and the people we left behind.  And they keep feeding America with lies and excuses.

It’s hard to understand how any of these people sleep at night,