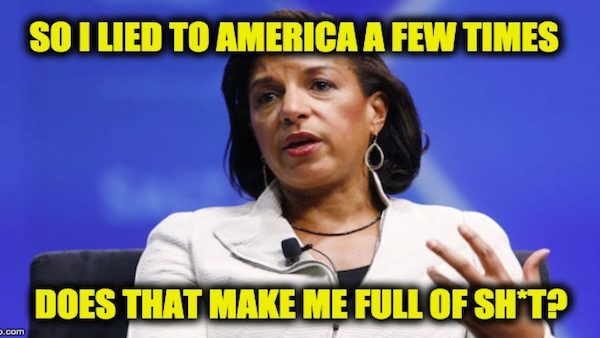 The Florida Republican’s comments come as a response to a video of the former National Security Advisor under Barack Obama telling Judy Woodruff of PBS that she “know(s) nothing” about the unmasking of members of President Trump’s 2016 transition team.

Woodruff  began the interview with, “I began by asking about the allegations leveled today by House Intelligence Committee Chairman Devin Nunes that Trump transition officials, including the president, may have been swept up in surveillance of foreigners at the end of the Obama administration.”

Newly unclassified documents reveal that Rice’s claim couldn’t have been further from the truth. Not only did she have knowledge of the Flynn unmasking, but dozens of other members of the Obama-Biden administration requested the unmasking as well.

If @RichardGrenell had been Director of National Intelligence back in 2017, @Comey would probably already be UNDER the jail.

His disclosures lay bare the coup before the American people.

It was more than a few unmaskings, in April 2017, the Daily Caller reported that Susan Rice ordered U.S. spy agencies to produce “detailed spreadsheets” of legal phone calls involving Donald Trump and his aides when he was running for president, according to former U.S. Attorney Joseph diGenova.

“What was produced by the intelligence community at the request of Ms. Rice were detailed spreadsheets of intercepted phone calls with unmasked Trump associates in perfectly legal conversations with individuals,” diGenova told The Daily Caller News Foundation Investigative Group Monday.

“The overheard conversations involved no illegal activity by anybody of the Trump associates, or anyone they were speaking with,” diGenova said. “In short, the only apparent illegal activity was the unmasking of the people in the calls.”

Other knowledgeable official sources with direct knowledge and who requested anonymity confirmed to The DCNF diGenova’s description of surveillance reports Rice ordered one year before the 2016 presidential election.

Gaetz also took aim at an email Rice wrote to herself on January 20th, memorializing a meeting that occurred weeks earlier in which she stressed that then-FBI Director James Comey assured Obama that they had run things “by the book.”

“If I were writing myself an email where three times I had to say I did everything ‘by the book,’ that is certainly more incriminating than it is exculpatory,” a sarcastic Gaetz added.

The congressman went on to eviscerate Comey, alleging that if acting Director of National Intelligence Richard Grenell – who declassified both the list of unmasking requests and the Rice email – had been in this position previously, Comey would be in serious trouble.

“If Ric Grenell had been the director of national intelligence back in 2017, Jim Comey would probably already be under the jail,” Gaetz claimed, “because the Grenell disclosures laid bare the coup before the American people.”

Being a serial liar seems to be the most prominent attribute at the top of Rice’s resume.

She was, after all, the sacrificial lamb who covered for Hillary Clinton, according to her own book, by appearing on five Sunday television interviews after the Benghazi terrorist attack in 2012, falsely blaming the attack on a YouTube video.

.@AmbassadorRice is “humbled and honored” she’s reportedly a Biden VP contender.@MargaretHoover: Would you say yes if he asked you?
Rice: I certainly would say yes.

Rice: …if that were the role in which he felt I could best serve, then I'm not going to say no. pic.twitter.com/zSG15gL9Mx

What role is she auditioning for with a reputation like that?

Rice told PBS she is “humbled and honored” to be on a list of token women Joe Biden has insisted he must choose as his Vice President, and “certainly would say yes” if asked.

A Biden-Mozart ticket would almost certainly guarantee a Trump victory.