Americans are NOT happy with Biden 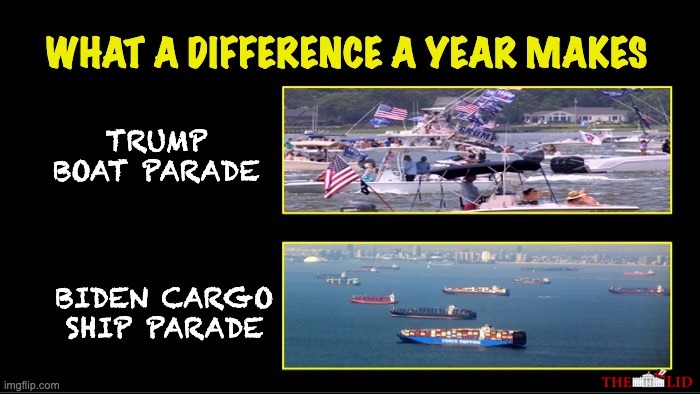 Problems are continuing to pile up for President Joe Biden, and the nation at large has certainly taken notice. supply chain disaster’s Biden’s fault

Biden’s first nine months in office have been nothing but trouble, in all honesty, and the Democratic Party isn’t even trying to hide that fact anymore.  Between the border crisis, the labor shortage, and his inability to get even the most basic bits of his agenda passed in Congress, it appears at times that the administration is simply doomed.

Last month, Popular Science reported that “a record 88 ships were sitting on the horizon, forming a line of vessels stretching south over 40 miles, from the Port of Los Angeles entrance all the way down to Dana Point.” Since then it’s only gotten worse and spread to ports throughout the U.S.

With the supply chain issue bearing down on the nation, Twitter users are placing the blame squarely where it belongs, on the Commander in Chief. And the tweet world is blaming Joe in a brutal fashion.

The hashtag #EmptyShelvesJoe shot to the top of the trending topics on Twitter Thursday amid the supply chain crisis threatening the nation’s economy and holiday shopping.

Social media users employed the tagline to rip President Biden for empty shelves and skyrocketing prices caused by a backlog of shipping containers waiting to dock at California ports.

And they weren’t holding back.

“Just went food shopping…again…thanks #EmptyShelvesJoe I really love having to go every day now in order to find what used to take one trip,” one account wrote, along with a photo of near-empty shelves at a grocery store.

“I’m pretty sure @JoeBiden and the Democrats in DC are eating just fine and are having no issues getting what they need,” another Twitter user posted. “The rest of us lowly Americans who actually go to the grocery stores, not so much. #EmptyShelvesJoe.”

Biden recently announced that the federal government would be easing restrictions for port employees in an effort to expand working hours and power through the logjam. It won’t help because much of the reason the container ships aren’t being unloaded is that there aren’t enough truck drivers to pick up the product and take it where it’s needed.  That is a result of Biden’s leftist “free money for all” policies.