All Of A Sudden Liberals Care About Govt. Spending (On Securing Border) 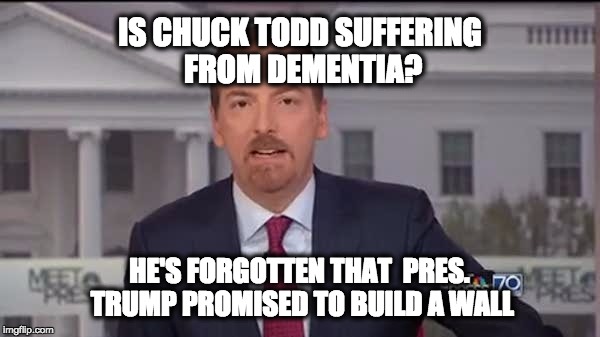 Liberals can be so duplicitous.  During the eight years of Obama their only question was why can’t the government print more money?  Now that Donald Trump is president, and implementing programs they do not agree with, their question is now, is that the best way to spend money?  Such was the behavior of Chuck Todd on Meet The Press. Well maybe. Chuck Todd was interviewing John Kelly on Meet The Press on Easter Sunday and acted as if he forgot every major issue Trump ran on. Maybe poor Chuckie has dementia.

Department of Homeland Security Secretary John Kelly sat down with NBC’s Chuck Todd Sunday morning on Meet the Press to discuss all things security, particularly those things that pertained to illegal immigration and our Southern border.

Interestingly, Todd, who has never been mistaken for an economic (or any other kind of) conservative decided to push back on the Trump administration’s illegal immigration stance from an budgetary point of view. After setting the table to discuss the Trump administration’s efforts on stemming the illegal immigrant tide, wondered if deporting criminal illegals was actually the “best use” of our money.

Chuck Todd: Is this the best use of money? Is this the resources you need? That you need to hire more people to deal with this issue? Is that your number one problem?

John Kelly: Yeah, I think so. You know, there’s two aspects. Of course, ICE operate more or less in the interior and do targeted actions against illegal aliens plus. What I mean by that is, just because you’re in the United States illegally doesn’t necessarily get you targeted. It’s gotta be something else. And we’re operating more or less at the other end of the spectrum, and that is criminals, multiple convictions…

Chuck Todd: I guess I’m going at this, would the money for the border wall be better spent on going after the visa overstays? And would that actually deal with the problem President Trump campaigned on?

Does Chuck Todd have dementia? President Trump promised the border wall at every single campaign stop.

John Kelly: Chuck, you really do have to secure the border somehow, first and foremost. The very, very, very good news is, for a lot of different reasons, the number of illegal aliens that are moving up from the south has dropped off precipitously. I mean we’re down 65%, 70% in the last two months. These are the months that we should see a steep incline in illegal movement. It’s down, as I say, by almost 70%.

Secretary Kelly also explained to Todd that the Trump administration was being more rigorous in applying the law to a broader spectrum of people than the Obama administration ever did. As an example, Kelly told Todd that even a single DUI conviction could get the deportation process started for some illegal immigrants (depending on other more nebulous circumstances).

John Kelly: It is fair to say that the definition of criminal has not changed, but where on the spectrum of criminality we operate has changed.

Chuck Todd: So can you give me an example of somebody that wasn’t deported before that you’re deporting now?

John Kelly: Well, someone, as an example, with multiple DUIs. Even a single DUI, depending on other aspects, would get you into the system. And remember, for the most —

Chuck Todd: And this wouldn’t have been the case under the previous administration.

What is the definition of “criminal” in the Trump administration? DHS Secretary John Kelly explains on #MTP pic.twitter.com/5NtKsJcDBh