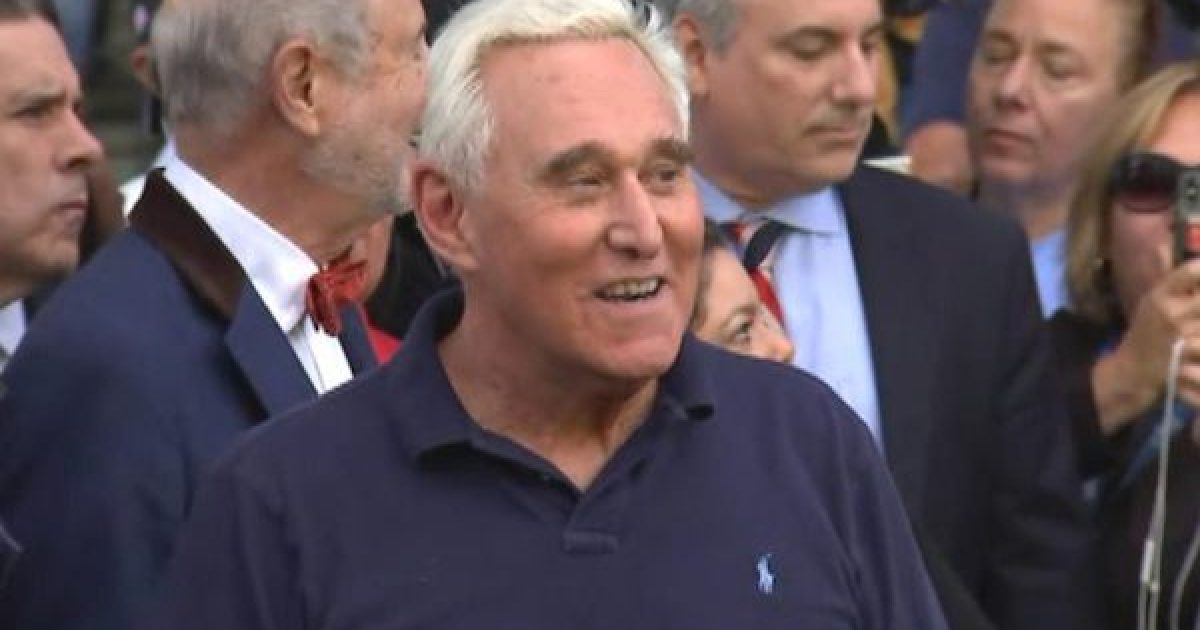 Sometimes what the subject of an investigation doesn’t know can be as important, or more important as what the subject knows.
Andrew McCarthy has an excellent article at National Review this weekend.  It discusses how the Roger Stone indictment clarifies what the Mueller investigation has known for months: that the evidence in the Russia probe shows the opposite of the probe’s premise.  It shows that the Trump campaign organization did not have prior, complicit knowledge of what Russia may have been doing to “meddle” with the 2016 election.

In the course of laying out his case, McCarthy addresses an eye-catching passage in the Stone indictment (which can be read in full here).  McCarthy alludes to the same thing that caught my attention, in paragraph 12 on page 4.  The active voice in which background information for the charges against Stone has framed switches to a passive voice – just for this one element of the case – and the indictment is coy about the character(s) involved in the activity.

After the hacked DNC emails are published in July 2016, a “senior Trump campaign official was directed to contact Stone about any additional releases and what other damaging information [WikiLeaks] had regarding the Clinton campaign.”

“Was directed”?Naturally, you’re thinking, “was directed by whom?” By Trump? Could be . . . Stone says it was not, but who knows?

McCarthy goes on to assert that it doesn’t really matter, or at least not as much as another point.

The point, however, is not who did the directing but why it was thought necessary to reach out to Stone. The Trump campaign had to ask Stone because it was in the dark.

I agree with McCarthy as far as that goes.  Ultimately, I don’t think it matters who the two mysteriously “undenominated” parties were: the directing party, or the “senior Trump campaign official,” who is not given a denomination (such as Person 3, etc.) in the indictment.

A senior Trump campaign official who was in contact with Stone in October 2016 was reported in the last 24 hours to have been Steve Bannon.  It’s possible that Bannon was the one who “was directed” to contact Stone in July, although that hasn’t been suggested publicly, as far as I can tell.  If so, however, Bannon may have said that he was directed to make this inquiry to Stone in an interview with Mueller, or in testimony to Congress.

But this informative little passage in paragraph 12 isn’t phrased as if it was learned about from interviews or other documented investigative activities performed by the Mueller team – or, for that matter, gleaned from a separate investigative source such as testimony to Congress.

The way it’s phrased shows this about it: the Mueller team knows for sure that someone unnamed directed the “senior Trump campaign official” to contact Stone about what WikiLeaks had on Hillary Clinton.  The team clearly knows who both persons were, yet for some reason doesn’t want to assign significance to them in the indictment.  Instead, the indictment seems to make a quiet detour behind a screen to avoid doing that.

The indictment would be stronger as a basis for a theory of Russia-Trump conspiracy if this single allusion – not anything else in the indictment, but specifically this passage – were written to suggest the information was acquired in a prosecution-ready manner.  A deposition from Bannon, or another top official, would be such a manner.

Highlighting the interest of someone higher up than Bannon would constitute the first potential evidence that a desire to collude with WikiLeaks (if not with Russians) was actually a “thing” in the Trump campaign.

But this nugget isn’t highlighted.  If anything, it’s glossed over.  And here’s what stands out: it looks oddly self-evident that the prosecutor’s certainty about the information doesn’t rely on the testimony of the “senior Trump campaign official.”  The data point itself is essential, but the indictment leaves off the ephemeral clues about its origin that would affirm its credibility.

As it’s phrased, therefore, the most likely source of the certainty about this information is that it was acquired by electronic surveillance of the Trump team.  One person on the Trump team directing another to do something recorded so precisely, especially when phrased the same way as in the indictment, means basically that this information is from a text, email, or phone call.

Other texts and emails are referred to specifically in documents on the investigation, such as the Stone indictment, Congressional testimony, and correspondence viewed by reporters for outlets like the New York Times.  Those pieces of mail appear to have come from routine law enforcement reviews of the subjects’ phone and/or computer records.

But there’s a noticeable void surrounding the data point about July 2016.  That bolsters the likelihood that such specific knowledge as that in paragraph 12 was gained from electronic surveillance.

Even if, as is very possible, the Mueller team compared information from Bannon or another top official with data from electronic surveillance, the point remains that the certainty Mueller clearly has about it is not evidenced as if that certainty comes from the testimony. Instead, the certainty comes from a source the indictment isn’t anxious to overtly implicate or to call attention.  Electronic surveillance is the most probable source for such a level of unexplained certainty.

The point here is not to rehash long-running arguments over justifications for electronic surveillance of the Trump campaign.  It’s been clear since we first learned of the FISA approval on Carter Page that such surveillance was done.

The second feature is one I’ve written about before, which bears frequent repeating.  This exchange occurred in July 2016.  At the latest, any related Trump team correspondence would have been in the hands of the FBI in late October or early November 2016, just after the FISA application on Carter Page was approved.

No one – not Strzok, Priestap, McCabe, Comey, Yates, Lynch, or anyone else in the loop – had to wonder, after the FISA application on Page was approved, who on the Trump team was talking to whom about WikiLeaks or Russian hacking.  The picture on that was never a mystery to the FBI or Justice Department, once the Carter Page surveillance application was in force.

That means that what Mueller has known for months, and what we are now seeing laid bare in the Stone indictment, the FBI and DOJ have had to be aware of for years.  If there was a text or email or phone call indicating it, they knew more than two years ago that the Trump campaign had to get someone to ask WikiLeaks what there was to release from Hillary’s emails, because the Trump campaign hadn’t been colluding with Russians and didn’t know.

So Trump’s long-running question – why is the Mueller probe continuing on the premise that his campaign was complicit in Russian meddling? – It is not only a valid one.  It’s the second most important question of all.  The most crucial question is: Why did the Mueller investigation start?