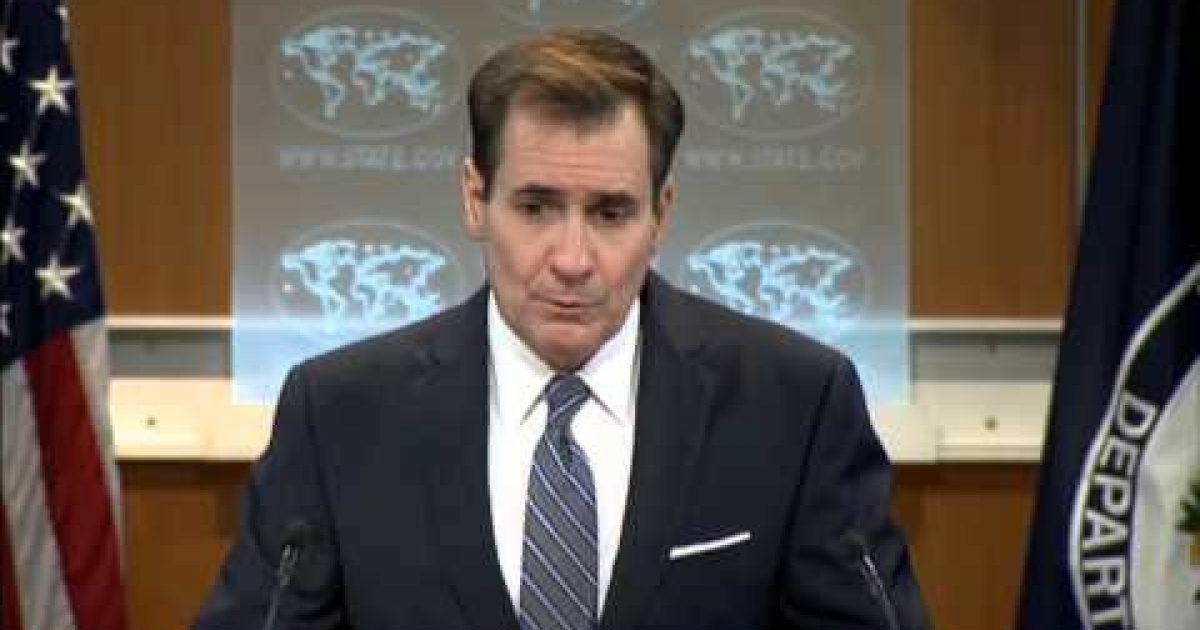 One of the Hillary Clinton emails released today seemed to show her telling one of her advisers to send her secure information in an insecure manner. And as per usual when the Associated Press’s Matt Lee pressed State Dept. SPOX John Kirby about it during today’s press briefing, what ensued included hemming, hawing, and tap dancing.

The email in question was sent on June 17th 2011—Hillary Clinton adviser Jake Sullivan was unsuccessfully trying to send something to the Secretary of State on a secure fax machine.

“They say they’ve had issues sending secure fax,” Sullivan emailed, “They’re working on it.” Clinton responded by telling him to remove the heading which marked the fax as confidential and email it as if it wasn’t secure. Specifically she said,  “If they can’t, turn into nonpaper w no identifying heading and send nonsecure,”  (see emails below).

During today’s state department briefing Matt Lee tried hard to get John Kirby to commit to an answer, about whether or not Ms. Clinton’s actions were “a problem”  but Kirby kept tap-dancing away.

LEE: “Former Secretary Clinton and Jake Sullivan on June 16th through the 17th of 2011 in which one of them which she tells Jake to that if she can’t get a secure fax through or if there is a problem with the secure fax going through she asks him if he would remove the header, make it non-paper and email it to her on her private server. Do you know what this is about? They appear to have been talking points for a telephone conversation she was going to have with Senator Cardin, but I’m looking to you to see if you can confirm that and also to ask whether or not this is an issue? A problem for the State Department.”

KIRBY: “On the first part of your question, I do not know. I don’t know anything more about the document in question or the email traffic than what you do having seen it. So I don’t have additional context on it, and as I’ve said many times I’m going to continue to refrain to speaking on specific content here for former Secretary Clinton’s email practices, that’s not our role right now. The second part of your question, it was about whether it was a problem. Can you be more specific about what you mean about that?”

LEE: “Yeah, some including Senator Grassley say that this suggests that former Secretary Clinton was asking her Deputy Chief of Staff to remove potentially classified information from what was to be a secure fax and put it into an email that would be sent unclassified that would be sent to her private server. Would that be a violation of State Department rules if that was the case? I mean first of all is that the case, is that what was happening here?”

KIRBY: “I don’t know that it’s the case, and as you know I’m not going to talk about former Secretary Clinton’s email practices, that are not our role here. Not least of which also, those practices are under review and investigation. So it wouldn’t be appropriate for me to talk about that, and as for the intention, the motivation, I simply wouldn’t have that information

And theres more…..Lee went on to ask Kirby if he thought Hillary was trying to skirt the rules of classification.

LEE: “So in some respects though it doesn’t really matter how she ended up getting these talking points. I mean it could’ve been faxed to her; you could’ve had some guy bring it over in a briefcase handcuffed to his wrist, or carrier pigeon for that matter. The point that I think Senator Grassley and others are asking about or trying to make, is that in this email she asked her aide to strip off the heading of something that was going to be sent on a secure fax and turned it into a non-paper and then, their implication, the critics implication is to disguise it, what might have been Class 5 information, and then send it to her on her email. So is that a concern of the department that this might have been an attempt to skirt the rules of classification.”

KIRBY: “Once again our role is to make these documents public, not to make judgments about the content of them, or the practices.”

LEE: “But you’re making judgments about the content of them all the time. That’s what you do when you redact them, you go through and review them, you judge whether.” KIRBY: “That’s appropriate security related work that has to be done, because of the law. The law makes that so, it’s not because we’re making some subjective decision, that well we don’t want Matt Lee to know about this so let’s just redact it. There’s a law that says.”

KIRBY: “Well if I had my way. But no there is a law that governs. We’re not making this stuff up. We’re not making subjective judgments about the practices that the former Secretary used in how she connected with her staff, that’s not our job. That’s not our role here, and we’re not making subjective judgments about the content of the traffic, except to say we have a very, very, as you guys know better than me, a very rigorous, thorough, and sometimes slow process to redact them appropriately for public consumption.  That’s our job.”

LEE: “Sometimes slow is an understatement.”

KIRBY: “These practices, and this issue is under several reviews and investigations as you guys know that.”

LEE: “But whose job is that to determine whether the rules of the law regarding classification.”

KIRBY: “It would be those who are investigating. They have to make those determinations. That’s not for the State Department to do.”

LEE: “So the State Department never makes any judgments about whether the rules of classification have been broken?”

KIRBY: “Of course we make judgments about classifications everyday about any number of documents, and traffic that we communicate with now, right now. But in terms of former Secretary Clinton’s practices and the content of that traffic those are issues under review and investigation and wouldn’t be appropriate for us to speak to.”

I am not a lawyer, nor do I play one on TV, but it seems to me that by instructing Sullivan to strip a document of its ‘identifying heading and send nonsecure’ instead of via classified, Ms. Clinton was breaking the law and it should be a “problem” for State.  Unless of course the information was not classified in any way and Sullivan just wanted to use the classified server. Of course In 2010, Hillary Clinton asked the same aide to “just email” information that was on the State Department’s classified system