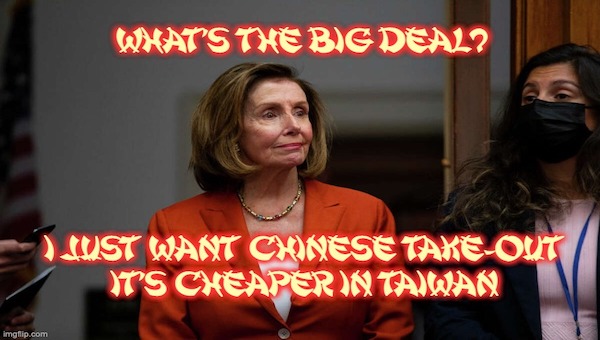 For the first time in decades, it truly feels as though the United States is no longer respected or feared on the world stage.

Russia is brazenly invading and pillaging Ukraine, North Korea is threatening to nuke America, and Iran has said they’re ready to make an atomic weapon. These are the sort of things that make you wonder what’s changed in the last year or so.

Now, to add to the bombastic turn of attitude, China is threatening to shoot down House Speaker Nancy Pelosi’s plane should she attempt to visit Taiwan.

A Chinese Communist Party mouthpiece said on Friday that it could shoot down Democratic House Speaker Nancy Pelosi’s plane if she makes a stop in Taiwan, a move he said is tantamount to an “invasion” of the island.

“If U.S. fighter jets escort Pelosi’s plane into Taiwan, it is invasion,” Hu Xijin, an analyst for the Chinese state-controlled Global Times propaganda outlet, said on Twitter. “The PLA has the right to forcibly dispel Pelosi’s plane and the U.S. fighter jets, including firing warning shots and making the tactical movement of obstruction. If ineffective, then shoot them down.”

This wasn’t the first time that Xijin has made wild statements about Pelosi’s potential trip.

Xijin also has said in recent days that the Chinese military should “accompany” Pelosi’s plane during her tour.

“The Chinese mainland must be brave enough to take this step of flying warplanes over the island, which, unlike warplanes flight around Taiwan, can truly reflect China’s sovereignty over the territory, and is more substantial than any visit to Taiwan by senior foreign officials,” Xijin said in comments highlighted by the Middle East Media Research Institute, which is tracking the situation. “Using Pelosi’s visit to Taiwan to complete this leap is most likely to make it a peaceful transition.”

And while the threats from China certainly do signify a loss of respect for America within the global community, capitulation to the CCP would constitute an ever further degradation of our standing.