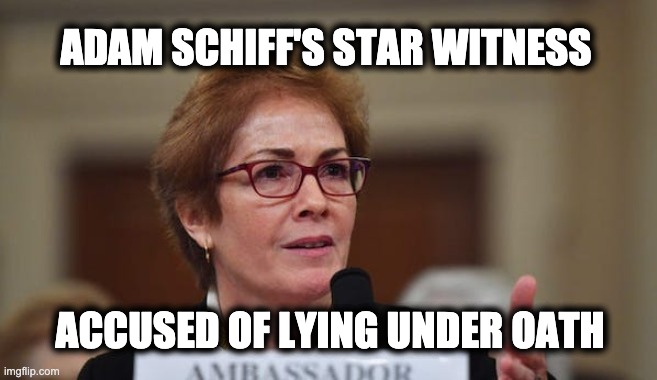 Lying under oath during an impeachment hearing seems like it might be kind of a big deal, don’t you think? Especially when that lie hides evidence exculpatory to the guy being accused? Ambassador Yovanovitch lied

Think back, WAY back. All the way to October. It seems like a lifetime ago, now, doesn’t it?

Back then, we had the insufferable Mister Vindeman who was every bit the proud patriot as, say, James Comey. We also had the Left’s flavor of the month, one Ambassador Marie Yovanovitch.

The media practically swooned as she walked down that hall on her way to the hearings. She was their darling, their proxy, perhaps even their champion in the media’s ongoing war against Orange Man Bad.

But she lied to Congress at least twice. The first time was when she testified to Schiff’s underground double-secret hearings.

During her October testimony to Schiff’s basement bazaar also known as the House Intelligence Committee,  Yovanovitch told U.S. Rep. Lee Zeldin (R-NY) under oath, about the email she received Congressional staffer, Laura Carey, She added that she never responded to it. She did respond, but she used her personal email account to respond to Laura Carey just two days after the “whistleblower” filed the complaint and about a month before the complaint became public and ignited another of the Democratic Party’s efforts to change the results of the 2016 election.

Depending on whether there is an (R) or a (D) after your name Ambassador Yovanovitch was either a whistleblower or a cold-blooded liar and political snake. Yovanovitch was a serial liar.

During President Trump’s impeachment, former U.S. Ambassador Marie Yovanovitch testified to Congress that she knew little beyond an initial briefing and “press reports” about Burisma Holdings, the Ukrainian natural gas firm that had hired Vice President Joe Biden’s son Hunter and was dogged by a corruption investigation.

But newly unearthed State Department memos obtained under the Freedom of Information Act show Yovanovitch’s embassy in Kiev, including the ambassador herself, was engaged in several discussions and meetings about Burisma as the gas firm scrambled during the 2016 election and transition to settle a long-running corruption investigation and polish its image before President Trump took office.

Yovanovitch, for instance, was specifically warned in an email by her top deputy in September 2016 — three years before her testimony — that Burisma had hired an American firm with deep Democratic connections called Blue Star Strategies to “rehabilitate the reputation” of the Ukrainian gas firm and that it had placed “Hunter Biden on its board,” the memos show.

She also met directly with a representative for Burisma in her embassy office, less than 45 days before Trump took office, a contact she did not mention during her impeachment deposition.

The discussions about Burisma inside Yovanovitch’s embassy were so extensive, in fact, that they filled more than 160 pages of emails, memos and correspondence in fall 2016 alone, according to the State Department records obtained under FOIA by the conservative group Citizens United.

The contacts included a detailed private letter hand-delivered to Yovanovitch by one of Burisma’s lawyers in September 2016, a briefing later that month from her staff on Burisma’s issues, and a meeting scheduled between the ambassador and a Burisma representative shortly before Christmas 2016 as the Obama administration was preparing to leave office.

It will be interesting to see if she is asked about he false testimony, and how she squares that circle in reconciling her testimony to the facts involved.

We have already seen how the media and the Left demands and even INSISTS that government officials have the book thrown at them for lying. They are STILL trying to demonize Flynn.

We can only assume they would similarly approve of throwing the book at their beloved Ambassador as well. (stop laughing)

Because they couldn’t POSSIBLY be motived by politics…could they?