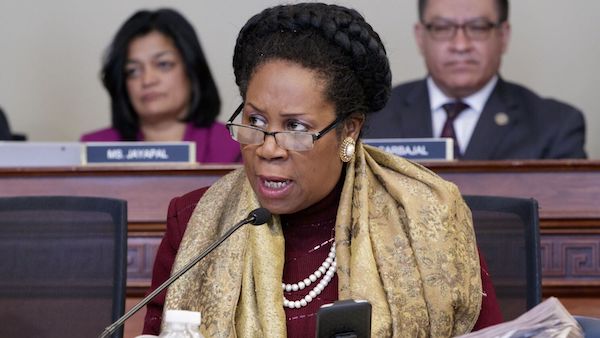 It seems that “stupid” reigns supreme among some on the left.  In a video recently posted to Twitter, Rep. Sheila Jackson Lee, the Texas Democrat once dubbed a “Congressional boss from Hell,” cited a study that claims reparations for slavery could have cut the COVID transmission rate.

“Reparations for African-Americans could have cut COVID-19 transmission and infection rates both among blacks and the population at large,” Jackson Lee claimed.

We’re not kidding…  In case you don’t believe us, here is a video of her claim, made on the floor of the House of Representatives:

REP. JACKSON LEE: "Reparations for African-Americans could have cut COVID-19 transmission and infection rates both among blacks and the population at large." pic.twitter.com/GpgKBr2AHf

As much as we’d love to blame Jackson Lee for this bit of abject stupidity, we can’t.  As Twitchy tells us, this is an actual study, from the Harvard Medical School no less:

To estimate the impact of structural inequities between Black and white individuals, the researchers set out to capture the effect of reparation payments on the Black-white wealth gap in the state of Louisiana.

Their analysis, published online on Feb. 9 in Social Science & Medicine, suggests that if reparations had been made before the COVID-19 pandemic, transmission of SARS-CoV-2 in the state’s overall population could have been reduced by anywhere from 31 percent to 68 percent.

The work was done in collaboration with the Lancet Commission on Reparations and Redistributive Justice.

“While there are compelling moral and historical arguments for racial-injustice interventions such as reparatins, our study demonstrates that repairing the damage caused by the legacy of slavery and Jim Crow racism would have enormous benefits to the entire population of the United States,” said study senior author Eugene Richardson, assistant professor of global health and social medicine in the Blavatnik Institute at Harvard Medical School.

“Ah, the Lancet Commission on Reparations and Redistributive Justice,” Twitchy remarked.  “We’re sure they approached this with an open mind.”

Yeah, right.  And if you believe that, we have a bridge for sale.  Cheap.

The reaction to this was pretty much what you’d expect:

Wait… all citizens needed was more cash in their bank accounts & less people would’ve gotten Covid? Wow! Why didn’t you tell us about THAT scientific “FACT” 2 years ago, Rep Lee?

Indeed… I have friends who got Covid, and they were miserable. If only they had been given more money, there’s no telling how much misery they would have avoided.

So a person who has never owned a slave is expected to pay money to someone who has never been a slave. Makes perfect sense. 🤷‍♂️🤦

To a lunatic leftist like Jackson-Lee, maybe. The rest of us, not so much.

Let Africa pay reparations. African Tribes are the ones that forcefully captured and sold their own people.

So much for “science.”