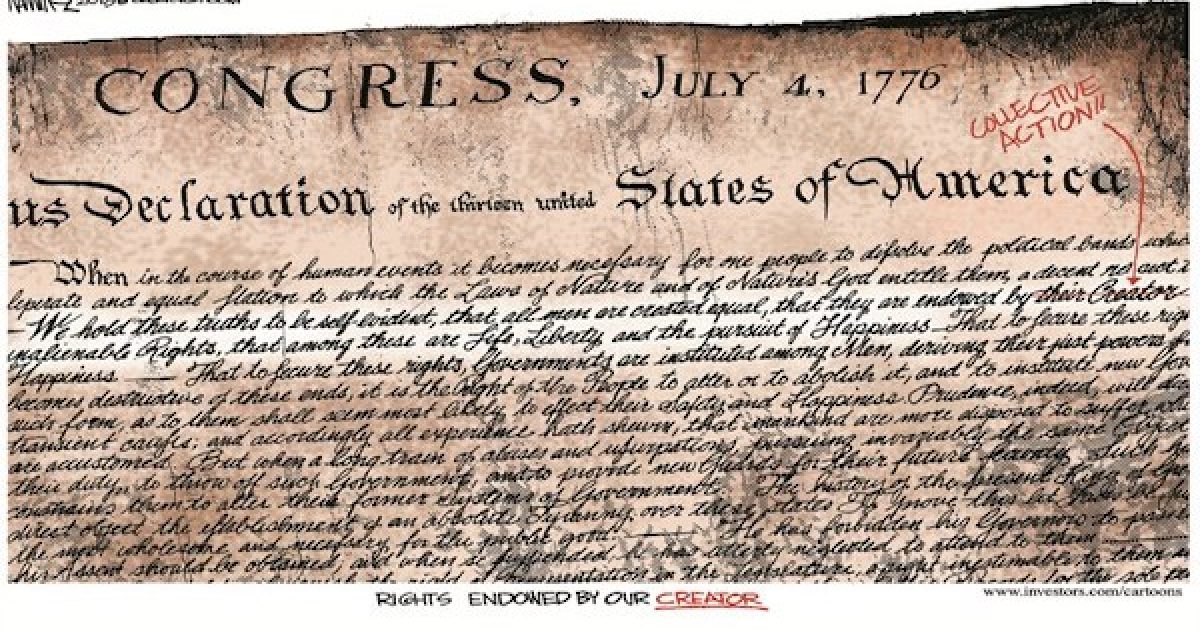 As expected NRA chief  Wayne LaPierre’s speech at CPAC was panned by liberal commentators.  But there was a tiny part of his speech that was trashed more than others—the part where he mentioned God.

And there is no greater personal individual freedom than the right to keep and bear arms, the right to protect yourself, and of the right to survive. It is not bestowed by man but granted by God to all Americans as our American birthright. So I call right now today on every citizen who loves this country, and who treasures this freedom, to stand and unflinchingly defended the second amendment, the one freedom that protects us all in this country

Mr. Applebaum, a NY Times Washington correspondent needs to take a remedial lesson in American history because one of the unique things about this great republic of ours is that our founding documents believe our rights are not granted by the government but by God, or as Jefferson wrote in the Declaration of Independence:

“We hold these Truths to be self-evident, that all Men are created equal, that they are endowed by their Creator with certain unalienable Rights, that among these are Life, Liberty, and the Pursuit of Happiness”

The entire purpose of the U.S. Constitution is to protect the government from infringing on our unalienable rights. It doesn’t grant or create legal rights. That’s how our document is different than others. It recognizes and protects rights that already inherently exist and those rights cannot be altered, limited, or removed by man-made laws or governments.

The right to life, to protect one’s life, family, property, business, etc,  with guns and other weapons, is one of these unalienable rights protected by the in the Second Amendment:

The Second Amendment is one of ten in the Bill of Rights that lists rights that “shall not be infringed” by the government. The Supreme Court emphasized three primary facts (among others), specifically, when it ruled on The District of Columbia v Heller in 2008.

First, the Right to Bear Arms is a pre-existing right. The Court held that,

“The Second Amendment implicitly recognizes the pre-existence of the right and declares only that it ‘shall not be infringed’ … this is not a right granted by the Constitution.”

Second, the Right to Bear Arms is an individual right. The Framers repeated three times that “the right of the people to keep and bear arms shall not be infringed.” The Court ruled that each of these three instances “unambiguously  to individual rights, not ‘collective’ rights, or rights that may be exercised only through participation in some corporate body.”

“Nowhere else in the Constitution does a ‘right’ attributed to ‘the people’ refer to anything other than an individual right.”

And, this individual right, the Court noted, was an “inherent right of self-defense [that was] central to the Second Amendment right” (see page 56 of the Heller decision). A militia at the time comprised all citizens physically capable of defending themselves; including, ” … the ‘right of self-preservation’ as permitting a citizen to ‘repe[l] force by force’ when ‘the intervention of society in his behalf, may be too late to prevent an injury’” (page 21 of Heller).

Third, the Right to Bear Arms is necessary for citizens to defend themselves from domestic and/or foreign government threats. In this way, the “security of a free state” rests quite literally in the hands of its people. Citizens have the right to defend their nation. Using guns to defend one’s home, property, family, and country was “useful in repelling invasions” (page 24 of Heller). The Court emphasized:

“When the able-bodied men of a nation are trained in arms and organized, they are better able to resist tyranny” (Heller pages 24-25).

“History showed that the way tyrants had eliminated a militia consisting of all the able bodied men was not by banning the militia but simply by taking away the people’s arms, enabling a select militia or standing army to suppress political opponents” (page 25).

In the end, the Supreme Court reinforced three basic facts about the Constitutional Right to Bear Arms. This right is inalienable. It belongs to individuals. It belongs to citizens (not the time to get into the rights of illegals–different conversation).

It is a right on which no government can infringe without consequence because it wasn’t granted by a government. Guns are necessary for the protection and survival of the citizens of the nation against threats both foreign and domestic.