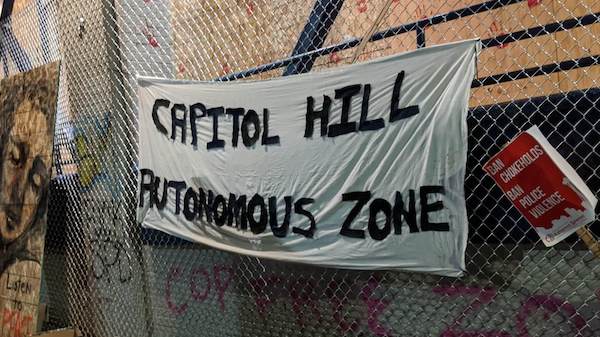 Every society must have law and order, a lack of law and order will result in the breakdown of society, further, this lack will result in chaos – just look at Seattle’s vaunted (by the Left anyway) “autonomous zone.”  This isn’t up for debate; this is a fact, period.  Those who advocate for defunding or eliminating the police are only doing so to remove people they see as an impediment to their own actions and goals, most of which are likely illegal.  These very same people will only replace the police with a system of their own making – this does not bode well for the citizens of any city that does this. Seattle autonomous zone

Case in point: a rapper named Raz Simone has assumed control of CHAZ. He (and others) is nothing more than a violent criminal and worse than that— according to some Twitter users:

And they're posting about making home made chemical weapons.https://t.co/Pwa9MNqE9w

After all the riots, looting, violence, and burning down of properties and cars, etc., now we have a group of people that have taken over a section of Seattle Washington.  Astonishingly enough, Seattle’s mayor and the governor of Washington have stood by and allowed this to happen.

This is setting a perilous precedent.

I will be (that I know of) the first to make a startling comparison here.  The Black Lives Matter group and Antifa, in particular, bear more than a little resemblance to Hamas, Hezbollah, etc. Before you laugh this off or rush to judgment, you need to read why I made this statement.

The fact that a group of people seized control of a portion of the city of Seattle and even issued a list of demands makes them terrorists whether or not they realize this.  This isn’t a game, it’s not funny, and there will be severe repercussions because of this.

President Trump is threatening to take back Seattle if the mayor and or governor won’t do it.  But whether or not he has the Constitutional power to do so is unknown,

“Radical Left Governor @JayInslee and the Mayor of Seattle are being taunted and played at a level that our great Country has never seen before. Take back your city NOW. If you don’t do it, I will. This is not a game. These ugly Anarchists must be stopped IMMEDIATELY. MOVE FAST!”

Radical Left Governor @JayInslee and the Mayor of Seattle are being taunted and played at a level that our great Country has never seen before. Take back your city NOW. If you don’t do it, I will. This is not a game. These ugly Anarchists must be stopped IMMEDIATELY. MOVE FAST!

Then there were the completely idiotic responses from the Leftist Governor and Mayor:

A man who is totally incapable of governing should stay out of Washington state’s business. “Stoop” tweeting. https://t.co/O6i04qmZ9v

Make us all safe. Go back to your bunker. #BlackLivesMatter https://t.co/H3TXduhlY4

This writer has to wonder how it is that the pathetic excuse for a politician like Inslee actually has the nerve to say that Trump is “totally incapable of governing.”  Who is the genius that stood by and did nothing as homegrown terrorists took control of a chunk of Seattle?

If all Governors and Mayors were this apathetically stupid, the U.S. would fall into complete and unrecoverable anarchy.  The U.S. would be ripe for the picking – by saying those who favor a global economy and system of government, like say China, among others.

These fools do not realize who or what they are dealing with, Trump does.  BLM and Antifa are not a bunch of college kids running around in masks doing fist pumps as part of a social justice movement.  These groups are well funded, highly trained, very organized, and they know exactly what they are doing.

If you doubt this, just read the following – right from a BLM “leader”:

Black Lives Matter (BLM) has declared war on the police and has released a blueprint for Black Panther style armed ‘patrols’ monitoring police officers on the streets. BLM’s leader revealed in an exclusive interview that they are mobilizing a highly-trained military arm. The group held a conference in Los Angeles with ‘military advisors’ charting out details of the ‘Black Opts’ blueprint – which stands for Black Opportunities. Black Special Forces officers are training the BLM’s Black Ops department of Black Opportunities. BLM is raising a ‘war chest’ and plans to build a headquarters in an unused church in New York. (Source)

Lastly, how about the fact that the morons who are in charge of CHAZ said that they are “Seceding From U.S.” and actually set up a Wikipedia page for their new “country.”  Yes, seriously…

As I mentioned in the article title, this is setting a dangerous precedent.  How long do you think before this same scenario is attempted in other U.S. cities if this current attempt at setting up a new “no cop co-op” BLM/Antifa fiefdom isn’t stopped?

No BLM and Antifa are not entirely on par with Hamas and Hezbollah, but they are headed in the right direction.

Wake up America, the time to stop these terrorist groups is now, and make no mistake – they are terrorists.