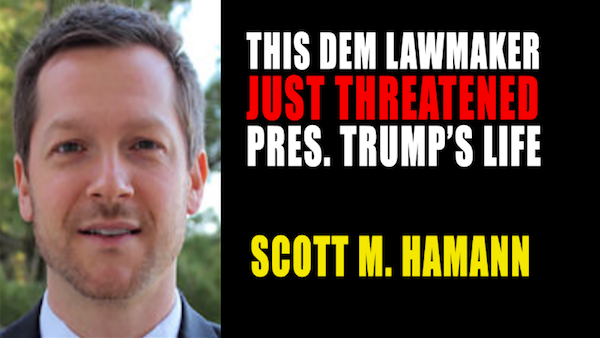 On Tuesday, Democratic State Representative Scott Hamann of Maine issued a profanity-laden violent threat against President Donald Trump, saying on Facebook that the president would only serve a half-term if he ever got within 10 feet of him. According to Lifezette, the Maine Democrat also targeted Trump supporters.

“It’s not only Trump supporters who can talk like complete a**holes,” he wrote. “As long as that’s what’s coming out of that side, then I’ll match you dumb f**ks word for word. Trump is a half-term president, at most, especially if I ever get within 10 feet of that p***y,” he added, clearly threatening Trump’s safety.

“Trump was installed by the Russians, because they wanted to undermine American democracy and embarrass our country,” he falsely claimed.

Hamann, Lifezette noted, falsely accused Trump of being a rapist and an anti-American racist:

“Trump is a joke, and anyone who doesn’t have their head up their a** understands that,” proclaimed Hamann. “The way he talks about and to women, that alone disqualifies him from leading anything,” Hamann said. “He’s an admitted rapist. He inserts his fingers into women against their consent. Would you be okay with leaving him alone in a room with your wife?”

Naturally, he attacked anyone who disagreed with his violent, unhinged and fact-free rant.

“Don’t like the truth? Can’t handle facts unless they come from Breitbart or Anonymous or your drunk uncle? Well then f**k you, snowflake,” he said.

“Some of use are educated and actually follow current events,” wrote Hamann. “100% of intelligent Americans agree that Trump is a complete loser,” he continued.

“But go back to clinging to your guns because you’re afraid. P*ssy. See, it’s not only Trump supporters who can talk like complete assholes.”

Republicans in the state were outraged.

“Rep. Hamann’s comments demonstrate that he has joined the ranks of the radicalized in the Democrat Party. After these public comments, including a threat on President Trump’s life, House Speaker Sara Gideon should demand his resignation,” Jason Savage, executive director of the Maine GOP, told LifeZette. “The good people of his district and across Maine deserve better than violent threats against our commander-in-chief.”

The best way I can describe these comments is simple: unhinged and dangerous,” Maine GOP Chair Demi Kouzounas said in a statement quoted by Lifezette.

“Words cannot even begin to describe the level of revulsion I feel after reading Representative Scott Hamann’s recent tirade that has come to light,” Kouzounas added. “Perhaps the most alarming aspect of this tirade is an implied death threat against our president.”

Alarming, yes, but not unexpected.  As we have reported time and time again, liberals across the country have called for Trump’s murder and the death of his supporters.

“I not only call on, but demand that Speaker Sara Gideon actually do something about her unethical and radicalized caucus. Is this language and behavior that she is willing to accept from Democrat Representatives?” Kouzounas asked. “She has a choice to make. I know what mine would be if I were in her position.”

A screenshot of his profanity-laden rant was captured and posted to Twitter:

Dem State Representative Scott Hamann of Maine: @realDonaldTrump will be a one-termer ‘If I ever get within 10 feet of that p*ssy.’ pic.twitter.com/JftzsYUVkD

This does sound like a credible threat of violence @SecretService

It does to us as well.

Another person posted a screenshot of another unhinged rant in which Hamann suggested he would sexual assault the wives or girlfriends of his critics.

Here he is stating he’d sexually assault someone pic.twitter.com/frX49c80eT

We agree the Secret Service needs to visit this creature.  Then he needs to pay an involuntary visit to the nearest mental hospital before he actually hurts someone.  This, by the way, is the kind of rhetoric that led to the shooting of GOP Rep. Steve Scalise by an unhinged Bernie Sanders supporter.

According to the Washington Times, Hamann apologized for his vile screed:

“I regret my impulsive decision to post something aggressively sarcastic and inappropriate in a Facebook exchange with a childhood friend,” he said in a written statement. “While the tone of the post was born out of frustration with the vile language currently surrounding politics, I should not have responded with the same language.

“This is not language I typically use, it does not reflect my personal values, and while misguided, it was intended to make a visceral point about the devolving political discourse in America,”

Sorry, we don’t believe it doesn’t reflect his “personal values,” especially since he came under fire in March for other comments he made about immigrants being attracted to the state by welfare benefits:

One of the lawmakers, Rep. Scott Hamann of South Portland, said that if there is evidence that welfare benefits attract immigrants to Maine, paying for the aid could be a good investment because the immigrants eventually become much-needed new workers who can help improve the economy. The comments were made March 2 during a four-hour work session of the Health and Human Services committee, which questioned LePage administration officials about proposals to cut welfare benefits for non-citizens, including some immigrants seeking asylum.

Yes, Virginia, this is the modern left and the modern Democrat Party.  Let that sink in.