HYPOCRITE! Schumer Supports Anti-Semites But Whines About Anti-Semitic Comment From 1/6/21 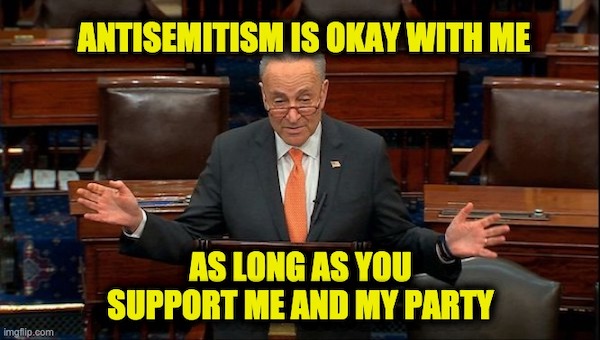 Senate Majority Leader Chuck Schumer, D-N.Y.,  said he was told a Capitol rioter called him “the big Jew” while pursuing him during the Jan. 6, 2021 attack

“I was within 30 feet of these nasty, racist, bigoted insurrectionists,” Schumer said. “Had someone had a gun, had two of them blocked off the door, who knows what would have happened. I was told later that one of them reportedly said, ‘There’s the big Jew; let’s get him.'”

I am happy that the senator did not get physically hurt, but complaining about an anti-Semitic slur is a joke. No one in Congress supports more Jew-haters than Chuck Schumer. Schumer doesn’t give a rat’s arse about Antisemitism unless it would hurt him politically.

When he came out agaObama’sama’s Iran deal, I began to believe there was hope for New York Senator Chuck Schumer.

After years of supporting the Antisemitic, anti-Israel president Barack Obama without complaint, was he putting his foot down? Did he finally realize, being Jewish himself and being the senior senator in the state with the largest Jewish population in the country, that he should fight hatred of Jews and hatred of Israel?

That one positive wasn’t the start of a new trend–it may have been an accident. You see, Schumer has proven he only cares about maintaining support from the leftist wing of his party and doesn’t have the guts to do the right thing–even to protect his fellow Jews here in the U.S.

During the first week of March 2019, the most liberal Congressional Democrats worked with the Congressional Black Caucus to block a resolution condemning the Antisemitism of Rep. Ilhan Omar and other Democrats. Instead, they passed a generic vanilla resolution that could have been written for Romper Room. All it said was being mean to others is a bad thing–doh!

Many objected to the DemocrParty’srty’s lack of courage. But not Senator Schumer. Speaking at the AIPAC convention two weeks later, he protected the haters in his Party with a claim the objections to the tepid resolution came from people who wanted to use Antisemitism as a political weapon. Wrong!

The objections were based on the fact that, like Schumer, Congressional Democrats didn’t have the guts to condemn Jew-hatred. Omar had just made the anti-Semitic claims that Jews had dual loyalty between America and Israel and that all Jews are rich (I kind of wish the last one was true, but it isn’t).

The Women’s March was planned and run by anti-Semites, BDS Supporters, and Farrakhan supporters. Did Schumer call them out? Did he tell them that hating one group won’t generate support for another? Nah, He supported the March and never commented about their hatred. In January 2017, he ABC’sABC’s Democratic party operative George Stephanopo “I’ll “I’ll tell you the depth and sincerity of the protesters that I saw really fortify” me.”

Really? Did it fortify him to organizers’ hatred of Jews here in America and Israel?

In  October 2019, the N.Y. Senator went to the 65th birthday party of Al Sharpton, a man who made a career of hating Jews. Schumer not only went to the party but gave a gushing toast to the Anti-semite.

At a time like this, we need Reverend Al like never before,” Schumer told the audience. “We quote the scripture, let not your heart be troubled. That’s what we believe. We are going to keep fighting the fight until we win. Until Donald Trump is no longer in power in any way and until America returns to its highest ideals. Let me make a toast to a man who, more than just about anybody else, who is working to make that happen, Rev. Al Sharpton. Lift your glasses to the birthday of the great and wonderful Rev. Al Sharpton.” 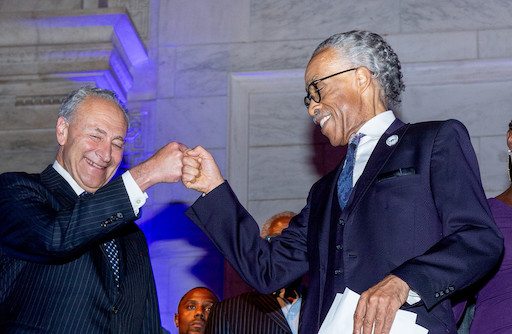 What did Schumer think was wonderful about Sharpton? Perhaps the senator took the Jew-haSharpton’ston’s advice and pinned his yarmulke back on before he went to the birthday party. Maybe the Senate minority leader thinks the Crown Heights pogrom, Freddy’s massacre, and Sharpton’s other anti-Semitic acts are “great and wonderful.”

Let’s talk about Schumer’s condemnation of his fellow Democrats’ support of the vicious anti-Semite Louis Farrakhan… Hear the crickets? Because he never said anything. Fighting Antisemitism won’t help him get votes.

Rep. Clyburn constantly uses the Holocaust as a political weapon, even to the point of trashing the children of survivClyburn’surn’s constant hyperbolic references to Hitler and the Holocaust cheapen the memory of the actual horrors that millions of people suffered through. Does Schumer speak out and ask Clyburn to stop? NO. Schumer said the exact same thing he said about the Democrats’rats’ support of Farrakhan—-more crickets.

Now that he has become Senate Majority leader, N.Y.’s Senator is going all out to support haters. In the Georgia Senate runoff, he supported Raphael Warnock, a hater of both Jews and Israel. And when Warnock won, Chucky publicly welcomed Warnock into the Senate. True, he had to greet him, but he didn’t have to do it publicly. But then again, who really cares about Jews, not Schumer. He is a JINO (Jew in name only).

What makes Warnock an anti-Semite? Here are a few examples:

If Schumer had any morals or guts, he would be distancing himself from anti-Semites like Warnock—but that wouldn’t help him politically so he doesn’t care.

What about Biden’s cabinet? Many of the people Biden picked for his team have an anti-Semitic or anti-Israel track record; Tony Blinken, Secretary of State, Reema Dodin Deputy Director White House Office of Legislative Affairs,  Avril Haines DNI, John Kerry Climate Czar,  Robert Malley Iran negotiator, Karine Jean Pierre Deputy Press Secretary, and others. Did the N.Y. Senator speak out? NO WAY! That would be God’s first miracle since the NY Jets won Super Bowl III.

Over the past six years, since he voted against the JCPOA, Schumer has proven that he doesn’t care about  Jew-hatred or hatred of the Jewish State of Israel. Someone who is silent about Antisemitism has no right to whine because someone made an anti-Semitic comment. A comment that he didn’t even hear. But talking about it on January 6, 2022, the day the Democrats want to use as a weapon against the GOP will help him politically.