Ambassador Yovanovitch Was Accused Of Obstruction Of Justice and Perjury 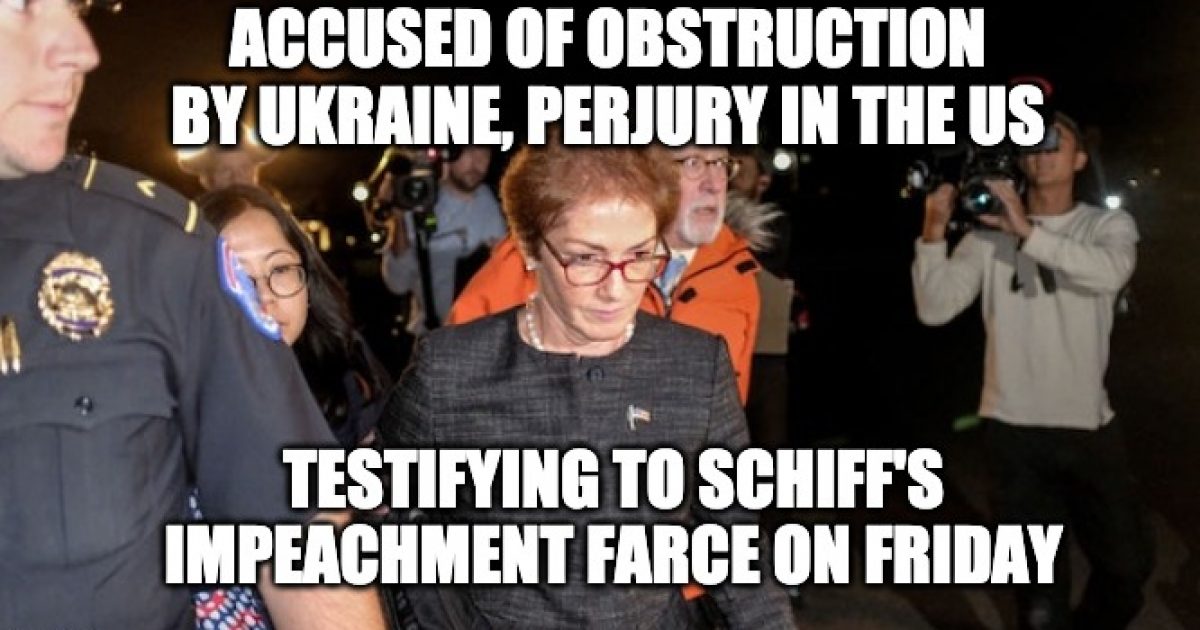 Friday the 15th of November is day two of Schiff’s impeachment farce. The star witness is US Ambassador to Ukraine, Marie Yovanovitch, who was fired by Trump on May 20th, two months before the July 25th phone call between President Trump and Ukraine President Zelinsky. She is being called just to smear President Trump. Yovanovitch has been accused by Ukrainian prosecutors of preventing criminal evidence from being given to AG Barr and was exposed as lying under oath during her testimony to Adam Schiff’s double Secret hearings in the congressional basement.

In April of this year, Kostiantyn Kulyk, deputy head of the Prosecutor General’s International Legal Cooperation Department, told John Solomon that “he and other senior law enforcement officials tried unsuccessfully since last year to get visas from the U.S. Embassy in Kiev to deliver their evidence to Washington.”

We were supposed to share this information during a working trip to the United States,” Kulyk told me in a wide-ranging interview. “However, the [U.S.] ambassador blocked us from obtaining a visa. She didn’t explicitly deny our visa, but also didn’t give it to us.”

One focus of Ukrainian investigators, Kulyk said, has been money spirited unlawfully out of Ukraine and moved to the United States by businessmen friendly to the prior, pro-Russia regime of Viktor Yanukovych.

Ukrainian businessmen “authorized payments for lobbying efforts directed at the U.S. government,” he told me. “In addition, these payments were made from funds that were acquired during the money-laundering operation. We have information that a U.S. company was involved in these payments.” That company is tied to one or more prominent Democrats, Ukrainian officials insist.

In another instance, he said, Ukrainian authorities gathered evidence that money paid to an American Democrat allegedly was hidden by Ukraine’s National Anti-Corruption Bureau (NABU) during the 2016 election under pressure from U.S. officials. “In the course of this investigation, we found that there was a situation during which influence was exerted on the NABU, so that the name of [the American] would not be mentioned,” he said.

As we reported in late March, the former Ukranian Government is known for being very corrupt, and that includes the head of the  NABU  Artem Sytnyk. A prosecutor other than Kulyk is investigating Sytnyk for trying to help Hillary to win the 2016 election, which was initially reported two years ago by Politico.  Because of the suspected involvement by NABU, which had a close relationship with the U.S. Ambassador and the FBI agents in Ukraine Kostiantyn Kulyk wanted to personally deliver the evidence to the DOJ rather than giving it to the American officials in his country.

What is hard to understand is there have been reports of senior Ukraine officials trying to help Hillary win the election for two years, why didn’t the U.S. Ambassador grant the prosecutor a visa. Was Ambassador Yovanovitch part of the deep state part of the plot to overturn the 2016 election? It seems like it. And what has happened to the information since May? Is interim Ambassador Bill Taylor who testified Wednesday holding things up now?

Yovanovitch seems to have lied when she testified to Schiff’s underground double-secret hearings.

During her October deposition to the House Intelligence Committee,  Yovanovitch told U.S. Rep. Lee Zeldin (R-NY) under oath, about the email she received Congressional staffer, Laura Carey, adding that she never responded to it.

Per Tucker Carlson, she did respond, but using her personal email she used her personal email account to respond to Laura Carey just two days after the “whistleblower” filed the complaint, and about a month before it became public and ignited the lastest Democratic Party effort to change the results of the 2016 election.

The “emails obtained by Fox News’ “Tucker Carlson Tonight” showed that in fact, Yovanovitch had responded to Carey’s initial Aug. 14 email, adding that she “would love to reconnect and look forward to chatting with you.”

On Aug. 14, Carey reached out to Yovanovitch before noting that Carey had resigned from the State Department to join the House Foreign Affairs Committee staff performing oversight work. Aug. 14th was two days after the whistleblower complaint was filed and a month before that complaint became public. But we also know the whistleblower went to Adam Schiff’s team before filing the claim. The question is, did Schiff’s office tell other Democrats on Capitol Hill what was in the complaint? And was that the “quite delicate” and “time-sensitive”  matter that Ms. Carey wrote Yovanovitch

“In fact, it turns out that she did respond.In fact, she said she ‘looked forward to chatting with you’ to that staffer. And as Congressman Zeldin pointed out, the ambassador’s original answer, which was dishonest, was given under oath.” And that, folks, is called, “perjury.”

Zeldin told Tucker Carlson on Thursday it was “greatly concerning” that Yovanovitch may have testified incorrectly that she did not personally respond to Carey’s email. Note: “Testifying incorrectly” is a nice way of saying she lied.

“I would highly suspect that this Democratic staffer’s work was connected in some way to the whistleblower’s effort, which has evolved into this impeachment charade,” Zeldin said. “We do know that the whistleblower was in contact with [House Intelligence Committee Chairman] Adam Schiff’s team before the whistleblower had even hired an attorney or filed a whistleblower complaint even though Schiff had lied to the public originally claiming that there was no contact. Additionally, while the contents of the email from this staffer to Ambassador Yovanovitch clearly state what the conversation would be regarding, Yovanovitch, when I asked her specifically what the staffer was looking to speak about, did not provide these details.

(…)I specifically asked her whether the Democratic staffer was responded to by Yovanovitch or the State Department. It is greatly concerning that Ambassador Yovanovitch didn’t answer my question as honestly as she should have, especially while under oath.”

Ambassador Yovanovitch has denied that she obstructed evidence of the Democratic Party and Hunter Biden crimes from reaching A.G. Barr. Is that a lie also?

Will the GOP questioners ask about either of these accusations.