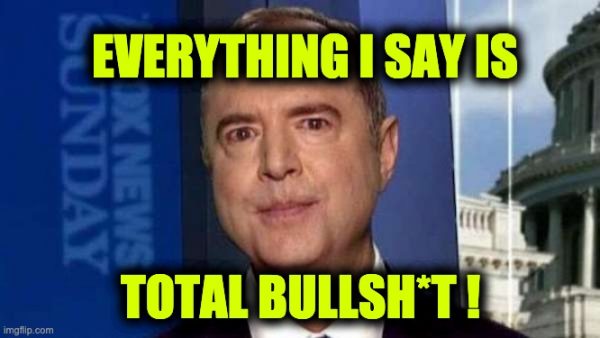 Rep Adam Schiff  (D-CA) is the political version of Jan Brady from the Brady Bunch. But instead of Marcia, Marcia, Marcia, his motto is Russia, Russia, Russia. While appearing on CNN’s Situation Room,  The Bug-Eyed Bull-Sh**ting Bloviating Barrister Of Burbank (Schiff) claimed — without any evidence — that the blockbuster reports of Hunter Biden’s emails come from the Kremlin.

“We know that this whole smear on Joe Biden comes from the Kremlin, that’s been clear for well over a year now that they’ve been pushing this false narrative about this vice president and his son,” he told Wolf Blitzer.

“The idea that the president, the White House counsel and others were made aware that Giuliani was being used by Russian intelligence and using Russian intelligence, in the sense of meeting with an agent of the Kremlin and pushing out this Kremlin narrative, the idea that they were knowing and still on the floor of the Senate during the impeachment trial pushing this Kremlin narrative is pretty breathtaking. But at this point, we can’t be shocked anything this administration does, no matter how craven,” he added.

Of course, this ignores the facts on the ground that we’ve learned over the past few weeks, such as the fact that the entire Russia Hoax was started by the Clinton campaign.

Here’s a video of Schiff’s comments to Blitzer:

Rep. Adam Schiff says he’s concerned that he hasn’t “gotten much from the intelligence community” on Russia peddling disinformation.

“At times, some of the leadership, like Director Ratcliffe, not been very forthcoming in terms of the intelligence on the Russian threat.” pic.twitter.com/JhcVYlCgcf

Byron York “seems to think the interview would have been stronger if Schiff had provided Blitzer any evidence to back up the claim the Biden story was fake and that it came from Russia.  But that is the way Schiff works. There were many times during Trump’s first three years in office that Schiff claimed on national TV to have proof that the President colluded with Russia. He never provided the proof because he was lying.

York tweeted out a transcript of the discussion.

There isn’t one scintilla of proof that the story came from Russia. In fact, the latest set of incriminating Hunter Biden emails have been independently confirmed by other news organizations.

Shiff is also ignoring the fact that the NY Post story is just the latest in a long line of investigative stories about Hunter Biden and Joe Biden getting rich off Ukraine and China. For example:

Schiff has been doing his best to cover these and other reports up and/or pin them on President Trump and Russia.

Keep in mind, Ukraine HATES Russia, who if these stories were lies that came from Putin, they wouldn’t remain silent. A previous president, Viktor Yanukovych, was seen as a Putin puppet, and when he was ousted in 2014, Russia invaded and annexed Crimea, part of Ukraine.

The Washington Times reports that the owner of the repair shop told the Senate about the Hunter Biden laptop two weeks before the NY Post report:

But in a letter Saturday to FBI Director Christopher A. Wray, Senate Homeland Security and Government Affairs Chairman Ron Johnson disclosed that the shop owner, identified in media reports as John Paul Mac Isaac, told the panel directly that Hunter Biden dropped off the machine.

It would be a federal crime to mislead a congressional committee on such an important fact.

Mr. Johnson, Wisconsin Republican, said that on Sept. 24, the day after his committee issued a report on how Hunter Biden had profited off his dad, Vice President Joseph R. Biden, “a whistleblower contacted my committee and informed my staff that he had possession of a laptop left in his business by Hunter Biden.”

This would appear to discredit allegations from Rep. Adam Schiff, California Democrat and chairman of the House Permanent Select Committee on Intelligence, that the emails are a Russian disinformation operation.

Schiff is both a liar and a leaker. He has been inventing tales about President Trump since he took office in January 2017. It’s time for the FBI to investigate him.