VIDEO: Schiff Claims if Trump Isn’t Impeached He Might Give Alaska to the Russians

(Will They Take Schiff For Free?) 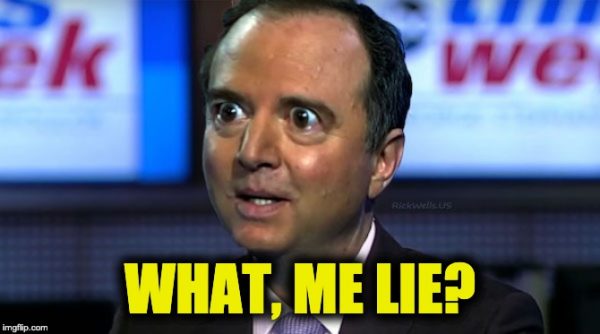 Granted, we’ve heard tons of lies and crazy speak from Adam Schiff,  The Bug-Eyed Bull-Sh**ting Bloviating Barrister Of Burbank, but this one must break a record—even for him. During Monday’s Senate trial closing arguments, he actually claimed that if acquitted, President Trump might sell Alaska to Russia if they successfully rig the 2020 election in his favor. AND if reelectedTrump might reside at Mar-A-Lago and let his son-in-law, Jared Kushner, run the nation. If I made that up people wouldn’t believe me. Schiff Alaska Russians

“If abuse of power is not impeachable … Trump could offer Alaska to the Russians in exchange for support in the next election or decide to move to Mar-a-Lago permanently and let Jared Kushner run the country, delegating to him the decision whether to go to war,”

As for his second charge, whether one agrees with President Trump’s policies or not, one thing cannot be argued, he is the hardest working President America has seen in a long time. He won’t retire to Mar-a-Lago until after the 2025 inauguration when he turns over the Presidency to someone else.

I wonder if someone could convince the President to sell Adam Schiff to Russia or any other country in the world to take him. Heck, even give Schiff to anyone who would take The Bug-Eyed Bull-Sh**ting Bloviating Barrister Of Burbank off our hands. What if he asked Beijing to take Schiff as part of the Phase II China deal? I bet Iran would take him, he supported the Obama Iran deal.  Nancy Pelosi would also want to give Schiff away based on how his Impeachment scam made her look

When Schiff was done inventing stories about what President Trump will do when he is re-elected, he lied about what Alan Dershowitz said a few days earlier.

“So, Mr. Dershowitz tried to embellish his legal creation and distinguish among those abuses of power which would be impeachable from those which wouldn’t. Abuses of power that would help the president get re-elected were permissible and therefore unimpeachable, and only those for pecuniary gain were beyond the pale. Under this theory, as long as the president believed his reelection was in the public interest, he could do anything and no quid pro quo was too corrupt. No damage to our national security too great. This was such an extreme view that even the President’s other lawyers had to run away from it.”

But it’s hard to get away with lying about the former Harvard Law professor, on Monday evening Dershowitz answered Shiff in the WSJ:

What did I say to warrant such demonization? I was asked whether it matters “if there was a quid pro quo.” I answered that it would depend on “if the quo were in some way unlawful.” If the politician’s motive was “corrupt”—for example, if he sought a kickback—that would be an impeachable crime. But if his entirely lawful act had “mixed motives,” including re-election, that would not turn a lawful act into a crime or impeachable offense.

I observed that all politicians act out of mixed motives: They seek to further the public interest with an eye toward the ballot box. A desire to be re-elected is not necessarily a “corrupt” motive. I also said that if the politician sought anything—a “quo”—that was “in some way illegal,” that would “make a quid pro quo unlawful.”

The main thrust of my hourlong opening presentation was that a president could be impeached if he committed crimes or criminal-like behavior, regardless of whether his claimed motive was the public interest. I made this self-evident point in response to arguments by House impeachment managers that mixed motives could turn innocent conduct into a crime, and that a motive to help one’s re-election could be corrupt. I never suggested that if a politician believed that his re-election was in the public interest, that would excuse criminal or impeachable conduct.

Watch the video of Schiff’s latest lies below: