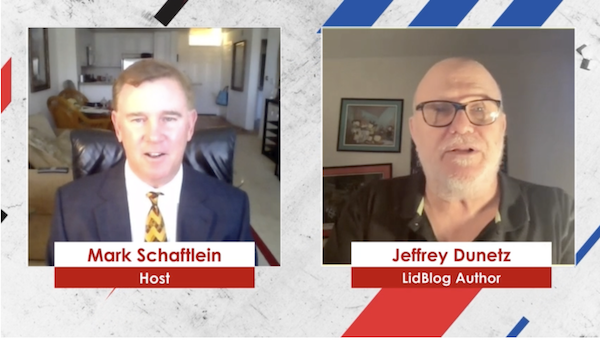 I had the honor again of being the guest of Mark Schaftlein on his program The Schaftlein Report. Mark and I had a great conversation, giving our unique perspective about the latest issues of the day. Including Schaftlein Report infrastructure

1) Miami Condo building partially collapses
2) Rudy Guiliani law license suspended by NY
3) Biden incoherently warns gun owners the government has F-15″ and nuclear weapons. Why?
4) America ranks last among 46 countries in Media Trust. Go figure?
5) From the Insane Asylum – “Not having Transgenders in the military undermines National Security” – Deputy Press Secretary Karine Jean-Pierre
6) Biden gets a 41% approval rating on his handling of Immigration and 39% on China – Why is Immigration so high for a total failure?
7) CA Secretary of State approves Signature verification of 1.7M for Gavin Newsome recall.
8) CDC extends the Eviction ban a final time for 30 days – Landlords have families to feed too.
9) 12 of the top 15 states leading the economic recovery have Republican Governors, while 7 of 10 bottom performers are led by Democrats
10) Senator Kennedy ridicules the Biden Administration on crime due to Defund the police and blaming cops, not criminals.
11) Update from Israel on the new government

Make sure to watch Mark’s program every weekday, It’s posted at  8PM on the Schaftein Report website https://schaftleinreport.com/ or on the Shaftlein Report’s Facebook page, which can be found by clicking here.

Watch the show below– I promise you will find the program entertaining, informative, and at times a bit snarky (it wouldn’t be The Lid without some snark).