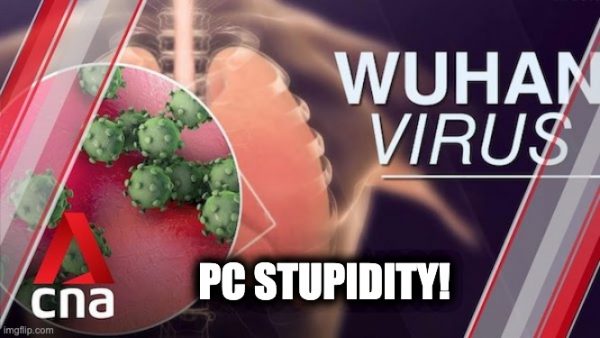 Journalists and the World Health Organization are being “useful idiots” promoting Chinese propaganda. Apparently calling the COVID-19 virus, the Wuhan Virus is now considered racist. These are the same “journalists” that insist that Trump joking at a rally asking for Hillary’s emails was “collusion.”

A few days ago, the politically correct World Health Organization (WHO) was very concerned about the “stigma” that could occur when talking about the COVID-19 virus that has spread all over the globe.

DO – talk about the new #coronavirus disease (#COVID19)

DON'T – attach locations or ethnicity to the disease, this is not a “Wuhan Virus”, “Chinese Virus” or “Asian Virus”.
The official name for the disease was deliberately chosen to avoid stigmatizationhttps://t.co/yShiCMfYF3 pic.twitter.com/belHrq5HVo

I mean, you wouldn’t want to bring attention to the fact that it did start in Wuhan and that the Chinese government didn’t do much to stop the spread of it early on.

After it was revealed that someone who attended CPAC tested positive for Coronavirus, Rep. Paul A. Gosar(R-AZ) announced on Sunday night that he would self-quarantine after he had “sustained contact” with that attendee. In his tweet, he used the term “Wuhan Virus” which was what the virus was called early on.

Many praised the controversial Arizona congressman, who along with Sen. Ted Cruz (R-Tex.) is one of two members of Congress in isolation, for taking precautionary measures despite not showing any symptoms. But many more objected to his choice of words: On his personal Twitter account, Gosar called covid-19 “the Wuhan Virus.”

“While I appreciate you self-quarantining and making a responsible decision, you don’t need to throw out dogwhistle racist terms while you do it,” said one typical response.

Most people call it the coronavirus.

But only the most ignorant and racist among us would call it the Wuhan virus.

If Dr. Gu’s name sounds familiar, he is the one who came up with this imbecilic tweet during the Kavanaugh hearings claiming that the Judge’s Mexican Jewish former law clerk was a white supremacist:

Kavanaugh’s former law clerk Zina Bash is flashing a white power sign behind him during his Senate confirmation hearing. They literally want to bring white supremacy to the Supreme Court. What a national outrage and a disgrace to the rule of law. https://t.co/uQGOpNa6xg

Which is what I reminded Dr. Gu:

Do you call Rubella, German Measles? Do you still believe Justice Kavanaugh's Mexican Jewish former law clerk is a white supremacist? Have you been checked for Alzheimer's ?

As always, Rep. Ted Lieu(D-CA) who can be counted on for all of the absolute worst virtue-signaling takes weighed in on Dr. Gosar calling it the Wuhan Virus:

Dear @DrPaulGosar: I will pray for you, your staff & the person hospitalized.

Also, calling #COVIDー19 the Wuhan Virus is an example of the myopia that allowed it to spread in the US. The virus is not constrained by country or race. Be just as stupid to call it the Milan Virus. https://t.co/of91p65mIO

What an idiot. Using a so-called “racist” term somehow allowed the virus to spread in the United States. MSNBC’s Chris Hayes still in mourning because Chris “Mr. Tingle” Matthews was “quitted” jumped on the “That’s racist!” bandwagon.

Just astoundingly gross to call it the Wuhan Virus. https://t.co/cMrsA59xTH

David Gura, a lefty journo whose Twitter bio includes contributions to MSNBC, NBC News, Bloomberg TV, Marketplace, and NPR had expressed the same opinion — that referring to COVID-19 as the “Wuhan Virus” was racist.

The replies explained that that was an absolutely ridiculous tweet. Ian Miles Cheong, who happens to be Chinese, responded to Gura.

Here's what Chinese in Asia are calling COVID-19: "Wuhan Virus."

So no, it isn't racist. pic.twitter.com/06U2RYyrPL

But Cheong wasn’t finished with Gura…

Those in the media have been the ones calling it "the Wuhan virus/coronavirus" for weeks, so I guess they were being racist/bigoted this whole time. pic.twitter.com/ibogMw3rK0

CNN has been particularly racist… if that’s what we’re calling it now.

All named after places

The irony is that the term “Wuhan Virus” was trending on Twitter.

I’m not an expert on the Internet, but I feel like the quickest and easiest way to ensure it is forever known as “Wuhan Virus” is to tell the Internet not to call it that. https://t.co/XXTrYThxsG

I don't think Mexico cares about political correctness all that much. pic.twitter.com/teQiR5AQUl

See, saying “Wuhan Virus” isn’t anything like a song and dance number with a child dressed as the Coronavirus wearing a bamboo hat and sporting a Fu Manchu while other children dressed as doctors chase it with a syringe.

But I’m sure that the liberal media betters are oblivious to the difference between the two.

As the firefighters in the liberal Media vent their spleens on anyone who says “Wuhan Virus” now that it’s been labeled COVID-19 over a month after the outbreak began, China is busy trying to distance themselves from being the epicenter of a massive viral illness outbreak… again.

China is now demanding an apology from the world on behalf of the sacrifice their people made dealing with Wuhan virus first pic.twitter.com/rRzxD9JrfY

Some are even going so far as to claim that the CIA planted COVID-19 in Wuhan.

The Chinese are actively stoking the theory that the virus is a CIA plant to absolve themselves of any responsibilityhttps://t.co/BzPWmTsCzF

Contrary to the absurd idea that #wuhanvirus is a racist term, it may be a necessary one to prevent an Orwellian rewrite of history underway by some in PRC, as noted by @washingtonpost: https://t.co/5Wlic0cfPO

But why would China be spreading conspiracy theories like that?

And it wasn’t a Jewish mother’s chicken soup.

So, as usual, everything is stupid and we’re all supposed to kowtow to the authoritarian Chinese government and not ask any questions.

Meanwhile, our liberal Media is stoking fear that this is The Pandemic that will wipe out half the population (or whatever) and that is leading to a shortage of toilet paper as people are stockpiling it.

But at least some shop owners can find the humor in this insane situation.

I don't know what store this is from, but God bless them. pic.twitter.com/aHQVP68Qwk

Remember, don’t touch your face, wash your hands for 20 seconds, use hand sanitizer, and don’t buy all of the damned toilet paper in Sam’s Club!