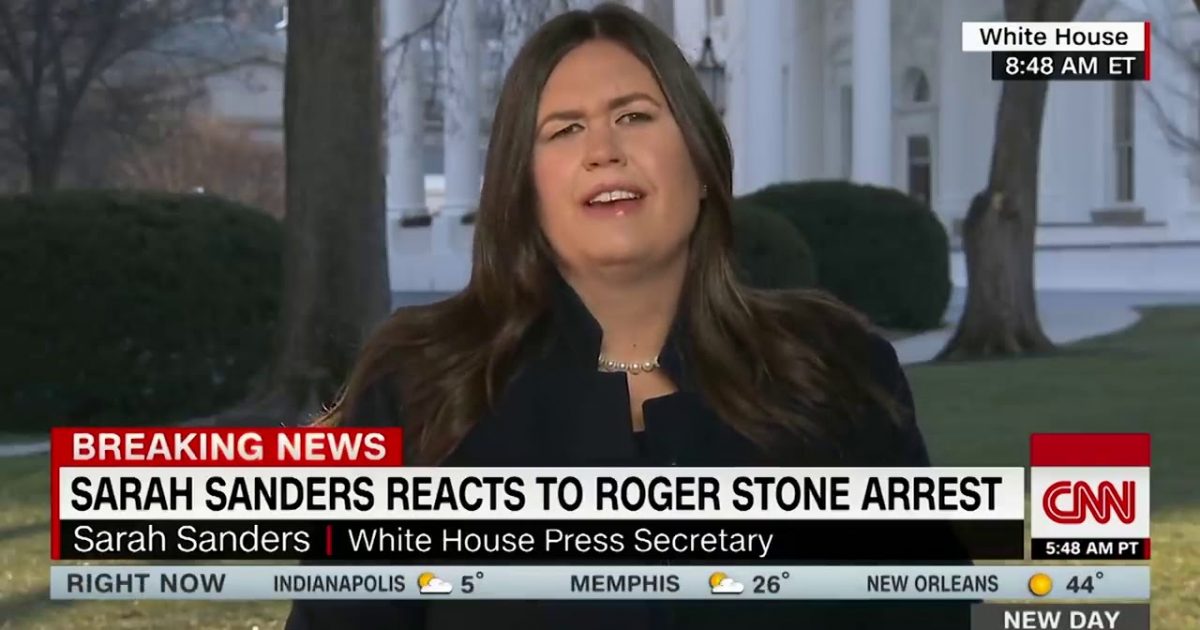 “I never did give them hell. I just told the truth, and they thought it was hell.” Harry S Truman

Starting with John Berman at CNN, the network that just “happened” to be at Roger Stone’s house when the FBI showed up to arrest him.

Berman asked Ms. Sanders what she thought of the arrest of Stone. She correctly said it had nothing to do with the administration, the charges “were about whether or not he made false statements. We’ll let the courts make the decision,”

She continued with, “A bigger question is: If this is the standard, will the same standard apply to people like Hillary Clinton, James Comey and [James] Clapper?” All of whom lied to Congress.

Longtime Trump associate Roger Stone was arrested Thursday night for one count of obstruction, five counts of false statements and one count of witness tampering as part of the larger special counsel Russia investigation. The FBI raided his home and “terrorized” his family, Stone said outside a Florida courthouse Friday. He told a crowd of hecklers he plans to plead not guilty to the alleged crimes.

Of course, White House Press Secretary Sarah Huckabee Sanders expected the press pool to ask her for her reaction to Stone’s arrest. But she wasn’t a fan of how some reporters framed their inquires, particularly the individual who suggested that President Trump encouraged Stone to lie to Congress

Reporter: "Was the president encouraging false statements, obstruction, things that are charged in the indictment?"

Sanders: "That is probably one of the more ridiculous and insulting questions… frankly, it's just insulting, it's just not true" pic.twitter.com/SbHqQKceby

Comey is the one who said that he wouldn’t prosecute Hillary…and both lied to Congress. Noticing a trend yet? Is anyone else getting tired of nothing getting done? What are we supposed to do when we watch biased federal agencies punish political opponents while letting blatant criminals go scot free?

Mueller and the FBI need to be brought to justice! Their tactics and motives are unlawful in America! This is what our founding fathers fought against when they wrote the Bill of Rights and the Constitution! This is injustice. They protect the guilty by going after the innocent!

Continue to give ’em hell Sarah!