San Jose Fighting Against Trump’s Wall, But Is Building Wall Of Their Own To Keep Out—AMERICANS 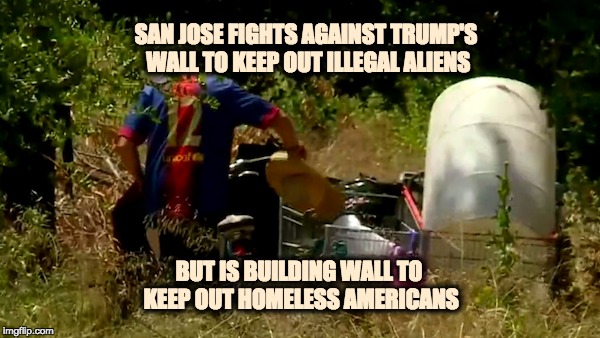 The city of San Jose, Ca. has hosted protests against the President’s wall proposal, and has a representative in congress who’s introduced legislation to stop the border wall. But gotta hand it to the Democrats,  they never miss an opportunity to be hypocritical. Residents of the city where approximately 47% of its registered voters are Democrats (vs about 21% Republicans) are demanding a bigger and stronger wall, not to keep out Illegals, but to keep out homeless Americans.

SAN JOSE (KPIX-5) — Caltrans [California Dept. of Transportation] is building a taller, stronger wall in San Jose to stop homeless individuals from returning to an encampment.

Caltrans has repeatedly cleaned up the large encampment under I-280, but the homeless keep returning.

Laura Nunez, who has lived on Macredes Avenue in San Jose most of her life, said everything changed on her street when homeless people began using the rickety chain link fence at the end of the block as a doorway to their encampments along I-280.

Maybe I’m not remembering this right…but when President Trump talks about the wall between the U.S. and Mexico, isn’t part if his reasoning to prevent drugs from entering the country?  But these San Jose folks want a wall to keep drugs out of their neighborhood.  Isn’t that racist?

Caltrans and the city heard the neighbors’ complaints and on Monday, workers were out building a taller barrier at the freeway on-ramp and on Macredes Avenue.

Wait a second!  I thought liberals want to help the poor. Oh that’s right only when they can be moved into Republican areas.

In case you were wondering this is the same San Jose that hosted rallies against President Trump’s stance on illegal immigrants and building a wall on our southern border, which suggests they only like walls that keep out Americans.

But this anti-Homeless wall be taller, (8-foot-tall) stronger and “has smaller holes, which makes it difficult to cut or climb.” The residents hope they will keep those homeless people out.

Advocates for the homeless are comparing the San Jose wall to President Trump’s border wall:

Jaime Foberg, the founder of “In Their Shoes” homeless advocacy said, “I think of Trump. And I think how horrible it is that they would keep people out. It really does make me sad.”

But Laura Nunez who is quoted above says,  “Take them to your neighborhood and you live the way we’ve been living the past few years, and then you’ll sing a different tune after that.”

But Ms. Nunez may get some push back from her Congressional Representative Rep Zoe Lofgren. On her website she brags about fighting against the President’s border wall proposal:

Zoe introduced the Protecting Our Border Communities Act (H.R. 920) to render Trump’s executive order to begin construction on a southern border wall null and void. Trump’s wall does virtually nothing to protect border security, damages our economy, and squanders billions in taxpayer dollars.

But Zoe, why is President Trump’s wall build to keep out illegal immigrants–bad-–but the wall to keep out homeless Americans–good?

Perhaps Zoe’s district would be betters served if instead of fighting the president, she worked with local authorities to build a homeless shelter. After all that would make the San Jose  wall unnecessary.